Google’s I/O keynote may have been a bit of a jumble of different product announcements — many of which won’t be available until later this year — but Android Wear was what most people in the audience wanted to hear about. While there is plenty of Android in Google’s smartwatch operating system and while developers will be able to develop apps specifically for it, Wear in its current form is fundamentally about bringing Google Now notifications to your wrist. 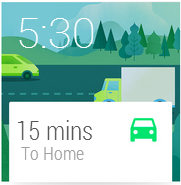 Android Wear, of course, also shows you all of your notifications from your phone (and when they are interactive, Wear will automatically mimic those, too). You could push all of your phone notifications to your watch, but that would be overkill. Thankfully, Google lets you choose which applications can push to Wear. But its most useful feature — and maybe its killer feature overall — is definitely easy access to Google Now.

At this point, everybody is pretty much familiar with Google Now, but there is something fundamentally different between using it on your phone and on your wrist. Sure, the mission is the same on both platforms: Google wants to give you the right information at the right time. When you’re at work, it shows you the drive time to home. Got an appointment somewhere else? It’ll show you when to leave. At the airport? It’ll show you the barcode for your boarding pass. It’s one thing for that information to be available on your phone, but on your wrist, it suddenly becomes so much more accessible. 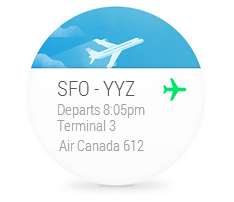 That is, of course, only when Google Now gets it right — and most of the time, it does. The company has been working hard on bringing more information to Now and that has made it quite a bit more useful by regularly adding more information and new cards to it. Some cards that Google shows on the phone don’t make sense on Wear (links for topics you recently search for, for example) and those thankfully never make it to the watch.

Wear doesn’t always get it right, though. If you end up swiping the weather card away by mistake, for example, you can’t easily get it back. That’s a fundamental problem with Wear — and maybe the only one that really annoys me. For Google Now, at least, it’d be nice to have an easy way to flip through all of your cards at all times.

Just like Google Now brings together a number of Google’s services into one product, Wear has a similar feel to it. It’s a mix of what it has learned from Android and its ecosystem, its advances in voice recognition and its newly found design chops.

All of that comes together to bring Google Now to your wrist, and while that may sound like a minor thing, it’s actually a very useful experience. Whether that’s worth $200 to you is a different question, but after using Wear for a bit more than a week now, I can actually see myself wearing one of these watches going forward — and before this I hadn’t worn a watch for at least a decade.

In the next few months, Google will get some competition from Microsoft, Apple and a few startups in this space. For better or worse, none of them know as much about you as Google does, so it’ll be hard for them to replicate the Google Now experience. That should give Google a bit of an edge against the competition — unless the iWatch turns out to be so amazing that people will buy it even if it just shows the time and phone notifications.