A new application launching today on the iTunes App Store wants to make mobile shopping – including organizing products you like from multiple stores and receiving price drop notifications – as simple as taking a screenshot on your phone. SnapUp, as the app is called, is able to automatically identify and recognize the products you save as screenshots in your iPhone’s Camera Roll, allowing you to then move those products into lists, keep track of sales and other deals, and then finally buy when the price is right.

The San Francisco-based startup was founded around a year ago, and is headed up by engineers Dan Cheung and Eric Goldberg, a One Kings Lane alum and the first engineer at StumbleUpon, as well as Shan Mehta, whose background is in e-commerce, banking and investing.

Originally Cheung and Goldberg were working on a service that would help consumers find cool and interesting products, but after Mehta joined the team, they decided to shift their focus to mobile. “The biggest problem in mobile – from a consumer standpoint – is that there’s no way to bookmark anything,” explains Mehta of the challenges faced when mobile shopping. “In order to bookmark something you need to have it work inside each app, and each app has a different UX [user experience] for bookmarking something or sharing it,” he says.

After brainstorming, the team came up with the idea to make bookmarking easier by using screenshots.

Taking a screenshot on the iPhone is easy – you just press on the power button and the round home button at the same time.

At SnapUp, the team developed technology that can identify the product and the store from a mobile screenshot, which is a fairly notable technical feat since the image itself won’t necessarily include information about where the product is from, or a URL to reference. On the mobile web, SnapUp can identify just about any product sold by an online retailer. Meanwhile, they’ve trained their algorithm to “fingerprint” around 400 native mobile applications.

After installing the app, it will ask permission to access your Camera Roll, which allows it to find and identify those screenshots you save. These are then imported into SnapUp, where you can title them, edit them, organize them into wish lists, and began to track price changes. 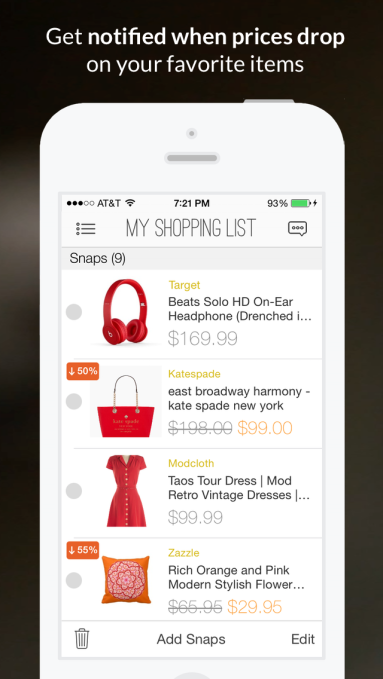 However, besides its clever screenshotting identification trick, one could argue that the feature set SnapUp provides has a lot of overlap with something like Pinterest. Instead of lists, Pinterest users create Boards. And on Pinterest, consumers can watch for price changes through the service’s price alerts notifications feature.

But Mehta positions SnapUp as more of a real-world, everyday tool, versus Pinterest’s “inspirational” image collections.

“One thing we’re trying to get across with the app is high utility,” he says, adding that they’ve even stripped out a lot of the social features from SnapUp.

“We don’t want you to just be snapping beautiful, inspirational stuff – we just want you to snap stuff you’re actually going to buy…it might be diapers, it might be cosmetics – but whatever you really want to buy,” he says.

We hear another round may be closed in just a few months’ time.

For now, the company is focusing on testing the product with consumers to see what sort of traction it will receive, and what other features users may want. And while, today, SnapUp uses affiliate links to help it track conversions and bring in initial revenue, eventually other business models, including making SnapUp a paid app, will be considered.