If you’ve had kids (or are a proud uncle multiple times over, like me) you’ll know those little bundles of joy grow up fast. Really fast. And with those unstoppable growth spurts comes a lot of outgrown clothing and a large hole in your pocket to boot.

Hand-me-down clothing provides the obvious solution, but that requires having lots more children to scale. A much better solution would be an online marketplace giving parents a place to sell pre-owned kids clothing or pick up a bargain at the other end.

Enter Spain’s Percentil, which has closed a €1 million series A round of funding to expand its online kids’ clothing “consignment shop” to more of Europe — it currently operates in Spain, where it first launched, and has since added Germany and France. The round was led by European VC Active Venture Partners, and adds to the more than €1 million previously raised in a multi-part seed round from Cabiedes & Partners and others in 2013.

Meanwhile, the Madrid-based company also plans to use the additional capital to move into another “pre-loved” vertical, namely women’s clothing. 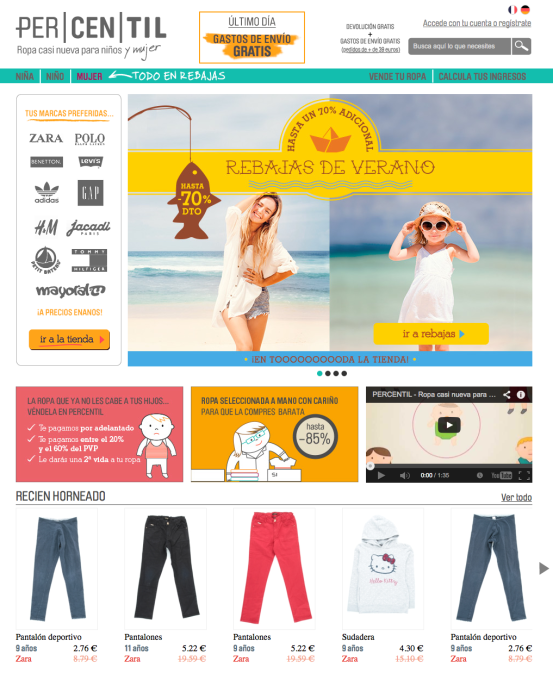 Percentil’s current mission is to help families save money while buying and selling kids pre-used clothing, with a specific focus on high quality apparel. It does this by buying “nearly-new’ kids clothing from families and then offering up those items through it’s own online store, sharing a cut of the sale price with the original owner.

But, perhaps more important to its model is the startup takes care of all the logistic, such a pick up and delivery, and quality control, ensuring the whole process for buyers and sellers is as frictionless as possible.

“[The] key problem we solve is give parents access to high quality kids fashion at heavy discounts,” Percentil co-founder and CEO Luis Ongil tells TechCrunch. “At the same time we allow them to easily monetize the lightly used clothes they have in their kids’ closets; kids grow too fast and their clothes stay behind sometimes unused, so we give this massive inventory an outlet and pay a fair price for those items we then sell in our e-shop across Europe.”

The market opportunity is pretty big, too. Percentil reckons parents spend on average almost €500 per child each year — which certainly sounds plausible — and this equates to a global market of €110 billion. Though, of course, the startup is only operating in three European countries right now.

Competitors include U.S.-based ThredUP, which pioneered Percentil’s model, including expanding from kids’ clothes to cater for women, too.

In Europe, there’s also Vintykids.com — which, unlike Percentil, only hands over cash once an item of clothing has been sold — and local competitors, Kirondo.de (Germany) and Patatam.fr (France).

On the subject of its business model, Ongil says: “We buy the items from families we then process and put for sale in our site. The ‘for sale’ price is a markup from our cost that allows us to make money while still selling the item at a heavy discount from its original price when it was bought new at a store.”

Percentil claims to have received more than 40,000 orders from 15,000 customers, since setting up shop in 2012, with parents earning €500,000 in total via selling nearly-new clothes on the site.