Social networking platform Twitter says its MoPub ad network now reaches more than 1 billion iOS and Android users every month, and so today it is making its latest move to build out that mobile advertising business with more products.

Twitter is kicking off the global rollout of mobile app promotion ads — units that either take users to app downloads, or to the apps themselves if they’re already installed, via a deep link. Along with that, Twitter’s unveiling new cost-per-app-click pricing for the unit and a dashboard to track usage.

CPAC pricing basically means a publisher will only be charged when a user actually goes to the App Store or Google Play from the ad, or when the user opens the app directly from Twitter.

Mobile app install ads have been running in beta on Twitter since April this year, and the company has been talking about them for much longer.

Twitter is not the only one: as app publishers continue to look for new ways to acquire users and get their apps seen in outsized app stores, Google has also recently turned on app install ads in search and on YouTube. On Facebook, these kinds of ads have been known to drive tens of millions of downloads.

But for Twitter, the interesting thing here too is that the intention will be to take this add unit elsewhere, too.

“This announcement is for Twitter only but in future we are interested in driving deeper integration between Twitter and MoPub, and to extend mobile app promotion further,” Kelton Lynn, a product manager overseeing revenue at Twitter, tells me.

In the beta phase, as detailed in a blog post Twitter is putting up today, the ads have not seen quite such huge numbers as perhaps Facebook gets, although it’s just a beta start: The mobile game Dots, for example, used the unit to promote a new version called TwoDots, which saw over 1 million app installs from the trial, the company says.

On Twitter, the new unit will now become more widely available not only in the U.S. but in the rest of the markets where Twitter is active.

However, there will be limits to the ad unit. Namely, it will appear only for iOS and Android mobile users. Those who are on Windows Phone, BlackBerry will not be served these ads, and nor are there plans to add them in the near future. (They’ll see Promoted Tweets instead, I gather.)

“It’s a reflection of the usage of Twitter,” Lynn says. “The majority of usage is on Android and iOS.”

The move to expand the kinds of mobile ads that Twitter offers to brands and agencies speaks to how central smartphones and tablets are to the company’s strategy for revenue generation. Twitter says that in the last quarter it made about 72 percent of all its revenues (equivalent to $181 million out of total revenues of $250 million) from mobile advertising.

On top of the app install ads, Twitter will also be expanding the kinds of reporting and analytics that app publishers will get around them.

The company says that keyword targeting in the ads will follow that of its other mobile units, with publishers able to set placement based on interest, keyword, gender, geographic location, language and mobile device, among other things.

As the unit is based around Promoted Tweet app cards, publishers can further customize with their own images and description or those of the app’s icon and anchor text from a respective app store.

Conversion tracking, meanwhile, will let you track different actions, from installations and app openings, to sign ups and purchases in the case of paid apps. 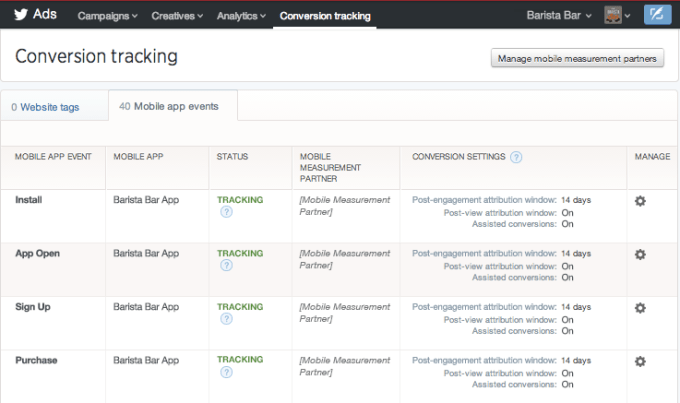