Chromecast, Google’s popular $35 dongle that plugs into your TV’s HDMI port, letting you stream video and music to your television, received a number of updates today, Google announced this morning at its I/O developer conference. The most notable updates include support for mirroring your Android device’s screen to your TV, a new, interactive background display feature called “Backdrop” and support for streaming from device to TV even when you’re not on the same wireless network.

Google says it has been “blown away” by Chromecast’s performance, which is now outselling every other streaming device, the company claims. That’s likely due to its low price point, which makes experimenting with Chromecast more of “oh, why not?” kind of purchase, rather than a thoughtfully considered investment, like rival Apple TV.

“YouTube sees more active engagement on Chromecast than on any other type of device,” noted Chromecast Director of Product Management Rishi Chandra, before announcing that Google would now work to make its ecosystem of Chromecast-enabled apps more easily discovered through a dedicated site, Chromecast.com/apps, as well as a dedicated section of its Android app store.

One handy improvement to the Chromecast software is that the system will no longer require your device to be on the same Wi-Fi network in order to “cast” to the TV. That will be useful when friends and family come over, for example, and you don’t want to scrounge up your Wi-Fi password (or just don’t want them to have it.) 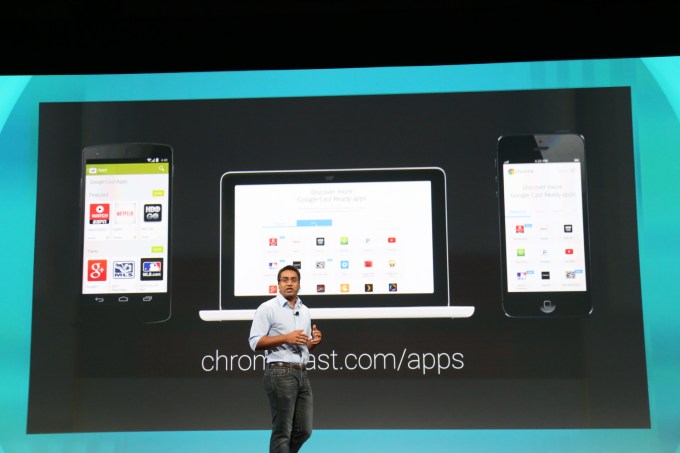 “So how do we do that?,” asks Chandra. “We’re using a variety of technologies to confirm that you’re in the same room as the Chromecast. If for some reason we can’t automatically detect that, you can enter an on-screen PIN,” he explains.

Another feature called “Backdrop” is meant to help you get more use out of your Chromecast when you’re not actively watching videos or streaming music.

With this option, you can turn your TV into a picture frame of sorts, playing slideshows of your own photos (from Google+, naturally), or other scenic landscapes, art, lifestyle photos, weather, news and more.

“Grandparents everywhere are going to love this feature,” Chandra jokes, while showing baby photos on the TV. 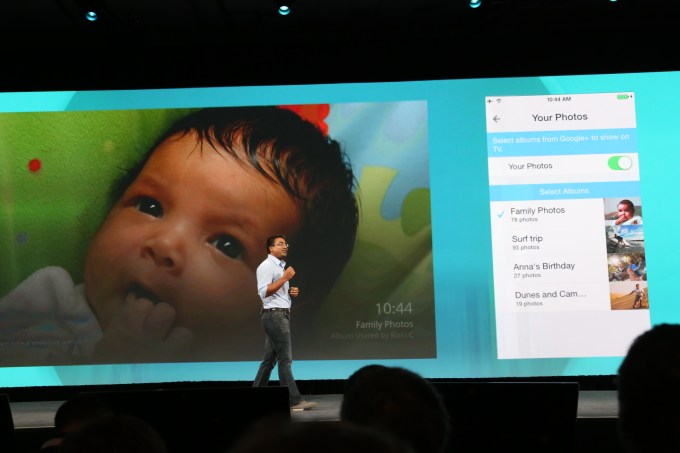 The feature is not entirely unlike the built-in photo slideshow options found today on many newer TV sets except for the fact that you can make these customizations from your device’s Chromecast app, and you can also ask your phone (by speaking into it), “What’s on my Chromecast?”

This clever trick will bring up more details about the image that’s currently on the screen, like who’s the artist behind a beautiful painting or where a landscape photo is from, for instance.

However, the standout feature in the Chromecast update is its new ability to allow any Android device to be mirrored, wirelessly, onto a TV. Google built its own framework for this, allowing it to cut down on the latency, Chandra said. 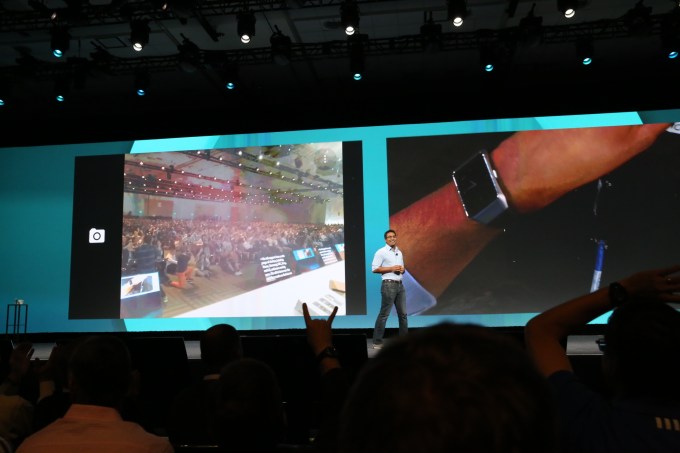 During the demo, the company showed how you can switch this feature on from the settings, making everything on your phone immediately appear on the TV, including things like Google Earth and even your phone’s camera viewfinder – the latter which was aimed at the audience for a little frivolity before wrapping up the announcement.

The new features will roll out later this summer, Google noted, but did not offer a specific date.