ClearTax is not the typical Y Combinator launch. Founded in 2011 and based in Delhi, the startup already has a strong presence in India, where it automates the income tax filing process for workers. Last year, over 300,000 people used ClearTax to file their taxes. Furthermore, the company is also the first one focused specifically on the Indian market to join Y Combinator (though the program has accepted other, more internationally-focused startups with India-based founders before).

While their market opportunity is currently in India, ClearTax decided to join Y Combinator because the startup got access to “a set of resources we don’t get in India,” says founder Archit Gupta.

“We were missing some of the mentorship in India for example. I worked in Silicon Valley before. I was an engineer at Data Domain, which was acquired by EMC. So I had seen how being in the Valley is super useful, so that whole thing made it very, very clear to us that we should come out here.”

India’s Push To Get All Tax Filings Online

ClearTax wants to expand beyond India eventually, says co-founder Archit Gupta, but right now there the country presents a fast-growing opportunity thanks to the government’s goal of making all tax filings online by 2016, which means that 42 million people will be filing their income taxes electronically in about a year. Furthermore, four million new taxpayers join the workforce every year and the projected rate of increase in the number of e-filers is 9% year over year.

“Twenty million filed online a couple years ago, 27 million last year, and I think it will be 30 to 35 million this year,” says Gupta. “For us, that’s one of the very key drivers of growth. It’s basically forced by the government saying we want everything electronic.”

E-filing in India is already six years old and there are several other companies that offer online tax services. To differentiate, ClearTax decided to look at e-filings as a “software problem,” says Gupta. They also created a simple user interface with a slightly irreverent tone to mitigate the tediousness of filing taxes.

“Before we existed, before ClearTax existed, nobody, I think, had taken a look at the tax filing product like from a software perspective,” says Gupta.

India’s version of the W2 form is called Form 16, or F-16. To use ClearTax, all someone needs to do is upload the form onto the website. Then ClearTax’s software automatically pulls out relevant data, so users don’t have to manually key in any numbers or information, and prepares tax forms for each user, a process the startup says can take as little as 15 minutes.

Gupta says ClearTax’s main competitor is the government, which has its own online filing software, but that’s complicated to use, especially since people need to figure out which one out of seven tax forms they need to fill out. ClearTax also competes with HR Block, which launched a website in India last year for tax filings, as well as startups Taxmile.com and Taxspanner.com. 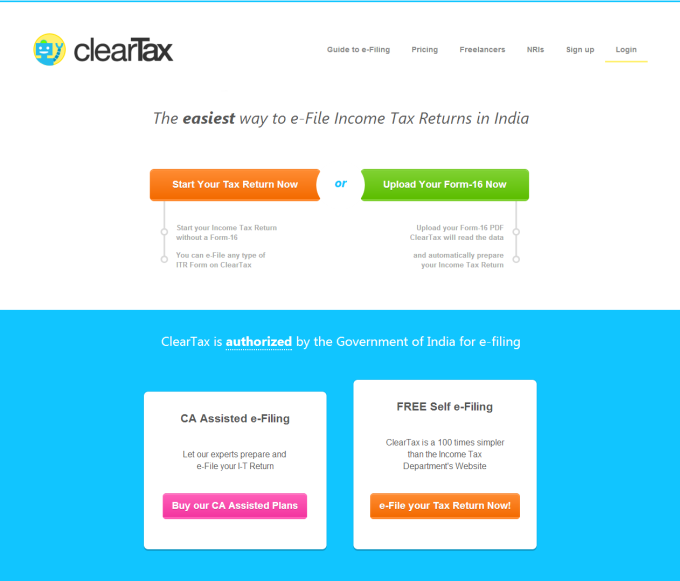 ClearTax’s competitive advantage is making the process of filing taxes easier and faster, with less steps and potential headaches for individual users, says Gupta. For example, if someone has a question about certain field in their tax form, they can leave it blank and then ask one of the 70 chartered accountants ClearTax works with for help.

How ClearTax Gets Users

While the startup’s business model is B2C, it uses a B2B model to find users by reaching out to large corporations, which then offer ClearTax for free or at a discount to their employees. These companies currently include the Royal Bank of Scotland, as well as major startups like InMobi and Flipkart.

Unless someone gets an employee discount from their company, self-filing costs between $4 to $5, while an assisted filing, in which a user gets help from a certified public accountant, costs $10 to $100 depending on the product and complexity of the tax return.

One of ClearTax’s biggest growing markets are Indian citizens living in other countries, who have a service made specifically for their needs that costs $40. Another is ClearTax’s products for businesses, which are currently targeted toward freelancers and small businesses. Most of ClearTax’s enterprise clients are freelance photographers or work in tech-oriented industries, including web design and development. ClearTax’s accountants help them claim expenses, which in turn can increase the amount of their tax return, by asking them questions with a phone call.

After 2016, when all tax filings are online if the government’s initiative goes according to plan, Gupta says ClearTax will start working on software-driven personal finance products.

“We don’t just want to get into selling off funds or investment instruments. There has to be a value addition via software, like WealthFront, the fin-tech company Adam Nash is helping to build that says it will use software to tell people how to invest and it will have a very small carry and just be mutual funds. That to me is a much more exciting model and it’s a very new way of thinking.”

In the near future, ClearTax will focus on building mobile software, including tools that will allow people to file their income taxes using only their phone. Gupta says much of ClearTax’s website traffic already comes from people browsing on their Android devices.

“Next year, we will crack the code in getting people to file on their phones because we can do optical-character recognitions. Once someone uploads a photo of their F16 or emails it to us, it’s really a very small amount of data,” says Gupta. “We see a very strong rise in Android traffic on our website and we know it’s very important for us to be there for our users in that aspect.”