Earlier this month, Facebook made some waves in the mobile world when it acquired Pryte, a platform for carriers to sell bite-sized (byte-sized), cheaper, data for specific apps or other services. Facebook’s interest was for its Internet.org push into developing markets, but it’s not the only one interested in a la carte data: a similar model is also getting rolled out in the U.S.

FreedomPop, the U.S. mobile carrier that offers users “free” mobile services (coming soon to Europe, too), is planning a Pryte-style “pay as you app” feature where users can buy data allowances for specific apps. On top of that, it’s also launching a “sponsored” service that will give people free data allowances for specific mobile apps for a period of time. The service is set to go live in Q3.

This will sit alongside FreedomPop’s basic mobile service, with gives users 500 megabytes of free 4G usage each month, either on phones they purchase via FreedomPop or bring in to use on the network.

The screenshot above shows how the service (now in test mode) currently looks, and what kinds of offerings will be on it.

For example, users can buy Facebook usage for one hour for $1, or pay $7 to get it for a whole month; or get “sponsored” access to CNN’s app for free.

From what I understand, the placement of Facebook, Twitter, Instagram and CNN is more hypothetical than actual — FreedomPop has not yet confirmed what apps will be in the mix but says there will be at least three sponsored apps at launch, as well the option to pay by the hour/month for 50 of the most popular apps.

Since the sponsored data usage is effectively a kind of mobile advertising, I wouldn’t be surprised to see gaming companies, which are strong users of mobile ads, among them.

FreedomPop will also include add-ons for its own services as part of the offering. They will include one-off purchases of unlimited voice, or “anything data” options that people can use for whatever they want.

FreedomPop’s move will give the carrier a clearer way to sell its own services — possibly a response to some of the criticism that it has faced over its lack of charging transparency, with some users accruing extra charges when they’ve unwittingly exceeded their “free” allowances.

This is partly to do with the disconnect between “bytes” and actual usage. “The biggest issue we see is a majority of users that don’t really understand how data is measured or consumed, e.g. 1 MB vs 1 GB, or what apps consume what. They burn through 500MBs on 30 mins of YouTube,” the company says. So instead it’s working out charges for data usage based on particular apps. 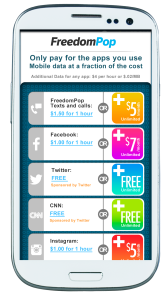 That will likely mean that data-heavy options for a YouTube app package may be charged somewhat higher than, say, monthly package for Twitter. It’s an interesting development, given the currents around net neutrality, although FreedomPop says that while it’s a supporter of net neutrality, this is less about that “and more about an alternative model to our current ‘freemium’ model to try and make access free.”

It’s also interesting for a couple of other reasons.

For one, it points to how mobile data is evolving as we move from early and mid-stage adopters to more ubiquitous use of smartphones.

Those who have shied away from spending hundreds of dollars every month on mobile phone plans could be more likely to buy into mobile data use if it’s offered in smaller segments and cheaper prices — or so the thinking goes. This trend’s also being played out in devices themselves, with handset makers moving to offer low-cost smartphones targeting the same users.

“Currently, wireless access is a commodity that users pay a large premium for. However we see no reason why the access model can’t look more like TV or the internet where advertisers essentially subsidize the “basic” content creation (e.g. NBC or TC) and users only pay for premium (e.g. HBO or WSJ.com),” the company tells me.

All the same, it’s not guaranteed that a la carte will be to everyone’s taste.

“From a user perspective, we will need to see if demand is significant enough to deliver real traction,” the company says. “But, if you step back, a menu model is actually a more intuitive way to consume mobile data for a large segment of the population. It gives more control to the user and delivers more savings for a large segment of users who do most of their data consumption on a small segment of apps. Ultimately, it should allow an average user the ability to spend $10-$20 per month all in and fluctuate that up/down with actual consumption.”

Although a la carte offerings may bring in lower average revenues per user, at least it gets those later adopters spending a little, with he hopes that it will eventually lead to more over time. It’s a trend that is also being applied in other areas like streaming video, where some providers (like Wuaki in Europe) are playing around with how to charge for individual films and TV shows.

The other interesting point is that this is another step in how mobile advertising is changing.

It doesn’t necessarily mean that invasive display ads on your mobile screen will be disappearing, but app sponsorship becomes another part of the ad inventory on offer. ESPN might sponsor an ESPN feed, but in theory LG or Samsung could sponsor it, too.

The idea will be to offer this in a programmatic way to advertisers: letting them sponsor data use of an app on a particular day (e.g. Monday nights), for a particular demographic (e.g. 21-34 year-olds), or in a particular region (e.g. in L.A.). “We are investing a lot to build out the capability for any app developer or company to sponsor data with pricing determined by an apps’ ‘proximate data consumption,'” a source at the company says.

FreedomPop is also going to offer “blitzes” of free app usage, which will tie sponsored data usage into SMS ads as well. For example, if, during the World Cup, ESPN or another brand wants to sponsor ESPN’s app for the duration of a game, FreedomPop would send out paid SMS to users that says something like “Use of ESPN is free for the next two hours and your data plan will not be charged.”

It’s also planning to make its first move outside the U.S., and it will announce its first carrier partner in Europe in the next two months.