Facebook appears to be a suffering a major international outage this morning, with the site unavailable in multiple regions around the world, including on web and mobile, and Facebook social plug-ins on other websites also acting up.

The Facebook.com site is unavailable here in the UK and in other European locations including France and Belgium.

It also appears to be offline in parts of Asia, including India, and Africa. US Twitter users are tweeting about the site being down for them as well.

We’re reached out to Facebook to ask for details on what’s taken the site offline and will update this post with any response. Facebook has now sent a statement confirming the outage.

Update: After a brief — but widespread — outage this morning Facebook appears to be back up. Or it is in some regions, including the UK.

Facebook users suffering social networking withdrawal can breathe a sign of relief and get back to liking their friends’ baby photos now.

It’s never great for a major site to suffer a major outage — but Facebook can take comfort from the global outcry caused by a few minutes of downtime.

Facebook may not be as cool as it used to be, but plenty of people still miss it when it’s (momentarily) gone. 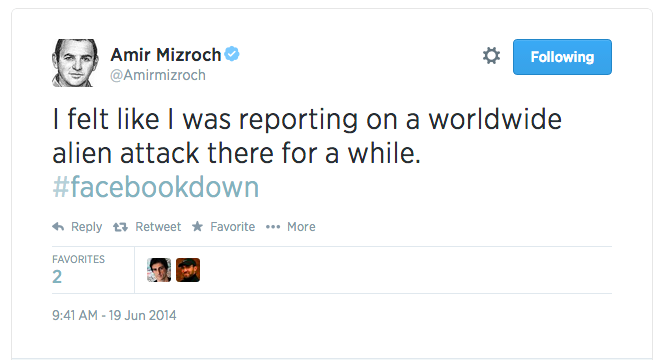 Update 2: Facebook has now emailed a statement to TechCrunch confirming it had “an issue” that took the site offline — without going into any detail about the cause. And confirming the site is now “100%” back online.

A spokesperson for the site said: “Earlier this morning, we experienced an issue that prevented people from posting to Facebook for a brief period of time. We resolved the issue quickly, and we are now back to 100%. We’re sorry for any inconvenience this may have caused.”

Judging by tips from users reporting the site was down for them, Facebook’s total downtime this morning looks to have stretched to around half an hour.

The social network suffered another short outage earlier this year, back in May.

Update 3: Facebook has sent us a second statement, going into slightly more detail about the issue. The statement follows below in full.

Late last night, we ran into an issue while updating the configuration of one of our software systems. Not long after we made the change, some people started to have trouble accessing Facebook. We quickly spotted and fixed the problem, and in less than 30 minutes Facebook was back to 100% for everyone. This doesn’t happen often, but when it does we make sure we learn from the experience so we can make Facebook that much more reliable. Nothing is more important to us than making sure Facebook is there when people need it, and we apologize to anyone who may have had trouble connecting last night.