The problem Latvian startup Helico Aerospace Industries has set out to solve is most homemade action sports videos rely on a camera, such as the GoPro, being strapped on your person or action sports equipment, providing mostly a POV shot only. But, with drone technology, it could be possible to democratise the kind of aerial videos previously the domain of expensive, professional shoots only. 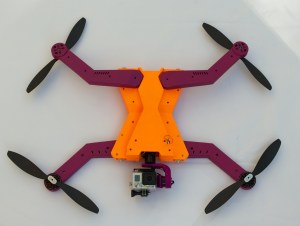 “Till now it was possible to put a camera on your helmet, chest or hold in your hands to get a close up of yourself in action,” says Helico founder Edgars Rozentals. “GoPro revolutionised the way we shoot video in action sports. But in these POV type videos you cannot show how big that kicker or wave really was or how epic that nature view was in the background. You needed someone else to shoot you from aside. To get aerial footage is even more challenging and expensive; you had to hire a professional photographer with RC piloting skills.”

Of course, strapping something like a GoPro camera to a remote-controlled helicopter or drone isn’t a new idea. But where AirDog is attempting to be that bit special is it claims to be fully autonomous, requiring you to simply wear a wrist-strapped controller called AirLeash that the AirDog will follow. It can take off and land automatically, and whilst following the action, uses gyro stabilisation technology to ensure the subject is always in frame. Now, to be transparent, I haven’t had a chance to try out the device, or seen a live demo, but, on paper at least, it’s hard not to be impressed. 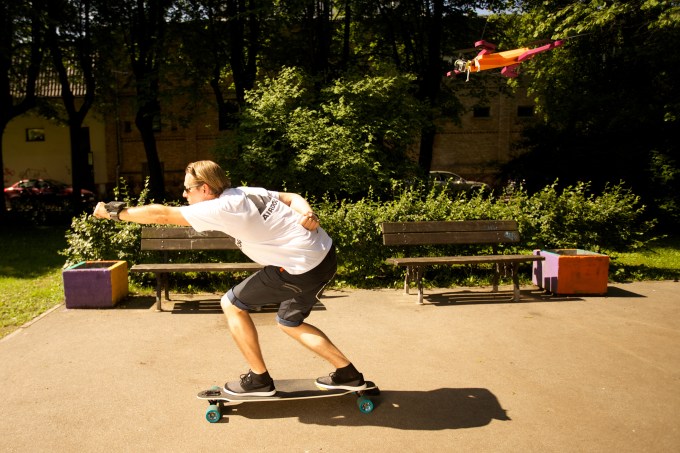 “You can take it everywhere. Fold it down, put in your back pack and go wherever you want. Then turn it on, put on the ground, strap the tracker on wrist or helmet and with push of a button it will take off and start following you in desired altitude and angle,” explains Rozentals. “We are putting technology that used to be available only for pros and rich into hands of every sports enthusiast.”

GoPro, of course, has created a pretty big market for action sports video, and Ķipurs is hoping Helico can ride that wave.

“Last year 4 million people bought the best inspiration memoriser, a GoPro Hero camera, this year will be another 7 million. We believe that the market for such a camera accessory as AirDog is huge,” he adds.

That said, the AirDog drone isn’t going to be particularly cheap, starting at $995 for the first 100 early bird Kickstarter backers.

A few other specs: The drone weighs 3.9 pounds (1.7 kg). It uses long-range Bluetooth to do the tracking, and has a speed of up to 40 mph. Flight time is said to be 10-15 minutes, depending on particular application, flight speed, temperature and altitude above sea level, and is operable in winds up to 23 knots. The device also has preset flight modes to ensure a good experience in a wide variety of action sports including BMX, snowboarding, surfing, motocross, wakeboarding etc., and is programmable via a smartphone app.

In terms of competition, Rozentals cites manufacturers of toy helicopters, such as Parrot with its AR Drone. There are also companies that focus on the so-called DIY enthusiast market for people who are passionate about flying drones and building them.

“We are targeting a completely different vertical,” he says. “We designed AirDog for those not really caring about the technology itself. We made it for those passionate about their favorite sports and being able to capture their activity as never before.”

(Update: You wait all year for an autonomous aerial camera drone to arrive and two turn up at once. Launched on Kickstarter last night is the Hexo+, which has already reached its crowdfunding target.)