True&Co, the e-commerce startup that aims to bring us the perfect fitting bra, took data from a million boobs to build its own line of intimates — in an effort to truly support your bust.

The company, which formally launched back in 2012 and received an extra chunk of funding just this last year, upped the ante this week with the promise to personalize the perfect fit with the introduction of its Uniform line of comfortable intimates. 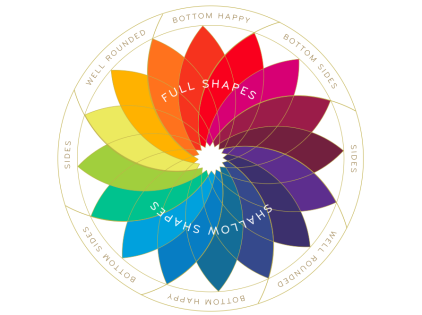 Using 7 million different data points and gathering information from 500,000+ women for the last two years, the company has identified over 6,000 different types of boobs. Its data scientists then arranged all those different shapes, sizes and angles on a color-coded system they call True Spectrum.

Think of it like a color wheel you’d find in a paint store, but for all the various boob types.

This solves a major problem for many women with more unique bust sizes. Women with smaller rib cages but fuller curves at the top of the boob have to work to not have a cup that “runneth over”. Ladies with a more shallow chest but larger cage often find fits that are too tight and underwires which scratch and make wearing a bra painful. This is especially useful for those with full breast curvature but a smaller rib cage — a seemingly impossible type to get the perfect fit. Women with a 32 measurement and below, but D cup and above with a more full curvature complain the most about strap digs, side spills and the “muffin tits” effect.

True&Co has already worked on perfecting a suggested fit, but with this kind of weigh-in from this many women, it proves the complexity of a woman’s bust and helps those on the margins get the literal support they need — and have complained about for since the beginning of the brassiere.

“You would not believe the amount of data our system has to deal with in real time. It knocks us on our butt sometimes,” says CEO Michelle Lam.

She says the data algorithm is the key to the future of not just bra shopping, but the way women will shop in general. The biggest mistake retailers make, according to Lam, is not trusting customers to know their own body. The True&Co True Spectrum relies on an algorithm that is based on customer feedback about the unique shape of their own body.

True&Co isn’t the only ones asking questions and making assumptions on bra type, though. Victoria’s Secret started asking customers for data to help them find their perfect fit just a couple months ago. The quiz on their site is strikingly similar to the one True&Co had already created. Herroom and others have also jumped on the trend to tap into personalization in the estimated $12 billion lingerie industry.

There are 8 different color categories a woman can be assigned to in the True Spectrum, based on size, shape, fit and especially curvature. Celeb Rachel Ray’s boobs, for instance, are shallow and round and thus would be considered Violet. Citrine, the more full and round type of boobage is the most common, with 28% of women falling into this category.

Curvature is the most important component of the boob, and the one retailers, until now, have left out, according to Lam. “We were the first to start looking into how this affects fit. Now every retailer talks about it.” She says this plays an important role in how True&Co suggests different bras on their site, even for two different women with the same size.

Some women have more of a pokey sternum, which means a wire band can hit it and cause a lot of pain. The data showed this to be a top complaint among many women. It doesn’t matter the size here, if your boobs have a more shallow bottom curvature, you are considered an Azure and will be more comfortable in a plunge bra, for example.

Uniform is not True&Co’s first foray into building a bra line. It took all that fresh funding and tested out previously collected data with a smaller collection that actually ended up accounting for over a quarter of their revenue last year.  According to Lam, more data points from hundreds of thousands of women helped the company realize it needed a much bigger line to account for the 6000+ body types that it currently knows of out there.

“You need a bra that makes you feel like a million bucks and we’ve worked really hard to build this data and infrastructure to personalize this brand,” Lam mentions right after a deep discussion on the emotional investment women make into their bra.

The algorithm isn’t perfect though. Lam disclosed True&Co is currently satisfying 8 out of 10 women with just the self-reported data. But the company doesn’t have a good bra for the “Mulberry” type, which suits “women with full sides” and accounts for 3% of the population, admits Lam. In other words, women with smaller curvature but who still bust out of the side of their bra still don’t have much of an option here.

She believes that as the company gets more data from more hundreds of thousands of women who take the quiz, True&Co will discover even more body types and be able to help either create a bra just for them or suggest the right type of bra already on the site to truly support many more unique boobs.

“This is just the beginning of the future of shopping,” says Lam, “and True&Co has only just scratched the surface on its goal to deliver on the perfect fit,” she insists.

It has started adding in items beyond just the bra — including panties and lingerie and the company could see a future in other types of clothing.

But Lam says satisfying women with the perfect bra is her aim for now. And it’s definitely the toughest. “Retailers have made all these customized clothes for men, but women will be their biggest customers in the future of online shopping because of our curves. We are 3D.”