Facebook has been promising that it would “shatter itself into pieces” in order to better compete on mobile by breaking up the main Facebook app into mini-apps focused on specific features. Today, it’s making good on these previously stated intentions with a new photo and video-sharing app called Slingshot, now available in select markets. [See update below: Facebook is pulling the app.]

The app is designed to allow friends to share photos and videos of what they’re currently up to, by “slinging” that content to others on the service. However, unlike, say, competitor Snapchat, friends can’t see your shot until they, in turn, sling something back.

That feature, though a bit gimmicky, seems specifically designed to increase the viral effects and spread of Slingshot. By tapping into users’ natural curiosity, they may be motivated to share with a friend in order to “unlock” the new shots they receive. 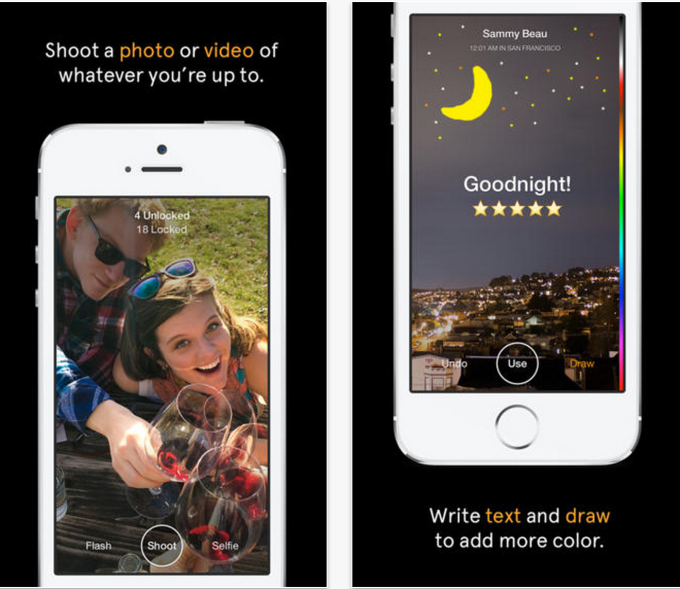 Like competitor Snapchat, you can annotate the images with your own captions and drawings, according to Slingshot’s App Store description. However, it seems that the app may differ somewhat when it comes to the “ephemerality” of these shares. While the app promises that you can view your unlocked shots later if you’re busy, once they’re swiped away, they’re gone for good.

The new Slingshot app closely resembles another new release called Taptalk, which was rumored to be a favorite among Facebook engineers who were actively working to clone the experience, according to reports. Slingshot also mimics the “slinging” concept popularized by an app called Rando, which met its untimely death this March. And, of course, Facebook earlier had infamously tried to clone Snapchat more directly with Poke, an app that flopped heavily and was recently pulled from the App Store.

Currently, the new Slingshot app is available in select markets only, as this appears to be either a test or staged rollout. (We’ve reached out to Facebook to confirm.) Slingshot was not, at time of publication, available in the U.S. market, so we’ve been unable to test how exactly the app works at this time, but we’ll offer a longer review when available.

In the meantime, select markets (see list below) can download the app here on iTunes. There doesn’t appear to be an Android version at this time.

Update: Verge is reporting the app is no longer available, though we’re still seeing it appear in select markets as of 4:40 PM ET. The app never became available in the U.S. store, but now you have to change stores inside iTunes to see it at all, as the App Store page is down. That could indicate Facebook is pulling the app back, as it turns out – for example, even when you’re in the Malaysian store, if you click to download the app, you get an error. Facebook has not provided comment.

Update 2: A Facebook spokesperson has now told us “earlier today, we accidentally released a version of Slingshot, a new app we’re working on. With Slingshot, you’ll be able to share everyday moments with lots of people at once. It’ll be ready soon and we’re excited for you to try it out.”