At its WWDC conference this week, Apple unveiled a scaffolding of sorts that allows developers to control smart home devices like light switches, thermostats, garage doors and more. This is called HomeKit, and it promises to be flexible and powerful — but its success will lie in hardware adoption.

How Does HomeKit Work?

HomeKit is, at its heart, a spiritual companion to Apple’s Bluetooth direct and multi-peer frameworks. It allows a developer to use a simple set of controls to toggle the states of devices or send commands to them.

Unfortunately, all of this is dependent upon those devices being part of the Made For iPhone (MFI) program, which requires a specific wireless chip and software package to be integrated into the devices. That’s not too outlandish, and Apple’s requirements for the MFI program have gotten much lighter over the years. But it does preclude an indie developer firing up a HomeKit-compatible app and an off-the-shelf Arduino controller to roll their own home automation.

HomeKit, therefore, is a facilitator for the home automation industry, and not a “hacker kit.”

HomeKit provides a way for every enabled app and accessory to access a single repository of information about your home’s smart devices with permission. This means that any new HomeKit-enabled app you install can instantly see all of the rooms, devices and homes you’ve defined before. 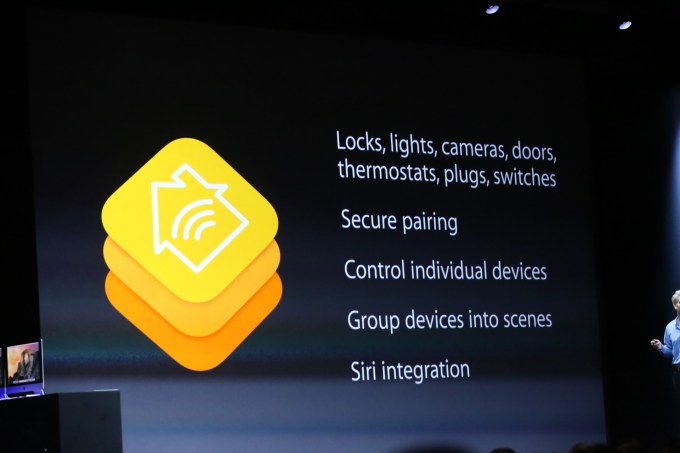 Adding smart devices to your home, then, is not like starting over every time. You just buy a new thing, plug it in and add it to your already existing suite.

Siri is considered a primary system interface of HomeKit, though individual apps will no doubt continue to have their individual controls. So “turn on the lights in the back bedroom” will be a recognizable Siri command as long as you’ve installed and defined that accessory and room. Names of devices, accessories and homes, as well as the actions they can take are all recognized by Siri.

A set of initial devices like door locks, garage doors and lights are defined in the HomeKit framework, but developers can specify an infinite amount of new ones.

Apple is positioning HomeKit as an “open” system that allows for creation and definition of any device or automation interaction that you can think of. The internal system is actually very flexible, and doesn’t put a whole lot of restrictions on creating devices, scripting actions for those devices to take or anything else. But the open aspects of HomeKit do not extend to devices that are not MFI-compatible.

End-to-end encryption is enabled for HomeKit accessories and to maintain what Apple calls “complete” privacy and strong security. HomeKit APIs can only be used when an app is active or open in the foreground; there is no such thing (currently) as an app using HomeKit that works in the background without user interaction.

You can, however, script actions to take place under a set of given conditions, including ones that happen when the apps aren’t open. But those will have to be explicitly chosen by the user: “open the garage door when I get home,” “turn on the lights at 8pm on Tuesdays,” etc.

And Apple’s iOS system handles those instructions, not the individual app. This makes it much harder for a malicious app to perform an unwanted action without your consent.

Apple’s system also allows for “zones” that group rooms together in recognizable ways like “upstairs” or “downstairs.” And you can group services, too, letting you “turn on all of the lights.”

Until the MFI products become available, developers will be able to “pretend” they’re controlling devices with a program provided by Apple that simulates hardware devices like lightbulbs or garage doors or what have you.

That’s not to say that customers will have to re-buy all of their smart home equipment for it to be controlled by HomeKit-compatible apps. Apple has created a provision for a piece of “bridge” hardware that will translate the languages that current devices use to accept commands over to the new language Apple is using. 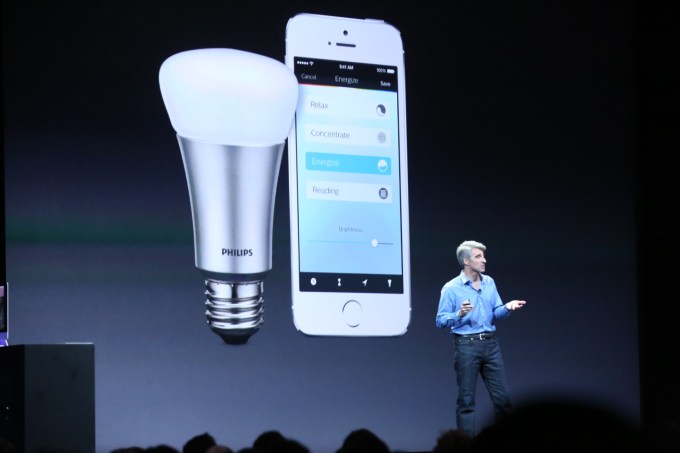 A bridge will give your iPhone the ability to control your home equipment using HomeKit even if they can’t connect directly to those devices.

There’s no word on what shape those bridges might take, but I’d imagine that one of Apple’s hardware partners will likely create a “hub” of sorts that you can install in your home to link everything together.

Several current protocols are duking it out for supremacy in home automation. Among those are ZigBee, Z-Wave and Insteon. In the past, Apple might have positioned itself as an absolute authority and refused to even acknowledge that these other protocols exist.

The fact that HomeKit not only acknowledges that the smart home might have components that are not part of the MFI program is yet another signal that Apple is playing more nicely with others and considering ways to open up its system in strategic ways. iCloud Drive’s exposure of the file system and the ability to install third-party keyboards are other signs of this philosophical change.

It’s a welcome change, and one that could help Apple gain a foothold in the automation industry — and give partners the chance to sell an additional piece of hardware.

What we’re seeing here is the development of an ecosystem. By providing both an App Store and a standardized framework for developers, Apple is offering hardware manufacturers the services of its hundreds of thousands of developers.

Sure, individual hardware manufacturers can integrate HomeKit into their own apps, but independent developers that would never have gone into hardware manufacturing or signed up for the MFI program will now be able to build standardized solutions for people looking to control their homes.

Imagine, for instance, a home automation suite built by the creators of beloved apps like Tweetbot, Fantastical or 1Password that integrates with all of your separate pieces of smart home equipment. That’s possible with HomeKit.

Only, however, if Apple is successful in getting hardware partners to adopt the MFI program and make their devices HomeKit-friendly. This means that Apple’s hardware evangelism team (yes, it has one) will have to kick into high gear over the next few months to get suppliers on board with the new system in time to have products on the shelves when iOS 8 ships, or soon after.

There have already been some indications that we’ll see strong launch partners, as there was a slide shown with a handful of brands during the Apple keynote at WWDC. Notably, Nest was missing from that list — whether that was because of its recent troubles with a software recall or because it’s now owned by Google is anyone’s guess. But there’s nothing stopping Nest from complying with the MFI requirements and enabling HomeKit. Nothing but Google, of course, so we’ll see how that goes.

One thing I would encourage Apple’s MFI team to consider carefully would be to allow side-by-side adoption of standards in potential devices. Rather than two smart door locks side-by-side on the shelf — one with a ZigBee logo and the other with an MFI logo — this would allow manufacturers to concentrate their efforts on one SKU and eliminate confusion for buyers.

HomeKit does not offer a truly open system that allows communication directly with any connected device, regardless of MFI status. But the hub concept is encouraging. It displays a new, more flexible way of thinking that is pervasive throughout the company’s announcements this week.