Canadian digital design agency smashLAB is having a go at building a new topic-based chat platform which emulates some of the functionality of IRC but makes it more accessible to mainstream users, with a simple, minimalist browser-based interface.

It’s calling this effort Chapp, a portmanteau of chat and app.

If you’re as old as me you’ll remember using IRC — aka Internet Relay Chat — way back in the day. I won’t say exactly how long ago, but long before Facebook was even a twinkle in Mark Zuckerberg’s eye. (Zuckerberg, lest we forget, was born in 1984. While Facebook was born in 2004.)

IRC is still going, of course. But it remains more of a sub-cultural underground than ever, given the mainstream rise of social networking outlets for people to connect with others.

In contrast to the simplicity of Facebook, WhatsApp, Twitter et al, IRC has also always been a bit of a faff to use. Something that attracts and appeals to the technically minded, hence the proliferation of IRC channels on techie topics such as bitcoin. You can use IRC in a browser but you need a client to do that. Chapp strips away that layer of friction and offers a pared back interface for real-time text-based chatting within the browser (on desktop or on mobile).

Chapp is about bridging the gap between specialist forums and the social main road of Facebook.

“Topic-based discussions serve a purpose, but, no one’s really made that format viable to broader audiences,” argues smashLAB’s Eric Karjaluoto. “I just want a better place to have in-depth conversations with people who are as interested in a topic as I am. For example, I want to talk about typography with type nerds, and then discuss running with others who love the sport.

“When I have such conversations on Facebook, I worry about alienating my other friends — who find those topics tedious. I believe topic-based discussions are just waiting to happen, and if Chapp can facilitate that, all the better!”

There is certainly some crossover with discussion forums like Reddit, but again Chapp is aiming to be more appealing and accessible to more of a mainstream user by keeping things simple and presented within a very clean interface. It remains to be seen if it can preserve that minimalism once/if large numbers of users wade in, however.

Chapp currently looks especially elegant thanks to the lack of ads muddling up the purity of its colour scheme, allowing hashtagged topics to speak for themselves.

Karjaluoto concedes that Chapp is still very much an experiment. smashLAB is bootstrapping the build and the effort is mostly an exploration to see where it goes, and whether in fact there is a gap in the chat app space or not.

“We haven’t entirely figured out what Chapp is, yet. It started as an updated take on IRC, but many users say it feels more like a forum. As we add in more personal messaging options, I think it will take on more chat like characteristics,” he says. 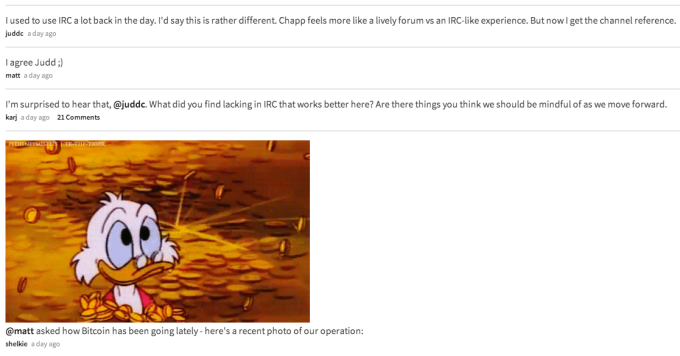 At present, Chapp supports text-based chat within an existing hashtagged topic, or creating your own public or private chatroom. There’s also support for photos and animated GIFs. And threaded conversations for direct @-replies.

“I think there are use cases for Chapp that are interesting. For example, @shelkie’s son is in a weekly mountain biking camp. There are a dozen or so kids in the group, so a private channel on Chapp is much more practical than email or text when arranging ride locations and times; or, my wife could use it to interact with the other members of the boards she sits on. Currently they send (lots of) emails and text messages,” adds Karjaluoto.

Another reason for smashLAB to build Chapp is to gain experience in real-time web technologies — an area it believes is set for strong growth.

“We think real-time is going to become much more prevalent on the web, and we wanted to gain experience in this area,” he says. “Chapp is built on Node.js and Meteor; both relatively new technologies (Meteor should be hitting v1.0 soon). This was a risky decision for us, given Meteor’s state of flux over the past year, but it’s been a win so far, allowing us to rapidly launch a product and start gathering feedback.

“Scaling could be the next hurdle though, as there are few concrete examples of services that support a large number of concurrent users on this platform.”

In terms of business model, that’s not yet a focus at this early stage while Karjaluoto and co see where Chapp takes them, but he says they have contemplated running it “almost like a co-op” and charging users a small monthly fee for voting rights on how it evolves — as a way to keep it ad-free.

Another monetizing option on the table is offering pro-accounts with additional features. “For now, though, our focus is solely on making something that people find good/useful,” he adds.