Apple announced a significant overhaul to the iTunes App Store on iOS this morning at WWDC in response to the challenges developers have faced as the store became increasingly crowded over the years. Today, there are 1.2 million iOS applications, meaning that the traditional means of finding “what’s hot” like the App Store’s Top Charts or Editor’s Picks, for example, are no longer enough. To address this problem, Apple is giving App Store search a serious makeover, with new features like “trending applications,” continuous scrolling, App Bundles, video previews and more.

“I do read your emails,” said Apple CEO Tim Cook with a chuckle, when detailing the App Store update.

In the iOS 8 App Store, which comes as a part of the forthcoming new version of Apple’s mobile operating system, users will have a new “Explore” tab that lets them delve deeper into the App Store’s offerings, including by category and subcategory.

Also new is a continuous scroll, which is more of a performance improvement related to moving through the App Store search results, which was not always the fastest way to navigate through a set of applications.

Developers will also be able to create “App Bundles,” which help them better market and sell groupings of their applications to App Store shoppers. This would be helpful to those developers who specialize in certain types of applications, like a suite of apps for photo editing, for example.

Consumers will now have the option to buy these apps in bundles, which could potentially increase developers’ App Store sales.

A prominent children’s app developer, Toca Boca, was shown as an example of the App Store bundle with a grouping of apps called “Toca Toy Box,” which allows users to download a whole set of apps from the developer at a discount, when compared with buying the applications one-by-one. 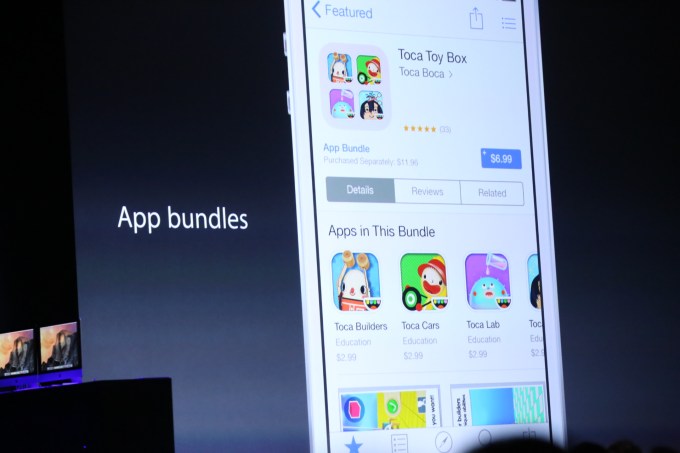 Meanwhile, a feature for video previews of apps – something that, we should point out, arrived on Android first – allows consumers to view the app in action before they make the decision to purchase. These short App Store videos are perfect for tweeting or sharing on Vine, and help to give a better idea about how an app looks and feels versus a screenshot, which can be misleading.

When played, the videos fill the screen, giving users an experience that’s as close as possible to what it’s like to use the actual application, without having to download it.

For developers who take the time to craft high-quality apps with elegant transitions and animations, videos will also help them better showcase those efforts. And for gamers, video previews will let them get a taste the gameplay before committing to a download.

Another feature involving related search suggestions that prompt you with other possible searches to try, also got a brief mention during the keynote, but this had already launched earlier this year.

And top apps that Apple likes will now get an Editor’s Choice logo to help with app recommendations. 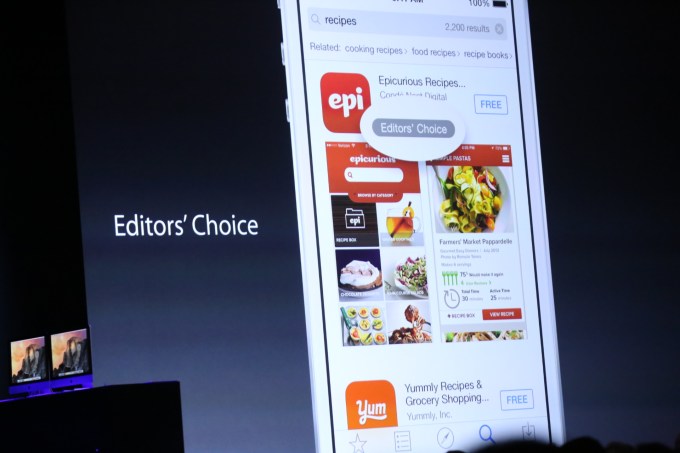 A handy feature for multi-iOS device families is the new “family sharing” option, which will allow users to buy apps one time then share with others. This feature extends to other media as well, including photos, videos, calendars and reminders. Users will need to have the same payment card details on file for this to work, however, so no – you can’t “family share” with a just a bunch of friends.

The Family Share feature also lets parents approve children’s app purchases, which is a great addition that saves the grown-ups from constantly having to type in their App Store password. The feature will alert the parent via an approval notification, which is handy.

The “Trending Searches” section in the App Store is very interesting, and possibly one of the more important features of the new release, as it gives developers another way to get their apps found.

You can think of this section as something like Twitter’s trends, as it will give a look at what’s currently hot on the App Store, without the reliance on App Store chart rankings, which have been repeatedly gamed by unsavory developers who know how to hack the algorithm. Apple didn’t clarify how ‘trending searches’ works, or how real-time it is, but it does appear that this, along with the other “Explore” features will replace the “Apps Near Me” section which debuted in iOS 7, and nearly really gained mainstream adoption as a way to find new apps, due to its limited use cases. 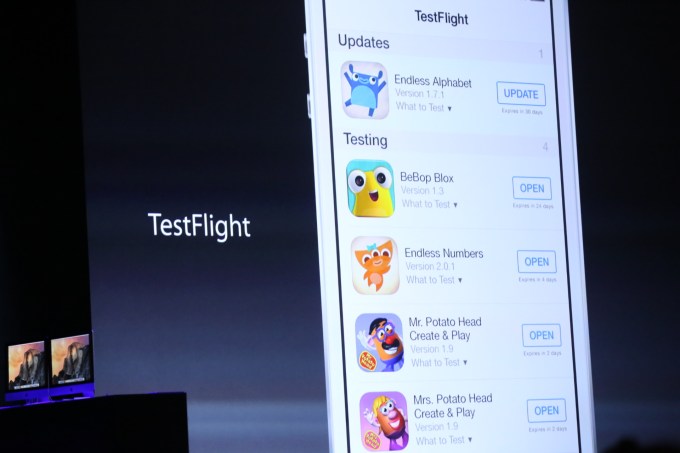 Not entirely unexpected was the announcement that recent Apple acquisition TestFlight, an app beta testing service, would now be integrated into the the developer center, giving developers native (and public!) app beta testing. You can read more about that change here.

Related to the App Store changes, developers are also getting a new software development kit, with 4,000 new APIs to hook into. As a part of this change, developers can now build their own widgets for the Notification Center, but not the homescreen.

This story is developing…refresh for updates.