Not too long ago, the idea of a commercially-built craft that could carry people back and forth into space was but a sci-fi pipedream.

Tonight, SpaceX revealed a spacecraft built to do just that.

Called the Dragon V2, the craft is built to carry up to 7 passengers (or fewer passengers, with cargo) into orbit and up to the International Space Station. According to SpaceX co-founder Elon Musk, it’ll be able to return and “land anywhere on earth with the accuracy of a helicopter“.

“The reason that this is really important,” said Musk, “is that it allows rapid reusability of the spacecraft. You just refill the propellant, and go again… Imagine if aircrafts were thrown away after each flight; no one could afford to fly.””

SpaceX had previously shown Dragon V1, a smaller, unmanned version of this craft meant primarily for testing and, in a few cases, sending cargo back and forth to the International Space Station. Dragon V2 also has an improved heat shield, allowing it to better protect passengers on their return flight through the atmosphere.

The biggest single change to the design, though, is in the engines: where each of Dragon V1’s engines (the “Draco” engine) could produce about 100 pounds of thrust, each of the Dragon V2’s engines (the aptly dubbed “Super Draco” engines) can produce about 16,000 pounds of thrust. The particularly cool part? SpaceX says they’re actually 3d printing the engines out of a specialized metal alloy (called inconel), as opposed to more traditional manufacturing methods like milling. 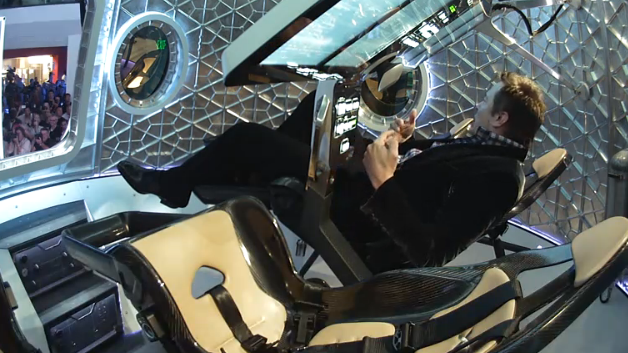 Beyond the awesomeness inherent to being able to say we now have a business getting ready to send people to space, it’s worth noting that this is the first US-built manned spacecraft in decades — and there’s more at play there than just matters of pride.

When our spacecraft are supplied largely by other countries — as they currently are, as the US uses Russia’s Soyuz spacecrafts almost exclusively — the US’ ability to reach the stars (or, for that matter, our astronauts on the ISS) lays in the whims of other countries, as well.

This became immediately clear at the end of last month, when Russian Deputy Prime Minister Dmitry Rogozin responded to US sanctions against Russia by suggesting that we could use “trampolines” next time we wanted to reach the ISS.

Within hours, Elon Musk publicly pledged to reveal a manned spacecraft by the end of the next month:

Cover drops on May 29. Actual flight design hardware of crew Dragon, not a mockup.

NASA and SpaceX hope that the spacecraft should be ready for flight by 2017.

You can find a replay of the (surprisingly short!) announcement right over here.