Here’s another project with the worthy ultimate aim of repurposing household plastic waste as useful 3D filament for making new stuff with your home 3D printer.

The Strooder — currently in prototype form as it raises crowdfunds on Kickstarter — follows in the footsteps of the Filabot we wrote about in early 2013.

Both the Strooder and the Filabot are screw feed mechanism plastic repurposing machines designed to gobble plastic pellets and spit them back out as filament for use in a 3D printer. But the Filabot’s rather hefty price-tag has been squeezed to something a lot more affordable by Strooder.

So, while the Filabot costs between $900 and $750 today, Strooder is being offered to Kickstarter backers for around $335. Some very early backers were even lucky enough to snap one up for just $250. Albeit, they’re buying the promise of a finished product at this point, based on the current Kickstarter prototype (finished product is due to ship to backers starting from this September).

Strooder has already passed its Kickstarter funding goal, though, raising £20,000 in less than 11 hours on the site. So it’s on the way from prototype to production. And there are still 29 days left of the funding campaign to run.

While Strooder’s makers, a U.K. startup called OmniDynamics, are focusing initially on selling plastic pellets so people can make their own filament using the extruder, they point out that failed prints and wasted filament can also be fed back into the Strooder to be remade as new filament provided it is cut up into small enough bits.

To facilitate plastic recycling, they say they hope to produce a grinder to make it easier to chop up and repurpose old bits of plastic as new filament. And that’s really the holy grail of 3D printing: DIY manufacturing that can turn household plastic waste into useful new stuff, without that waste needing to leave your home to be carted off to a gigantic recycling plant.

In the meanwhile, while they work on making plastic recycling via Strooder easier, they point out that buying plastic pellets to feed into Strooder is a lot cheaper (circa 5x) than buying actual 3D printing filament — making the machine useful from a money-saving point of view.

Another area of focus for Strooder’s makers is the ability to produce different filament colours by mixing different ratios of pellets. If they raise enough on Kickstarter they note they may add a web interface allowing pellet buyers to select the particular colour blend of filament they’re after and then be pointed to the particular pellets they need to buy to achieve it.

The Strooder can extrude ABS and PLA plastic, with the team aiming to expand the range of the plastics capable of being processed in future (with additional possibilities including PP, PET, HDPE, HIPS, PE). There are currently three different nozzle sizes to produce the right gauge filament for different 3D printers.

The Strooder also includes a small colour touchscreen display to improve ease of use — hence the team’s talk of the device being “consumer orientated”.

Backers of the Strooder can expect their machine to ship in September or October, assuming there are no delays.

On the filament quality point, which can be a problem with DIY filament, Strooder’s makers claim they have been able to produce “bubble free filament” and to have used it to produce 3D printed items “without problems”, including the below calibration cube: 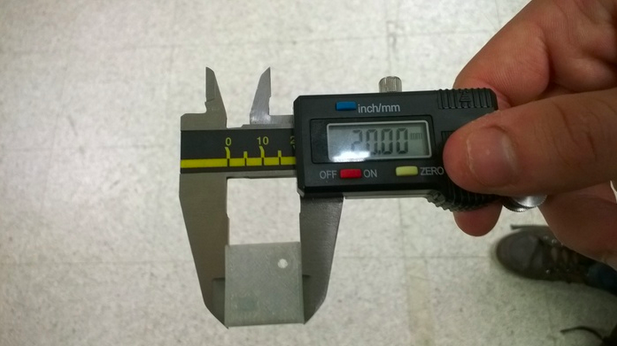