Facebook has already had its $19 billion acquisition of messaging service WhatsApp approved by the Federal Trade Commission in the U.S., but in order to make sure that national regulators in European countries do not cause any hiccups, the social network has taken an interesting step. It has itself asked regulators at the federal level, at the European Commission, to review the deal.

The move was first reported today in the Wall Street Journal, and TechCrunch has now confirmed with sources close to Facebook that it did indeed make its own move to seek a review.

What exactly is going on?

Basically, Facebook is no stranger in Europe to negative stories, consumer outcries and regulatory investigations into how it handles privacy. Over the years, that has seen the company curtail plans for how it plans to use facial recognition, for example, and has seen it have to defend itself against how it decides to run its business (sometimes winning).

In just about all of those cases Facebook has been on the defensive, and therefore in a weaker position. So this time it looks like it is trying to get out on top of the situation, pre-empting any potential enquiries by offering itself up willingly for any questions. It’s almost the antitrust equivalent of a politician in a parliament calling for an election before one is forced on him or her.

If Facebook is able to get approval at the EC level from the office of Joachin Almunia, the competition commissioner, then this could supercede any other local decisions, or at least make them more difficult to pursue.

Who is calling the shots here?

The WSJ reports that a number of parties might use the WhatsApp purchase as a route to weigh in on Facebook. They include carriers — whose SMS revenues have been hit hard by the rise of messaging apps that bypass the SMS channel; and regulators who would scrutinise the deal on the basis of local market share for Facebook/WhatsApp compared to other providers of similar services.

There could even be local startups who might want to voice opposition. The decline of local social networks in the face of Facebook and WhatsApp growth has been pretty stark, as you can see in this graphic (via Quartz): 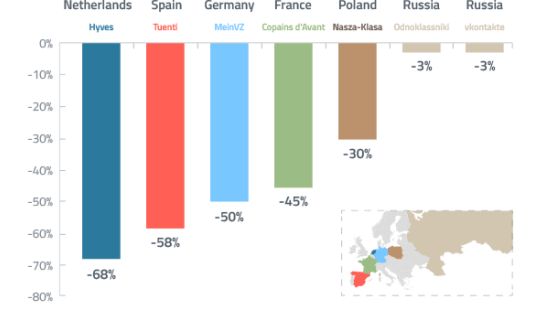 The WSJ notes that it’s not “immediately clear” whether any specific regulator was looking at lodging investigations that could halt the deal — it names only one regulator, Cyprus, as potentially going through an “ongoing procedure” around the merger. The issue seems to be whether any one country might be able to prove that the merged company would be too dominant in any one area in a way that it is not already.

Who else could get involved?

For now we have yet to hear from some of the bigger countries and their respective regulators on this story. For now one of the biggest regulatory stories in Europe to come out over the Facebook/WhatsApp acquisition has been in Germany, where Thilo Weichert, data protection commissioner for the German state of Schleswig-Holstein, urged users to switch from WhatsApp to a more secure service. In Germany, different regions have their own separate regulators, and the one in Schleswig-Holstein is no stranger to Facebook.

But, again, it’s not clear whether Germany, France or the UK may choose to lodge their own investigations here.

In the UK, Facebook is a dominant force already on mobile even without WhatsApp. There were 20.8 million mobile phone Facebook users in the UK in 2013, according to eMarketer. That is up 41.7% from 2012 and accounts for 40.7% of all mobile phone users and 72% of Facebook users.