It’s hard to believe it here in Silicon Valley, but it’s been just four months since the “anonymish” social sharing app Secret could first be downloaded in the U.S. Today it will become available for download by anyone in the world, on iOS as well as a brand new Android app.

Secret, of course, is an app that allows users to share their thoughts and feelings with others via mobile app. Launched first on iOS, the app leverages your address book to allow you to see what your “friends” and “friends of friends” are also posting. Now on Android, it’s set to grow pretty dramatically.

On Android At Last

The launch on Android comes just six weeks after former Twitter mobile engineer Sara Haider joined Secret to lead development on the platform. Since then, the team has been busy building a version of Secret that is more than just a port of the iOS app.

And so, the Secret team set to work on building a version that would carry over all the same functionality as the initial iOS version, but would also stand on its own as a distinctively Android app.

Creating an Android version also meant the possibility to add some new features that were highly requested, but weren’t yet available on iOS.

One of those features is a separated feed for content that has been posted by your friends, and another explore tab for viewing content that has been posted outside your network. Previously content from your friends (and friends of friends) appeared in a single global feed along with content from strangers further outside your network.

According to co-founder Chrys Bader-Wechseler, the ability to view the feeds separately was one of the most highly requested features. It’s being added to the Android version exclusively at launch, but will be integrated into an iOS update soon, he told me.

Both iOS and Android versions also added a few new features that were designed to increase engagement with the app. If you’re on iOS, you’ve probably seen a new interstitial screen that pops up occasionally to tell you how many friends on Secret you have, with a prompt to invite more. (Fun fact: With 652 friends on Secret, I’m just a few behind Bader-Wechseler, who has 656.) 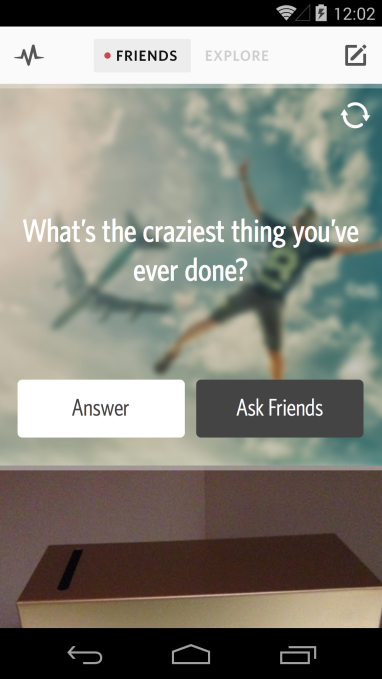 The team also changed the way users can share Secrets, adding a button in the upper right-hand corner of each that when brings up a prompt for Facebook, Twitter, Email, and SMS. It’s early days, but Bader-Wechseler tells me that sharing has increased dramatically since being moved to the home screen a few days ago.

Another new thing users will begin to see are Secret calls “Icebreakers,” which are prompts that will be inserted in-stream to inspire users to share their thoughts on the app. Icebreakers will be submitted by members of Secret’s community team (now three strong), and prompt users to either answer themselves or ask friends to answer.

The idea behind the introduction of Icebreakers was inspired in part by ways in which the community were already using Secret. Around Mother’s Day, for instance, users posted a series of “Dear Mom” Secrets, sharing their feelings about what their mothers (and the holiday) meant to them.

After launching in the U.S. in February, the company has been slowly rolling out to a number of other English-speaking countries, including places like Canada, Australia, New Zealand, Ireland, and the U.K. But with today’s the launch on Android, Secret is also opening up to the whole rest of the world.

Before doing so, the team wanted to work out the kinks and make sure that the app was ready for primetime before making it globally available. But now, especially with an Android version available, there was no reason to continue holding back.

“There’s no reason for us to be holding the project hostage,” Bader-Wechseler said. “It’s only been four months, but now the real journey begins.”

While the app itself is English-only for now (Bader-Wechseler says localized versions of the app will slowly roll out later this year), the company fully expects its users to share in their native languages. To ensure that Spanish Secrets don’t appear in German streams and vice versa, the app will geo-fence what users share so that what appears in the “global” feed is relevant — and understandable — to users.

So Secret is now on Android, and now available pretty much everywhere. With all that done, it will be interesting to see what the team does next. Messaging, perhaps?