A former Facebook Product Manager has teamed up with the former science director from Southern California-based LePort Schools to create a new educational platform designed to inspire kids to learn to love science. Called “Mystery Science,” the program is being offered to teachers and schools, and involves a combination of short videos, classroom discussion topics and hands-on projects. The lessons are aimed at children in 3rd and 4th grades, and are aligned with Common Core and Next Generation Science Standards, in order to supplement the existing curriculum.

According to co-founder Keith Schacht, who previously worked on Facebook’s News Feed product, “what we’re motivated by is changing the way science is taught,” he says.

Schacht explains that today, science education has been boiled down to essentially “a list of vocabulary words” and a series of conclusions to memorize, and is not teaching kids to appreciate science, and its numerous mysteries. (Hence the name.)

“Kids graduate without any basic scientific understanding of the world, no real appreciation for scientific discoveries, and they don’t know how to think about problems scientifically at all,” he adds. And yet, we expect them to make decisions on important scientific matters, like whether to vaccinate their own children or avoid pesticides on their food, as well as answer more everyday questions, like diagnosing why their internet connection doesn’t work.

He says kids are taught basic facts today – things like the various parts of the cell, the names of the elements, or the layers of the earth – the crust, the mantle, the core, e.g. But no teacher ever told us that we’ve only ever drilled down a few miles into the crust, says Schacht.

“How do we know there’s a molten core down there? That’s actually the interesting conversation to be having.” 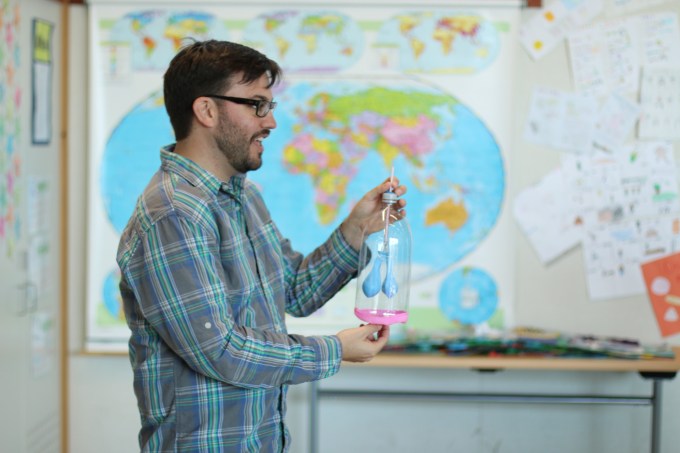 Inspired by his own love for science, Schacht and his longtime college friend Doug Peltz, who had created an original way of teaching science for LePort Schools, teamed up to create the new company.

Peltz says he realized that his way of teaching science wouldn’t effectively scale just by creating a curriculum binder, then handing it out to other teachers. They needed a technology platform in order to have a broader impact.

With Mystery Science, which LePort invested in, along with LearnCapital, NewSchool Ventures, 500 Startups, and others, the company offers a web-based product which first introduces the “mystery” the children will learn about that day with a brief, 1 to 2 minute video. Next, the teacher uses accompanying material to lead a classroom discussion and have students arrive at a consensus. He or she then presses play on the video again to take the lesson further. This is followed by an activity video which allows for hands-on learning.

In total, most lessons include four 2-minute videos which are played and stopped while the class discusses the subject. The company produces all the videos themselves, with Peltz doing the narration. Mystery Science recently ran a pilot program with a dozen elementary teachers and a dozen homeschool teachers, and is now hoping to roll out its lessons for the next school year to a handful of schools. The goal is to reach at least a few schools by the time the school year starts, as well as pre-register thousands of teachers in the weeks ahead, following today’s public launch.

Teachers will receive one free unit, while pricing for the remaining lessons has yet to be determined. The plan is to have teachers either pay for these themselves from their supplemental budget, or ideally, sell into the schools themselves, which could be challenging.

The company has raised half a million in seed funding from investors, and is currently operating as a small team based in San Francisco. Interested users can sign up on the company’s website here.