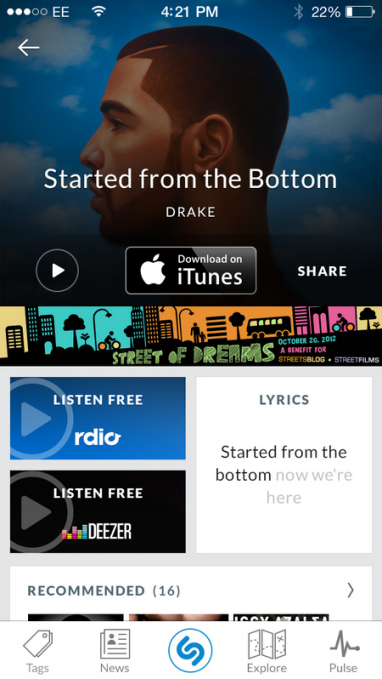 Just over a week ago, Shazam updated the free version of its mobile apps for iOS and Android so that users in the UK (and Germany, Mexico and Brazil, as it happens) could now open and play tracks that have been identified and ‘tagged’ by the app, in music streaming service Deezer.

What wasn’t made explicit at the time, however, is this was at the expense of support for rival music streaming service Spotify . In other words, in said countries, one service has been bumped by the other — a curious move for the UK where both Shazam and Spotify are wildly popular.

“I can’t believe it,” a friend wrote to me upon discovering the change. “Shazam is next to useless for me now”.

For him — and many others like him, judging by complaints on Twitter and Shazam’s own support forum — without the ability to quickly search for ‘Shazam’ed’ tracks on Spotify, where he consumes most of his music, the app’s utility has been rendered nearly worthless. To make matters worse, he had previously paid to upgrade his version of the Shazam app for unlimited tagging, a feature that has since become free if you don’t mind putting up with ads.

Interestingly, Shazam Encore, the premium version of the app, appears to still feature support for Spotify. “You get what you pay for,” you might well say. But, still, the business case does seem arbitrary for the UK market.

(Update: Readers are reporting that Shazam Encore in the UK has also now dropped Spotify support.)

The free version of the UK app has chosen to support iTunes, Deezer and Rdio when — based on mindshare and, most likely, user numbers too — Spotify is the larger of the two streaming service here in Blighty. Whilst we aren’t privy to the commercial arrangements between the two companies, it’s hard not to argue that these are being put ahead of the interests of UK users.

“What you are doing instead is not offering the by far most popular service… and pushing another, less known service instead,” writes one disgruntled user on Shazam’s help forum. “So this is obviously a commercial decision,” he speculates, advising others to switch to Shazam competitor Soundhound, which continues to support Spotify.

Billboard was the first news site to pick up on the changes, and at the time Spotify PR appeared to be somewhat blindsided regarding the changes.

I’ve put my own request for comment in to both Shazam and Deezer’s UK spokespeople. After nearly four days of deafening silence, here’s what Shazam CRO, Kevin McGurn, has to say in a statement provided to TechCrunch:

“The streaming space is getting extremely competitive and we are excited to see a lot of companies in this space interested in working with Shazam. Every country is different and is its own market and its own opportunity, which is why streaming companies – as well as Shazam – need to take a country-by-country approach as we evaluate integration.”

Comforting words for Shazam users in the UK, I’m sure.

Furthermore, a Shazam support person writes on the company’s support pages: “In Germany, Mexico, UK and Brazil we’re currently offering Deezer playback instead of Spotify within the free app. We’re currently trialling different streaming partners to see which are used by more of our users. Spotify integration (which we’re currently working on to improve) may be returned at a later date.”

Make of that what you will, though — presuming the company has heeded the backlash — I wouldn’t be too surprised to see Spotify support return to the UK Shazam app sometime in the not-too-distant future.