Around a year and a half ago, a company called Mozio debuted its plans to introduce an airport ground transportation search engine that would help travelers book that “last leg” of their trip: getting from the airport to their final destination. Today, the company is announcing it has raised $750,000 in seed funding from a number of strategic backers in the travel industry, including Orbitz’s Chairman of the Board and the founder of car rental agency aggregator, CarTrawler.

Co-founded by fellow University of California Berkley grads, David Litwak and Joseph Metzinger, the idea for Mozio initially grew out of Litwak’s own travel experiences and struggles. As he previously explained to us, he had traveled abroad to 55 countries, and found that all the major travel search engines ignored the final part of your journey – going from the airport to hotel. None were aggregating the fares for things like taxis, trains, buses, ferries, shuttles, limos, and other means of ground transportation, which, as any seasoned traveler could tell you, can often be quite pricey.

“I found myself paying $70 for an SFO to LAX flight, but $45 for cabs each way,” says Litwak, offering one example of the expenses involved. “We have sites that compare flights…but there are no sites that consolidate the ground transportation options,” he says. “We have all taken this part of the travel planning process for granted.”

With Mozio, the founders want to build a service that’s similar to what ITA Software did for flights, but for local ground transportation. Other companies are also mimicking the ITA model for similar goals, Litwak notes, like SilverRail which recently raised $40 million to help travelers book train tickets for any rail line, or Wanderu, which is looking to do the same for city buses. 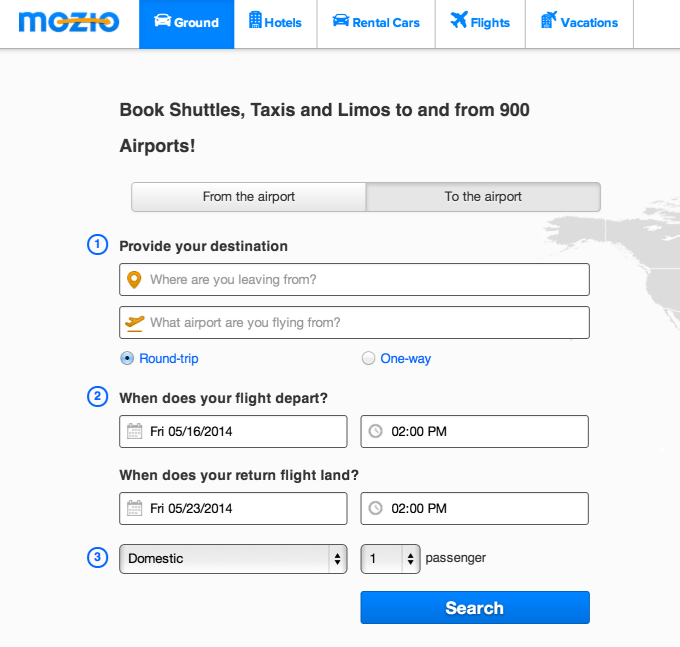 While covering the entire spectrum of ground transportation options is Mozio’s long-term goal, the company today is starting with a narrower focus: airport transfers. Its airport transfer search engine currently covers over 1,000 airports with 800 transportation providers. Litwak says the company has the best coverage in the U.S. for now, but also has coverage in Europe, Latin America, Canada, Australia and Asia.

Though the company does offer a public-facing search engine, its main business is as a B2B, white label solution. Mozio has a handful of larger clients, and promises that more are in the works.

Litwak says they did over 100,000 in bookings last month and have been growing at 20% month-over-month.

The new funding will allow Mozio to integrate with several airline booking engines, and large online travel agencies, as well as expand into new geographies.

“We want to not only round out our coverage in Europe, but make sure we have partnerships in places like Bahrain and Madagascar, so that no matter where you are traveling to, you can rely on Mozio for your ‘final mile’ of transportation,” says Litwak. Part of that expansion will also include bringing in other forms of transportation, like ride-share programs, or even water taxis. The company recently closed a deal with ride-share platform Wingz, which specializes in going to and from airports, and is working on a deal with Amtrak.

San Francisco-based Mozio is also using the funding to hire – they’ve just brought on their third team member, with a plan to add three more in the next month or so.