Mozilla today announced that it will reluctantly implement the HTML5 DRM standard in its Firefox browser.

With more and more copyrighted content being streamed over the Internet, rights holders have long been worried that there is no standardized way to wrap a DRM solution around these streams in HTML5 without resorting to using Flash or Silverlight. A while ago, Microsoft and Google decided to implement the somewhat controversial W3C Encrypted Media Extensions (EME) that define how browsers handle DRMed content in HTML5 in their browsers.

Mozilla, however, was always on the fence, and its former CTO (and short-lived CEO) Brendan Eich wrote a strongly worded blog post about how the current standard was not in the best interest of users and developers. He did leave the door open for Mozilla to implement EME, however, and mostly argued against it because the W3C standard would implement new and non-standard plug-ins — the Content Description Module (CDM) — into HTML5. The W3C doesn’t specify which CDM a browser should use and Eich argued that because of this, “each browser may end up having its own system.” 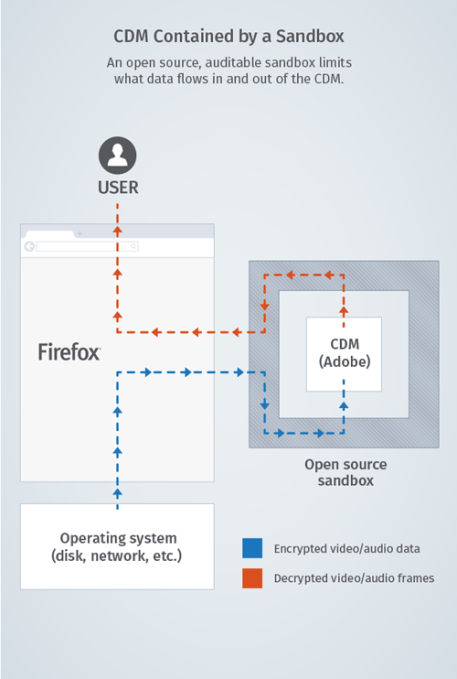 In today’s announcement, Mozilla Chairwoman Mitchell Baker acknowledges that this new DRM solution “contains the same deep flaws as the old system.” In Mozilla’s view, “it doesn’t strike the correct balance between protecting individual people and protecting digital content. The content providers require that a key part of the system be closed source, something that goes against Mozilla’s fundamental approach.”

So if Mozilla is against this, why implement it? Because of market momentum. Unless Mozilla implements EME in its browsers, its users will have to switch to another browser to watch content from Netflix, Hulu and others soon. “We have come to the point where Mozilla not implementing the W3C EME specification means that Firefox users have to switch to other browsers to watch content restricted by DRM,” Mozilla’s Andreas Gal writes. “While we would much prefer a world and a Web without DRM, our users need it to access the content they want.”

The organization is going to work with Adobe, which will supply its CDM for Firefox. This partnership makes sense given Adobe’s leading  position in the DRM space. Gal says that because the CDM will run in a sandbox, it won’t be able to fingerprint the user’s device and won’t get access to the hard drive or network.

The CDM will be distributed by Adobe and won’t be included in Firefox by default. Instead, the browser will download it and activate it based on the content the user is watching. The user will always be able to choose whether to active the CDM or not.

If you are ideologically opposed to DRM, then Mozilla’s move today will feel like a defeat and there are some obvious reasons why one would oppose a solution like this. Eich himself put it pretty clearly last year: “We see DRM in general as profoundly hostile to all three of: users, open-source software, and browser vendors who aren’t also DRM vendors.”

At the end of the day, however, Mozilla also needs people to use its browser, and if they can’t play back the content they want to watch, they will simply move to another browser. For most users, after all, the web isn’t about being open and DRM free, it’s about watching cat videos and episodes of 19 Kids And Counting. It’s clear that this is an uncomfortable position for Mozilla to be in. It’s a mission-driven organization and it should simply oppose this move if it doesn’t believe in it. But if nobody uses Firefox, there’s no mission left to be had.