Ahead of tomorrow’s vote on the consideration of new net neutrality rules, House GOP leaders today published a letter to the FCC’s Chairman Tom Wheeler, pushing back against regulating the Internet, especially in the context of reclassifying broadband access as a utility on Title II authority.

Their letter is perhaps expected, given that opponents of government regulation have something of a history of opposing net neutrality, given a confused conception of how we got to where we are today regarding the Internet.

The Internet was born, grew up, and became the engine of social, economic and political change that we know today without net neutrality rules. And, despite the distinctly international flavor of today’s Internet, let us not forget that it is an American invention.

Sen. Al Franken as quoted in Time a few days ago:

“We literally have members of Congress—I’ve heard members of the House—say, ‘We’ve had all this innovation on the Internet without net neutrality. Why do we need it now?’” he told TIME in an interview last week. “I want to say, ‘Come on, just try to understand the idea. Or at least just don’t give a speech if you don’t know what you’re saying. Please—it hurts my head.”

You can’t square those two positions. What Sen. Franken is pointing out is simple: The growth and vitality of the Internet that the House GOP highlights occurred during a time in which the web operated along the principles of an open Internet. The FCC is now trying, again, to codify that reality so that the very innovation the House GOP wishes to continue, can.

Arguing that past innovation under a set of market conditions is best served by allowing for that market to become distorted so that similar innovation can take place in the future is a somewhat confusing position to take.

In the first corner, you have the GOP and ISPs. Chariman Wheeler is one of the few taking position two. And in the third corner swaths of Democrats, and Internet companies themselves. Tomorrow is a big day, so strap in.

Here’s the full text of the letter, as signed by the Majority Leader, Speaker of the House, House Majority Whip, and the House Republican Conference Chair: 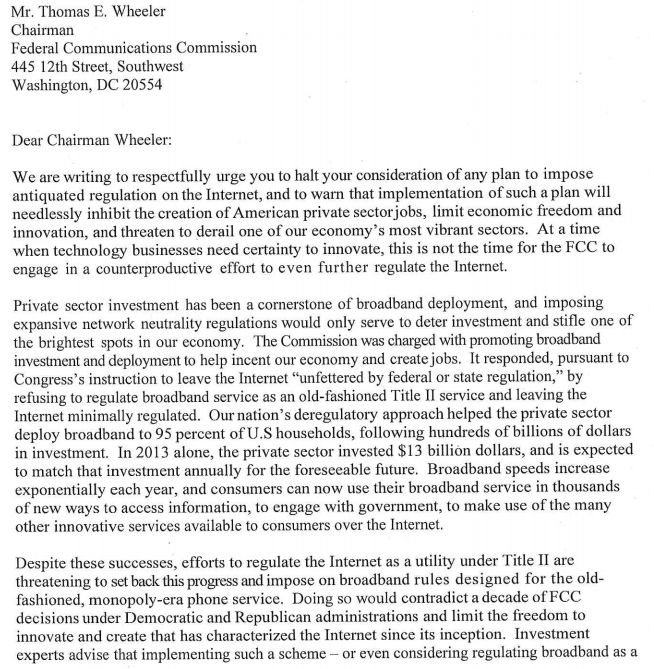 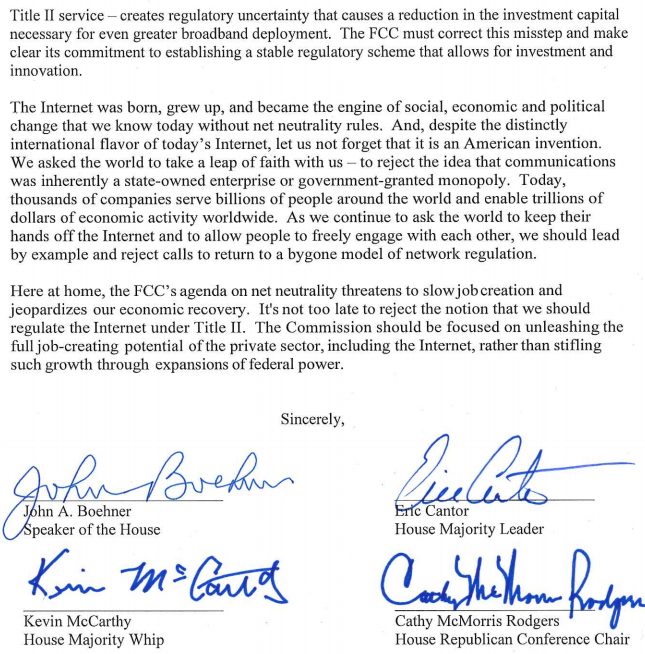 IMAGE BY FLICKR USER MATT NEWMAN UNDER CC BY 2.0 LICENSE (IMAGE HAS BEEN CROPPED)