Just over a week ago, UK startup Bloom.fm, which offers a nice alternative to uber-streaming music services like Spotify with a tier that starts at just £1 per month, dropped a bombshell. Its backer, Russian TV channel TNT, had withdrawn funding on extremely short notice after an organisational change, and with it the young company was calling game over.

“This is a poetically crappy turn of events as our young business was showing real promise. Our apps and web player are looking super-nice and we had 1,158,914 registered users in a little over a year,” wrote Bloom.fm on its blog.

But a week is a long time in startup life, and with Bloom.fm now officially in administration, the company is actively seeking — and hopeful of finding — a buyer. I understand that 20 interested companies have already gone through to the second round and are at the due diligence “light” stage, which certainly sounds promising. The deadline for interested parties is tomorrow morning. 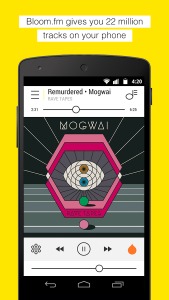 Bloom.fm claims 1.2 million UK registered users for its iOS and Android apps, with a web version and Sonos integration ready to launch. A version for Windows Phone is also already in development.

However, the company isn’t saying — and never has done publicly — how many of those registered users are paying subscribers. Though really it’s still early days and my understanding is that partnerships were in play to funnel more users to its paying option. After signing an NDA, interested buyers get access to that information (and a lot more) of course.

When I first wrote about the startup in May last year, I described it as a mobile-first music streaming service, launching four months earlier as an iOS only app and offering an innovative mix of free and paid tiers.

With a catalog of 22 million tracks — the company has licensing deals in place with all the leading major and independent labels, aggregators and publishers — the app can be used entirely for free in streaming-only internet radio mode, or you pay for more flexible access. The latter is pitched as a “borrow, enjoy, return” model and, as I understand it, targets teens who find going from free, as they typically consume most of their music on YouTube, to a standard £9.99 subscription is a step too far.

Starting at £1 per month (or £1.50p as an in-app purchase thanks to Cupertino taking a cut), users can temporarily download 20 tracks from Bloom.fm at any one time. That’s roughly two albums’ worth of music, which doesn’t sound like much, but these can be refreshed at any point. Bloom.fm also offers £5 and £10 plans for 200 and unlimited tracks, respectively.

All in all, its raison d’être is that it offers a music streaming service to those for whom other music streaming services are unable to reach. And it’s for this reason co-founder and CEO Oleg Fomenko is very hopeful of finding a buyer, who would likely pick up the London-based startup at a very significant discount. This is a firesale after all.

Fomenko won’t name any of the companies he’s talking to, except to say they are media groups, competitors in the music app space and “UK household names.”

We should know a lot more in the coming weeks.