A bizarre, “organically” shaped iPhone case called The Feeling Skin was spotted at this week’s TechCrunch Disrupt Startup Alley, purporting to be the first “smart battery case” for iPhone. The project, which would compete with things like Mophie cases for example, is designed so that it doesn’t require you to manually switch the battery case on when you need a little juice. Instead, The Feeling Skin senses when your battery is low, and automatically charges your phone.

But that’s not it – the case is also a “social object,” its creators tell me, lighting up an LED on its back as a way to communicate with your friends, or receive alerts about other activities, like incoming mail, for example – or anything else you want to hack together using the provided API.

This addition makes the case seem more of an art project than a business, because it’s sort of an oddball feature that mainstream users won’t likely want or understand (at least, not yet!).

But still, it’s interesting from a conceptual standpoint. 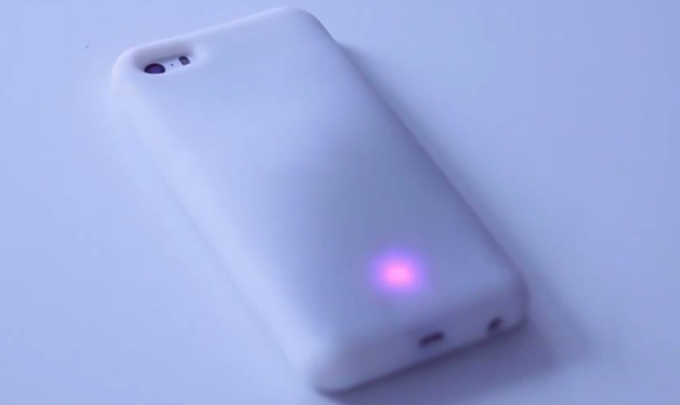 The idea is that the case works along with an app that also allows you to configure various settings, including what color the LED should display for which type of message, as well as monitor your smartphone’s battery life. By default, the creators have made it so that you push the button on the case’s back to share your “mood” with friends, but as noted above, this is configurable.

The Paris-based team works at Twelve Monkeys Company, founded in 2012 by Rémy Koné, Davy Frot, and Adrien Courty. They’re now a team of five, largely bootstrapping their project to life. “Phones became smart, but smartphone accessories remained ‘dumb,’ explains  Koné, as to why the company created The Feeling Skin in the first place. “We want to make smartphone accessories smart and social,” he says.

The company is selling cases for $49 on Kickstarter. But because the case has a weird, lumpy shape it’s not something I’d personally recommend. However, it’s interesting to see people experiment with ideas about how the back of the phone can be used to display more information.

One more polished competitor with a similar idea is the recently debuted Lunecase, which uses electromagnetic energy to light up the LED light on its back to indicate when you’re receiving incoming calls and texts. It’s also on Kickstarter, raising funds.