An alleged former Google employee has anonymously published unconfirmed allegations that AdSense purposefully banned publishers right before their periodic payout so it could keep their ad revenue. But Google denies this as “a complete fiction”, and based on our examination of the report, the allegations look false. There may have been mechanisms in place to prevent scamming publishers this way, and linguistic clues suggest the author didn’t work at Google.

At our request, Google provided TechCrunch with this statement strongly denying the accusations:

“This description of our AdSense policy enforcement process is a complete fiction. The color-coding and ‘extreme quality control’ programs the author describes don’t exist. Our teams and automated systems work around the clock to stop bad actors and protect our publishers, advertisers and users.

All publishers that sign up for AdSense agree to the Terms and Conditions of the service and a set of policies designed to ensure the quality of the network for users, advertisers and other publishers. When we discover violations of these policies, we take quick action, which in some cases includes disabling the publisher’s account and refunding affected advertisers.”

The report doesn’t include hard evidence, and the whole thing might just be from a jilted publisher or someone else out to harm Google. Still, it could spark an investigation into AdSense’s banning procedure or at least a loss of confidence amongst AdSense publishers even if it’s untrue.

The whistleblower purports to have worked at Google since at least 2009, and says they waited until their identity could be concealed before coming forward. They wrote on Pastebin, “To sum it up for everyone, I took part in what I (and many others) would consider theft of money from the publishers by Google, and from direct orders of management.”

The full document is a bit meandering so here are the major points.

According to the source, Google experienced some financial department stumbles in 2009 and decided it “needed to tighten the belts”. The perception was that Google was writing too many and too large of checks to publishers, so it sought to curtail them. To do this, it implemented a new “quality control” initiative to ban publishers making more than $5,000 per month from AdSense, starting with a wave of bans in March 2009.

What alarmed the supposed employee is that “We were told to begin banning accounts that were close to their payout period…The purpose was to get that money owed to publishers back to Google AdSense, while having already served up the ads to the public.” This way, Google would get paid by the advertisers, run their ads on the publishers’ properties, but then ban the publisher right before they were to receive their payout for showing the ads, and Google would keep the money, he alleged.

Google employees were supposedly told that “it was needed for the company, and that most of these publishers were ripping Google off anyways, and that their gravy train needed to end.” Employees who didn’t go along with the plan were ridiculed for not being team players, and some resigned, the employee said.

Next, Google supposedly wanted to further automate the process, so it set up the “AdSense Quality Control Color Codes” system which identified lucrative publishers to ban, and protected larger corporations and anyone else who could hurt Google with negative press or by drumming up anti-AdSense sentiment amongst publishers.

Finally, the whistleblower suggests that Google was aware of a practice known as “Click-Bombing”, where a publisher would repeatedly over-click the ads of a competitor to get it flagged and banned by Google’s fraud system for self-clicking.

Obviously, someone aiming to hurt Google could get a lot of mileage by publishing these allegations. That motive led us to closely analyze the document for any red flags. We found many.

First, the language. The author refers to Google’s “AdSense division” rather than its official internal title “Online Sales And Operations”. He refers to “being a team player”, but down in Mountain View they call that “being Googley”. He also refers to “invalid clicks” which are much more commonly known as “click spam” at Google. “Click bombing” is a term that wasn’t used internally, we’ve heard, and only makes up a fraction of all invalid clicks. 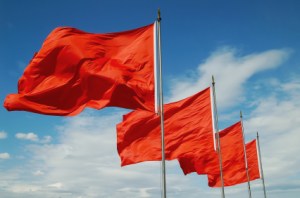 The report also makes a lot of claims about the problems with these so-called ‘invalid clicks,” And while it’s true that competitors will sometimes click another’s ads, Google’s detection system is actually fairly sophisticated. It can tell when clicks are from the publishers themselves, which will get them banned, but it can also tell when the clicks come from a novice Internet user, in which case it will disregard some of the clicks but not all. And it can also tell when they come from some other malicious party, and it then disregards those clicks across all Google publishers.

Then there’s the functional discrepancies. AdSense’s billing is believed to require a publisher to be paid for an advertiser to be billed. That would block Google’s ability to charge an advertiser but not pay the publisher. Google’s policies explain that if a publisher is suspended for policy violations, “Payment for the 60 days prior to the disabling will be withheld and the money will be returned to impacted advertisers.”

The report also states that employees wanting to use AdSense on their websites were “automatically placed in the Green Group” which the poster refers to as VIP Status or the “untouchables.” That’s not quite the case. In reality, any Google employees with an AdSense account would have to get VP approval to use AdSense on their sites, and those accounts would then be heavily scrutinized.

And the biggest inconsistency of all is simply that this strategy for making money in the short term would decimate Google’s long-term revenue potential. Why would Google sacrifice all future earnings from a publisher just to snatch a month or one billing period worth of revenue? The economics just don’t add up. Google works with more than 2 million publishers and paid out $9 billion last year. Burning those publishers for a quick revenue hit just doesn’t make sense.

With so much pointing to the whistleblower not being a Google employee and the whole scheme being dysfunctional, it’s hard to believe the report.

Once you have a good grip on the kind of lingo an ex-Googler would use and a greater view of the economic ramifications of these claims (if true), the “leak” appears to read more like the allegations of a disgruntled, banned publisher rather than someone intimately familiar with Google’s internal operations, language and AdSense platform as a whole.