There is nothing more appealing to a nerd than space, as decades of television, the buzz around the Mars Rover landing and Elon Musk can attest to. This is probably why modular integrated circuits startup littleBits has partnered up with NASA to create the littleBits “Space Kit.” The kit will cost $189.

littleBits is hard to wrap your head around if you don’t actually have the product in hand. But once you do, the mix-and-match modules can be inspiring, teaching you — if you’re a normal — more about electrical engineering than anything else in your purview. Lesson one: You always need Power (blue) and Output (green) in order to create a minimum viable electronic circuit.

“If you think of a littleBits module as a brick – essentially a building block from which you can make anything – then you could say that Lego is the closest comparison of an infinitely extensible library,” says founder Ayah Bdeir, who recently spoke at TED. “Of course we’ve added another dimension entirely to our bricks by building the power of electronics into them.” 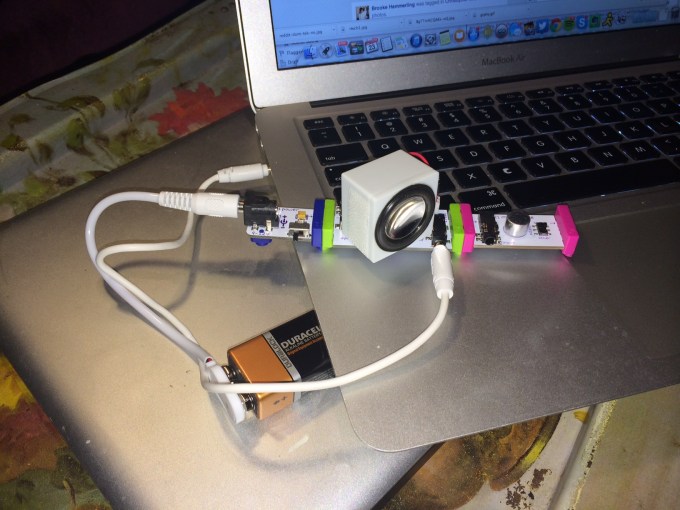 This is my basic speaker bit I built with the kit last night.

While she would not share revenue numbers, Bdeir told me that the “21st century brick” startup has sold “hundreds of thousands of units” in over 70 countries, in 2000 schools and has “trillions of billions of combinations” possible in its open source library.

NASA approached littleBits in 2012, with the aim of educating more people about space travel. The collaboration’s specific purpose is to promote interest in STEM education, making robotics, energy and wireless data transmission easily accessible to people who didn’t get a degree in engineering.

Each Space Kit comes with 12 magnetic modules, including a numbers module, remote trigger and infrared LED sensor. The kit also comes with a booklet of circuit applications written by scientists at NASA, instructions on how to build your own wave generator, star chart, satellite orbit and model Mars Rover.

“We get A LOT of partnership requests but we picked NASA because space is critical, and massively important to every single person in the universe, and to society in general,” Bdeir writes, “But only so many of us understand what all these discoveries mean, and how they relate to us.”

The company plans to keep up the NASA relationship (you never know when that might come in handy!) and is organizing a series of hackathons and workshops around the kits, again hoping to get more people revved up about science and technology.

If someone had given one of these to me when I was seven, I probably would have become my dad.