As wearables continue to evolve, we’re seeing the blend of wearables and jewelry, and the importance of form factor in adoption. Misfit is debuting a sleek new necklace as the newest way to wear its Shine activity tracker. The company is also debuting two new colors, Storm and Coral.

Misfit was co-founded by former Apple CEO John Sculley along with Sonny Vu and Sridhar Iyengar, who were behind the medical devices company that had the first Apple-blessed add-on for the iPhone, which was a glucose meter. Launched last year, the Shine is a quarter-sized activity tracker that awards users points for walking, running and swimming among other activities. Unlike other wrist-bound activity trackers, the Shine can be worn anywhere — as a clip-on to your shoes or your shirt or as a necklace. That form factor has made it surprisingly popular among female consumers, we’ve heard from sources close to the company.

Similar to the Jawbone UP, the Shine pairs itself with a mobile app that shows daily graphs of activity. Place the Shine on top of your smartphone and little circles radiate outward from the device until your phone downloads the data it contains. 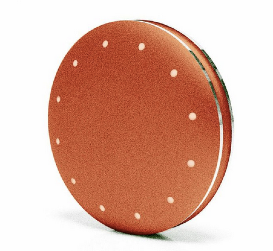 The Shine has offered a number of colors, including gold, silver, and blue. Today, Misfit is releasing navy blue (Storm) and Coral versions of the Shine. The necklace is a hand-ﬁnished stainless-steel pendant that features a spiraling geometric design on an 18-inch stainless-steel chain. The magnetic Bloom clips to the Shine fairly easily. The necklace costs $79.99 on Misfit’s site.

Misfit, which has raised $23 million in funding, has also offered a rubber sports band, a leather band, a leather necklace, as well as a collection of clothing that holds the Shine. The Shine and its accessories are sold on its site and at retailers like Apple, Best Buy and Target. Coral and Storm are colors exclusive to Best Buy and they will be only be available in stores and on BestBuy.com starting April 27.

I for one would definitely use the necklace, and the design, which seems to aim toward women, is versatile.

The company tells us that it has shipped nearly 300,000 units to date. With the rumors swirling around Nike’s reported shutdown of its FuelBand and Basis’s $100 million-plus exit to Intel, it’s an interesting time in the wearables space.