Do you feel blue when separated from your cat for any length of time? (I hope so, because then I’d feel a lot less alone). Despite their rugged individuality, indoor cats need to satisfy their stalking instinct, keep stimulated, and get enough exercise, according to the Humane Society. Kittyo is a device that lets owners play with their cats while spying on them from afar.

Its Kickstarter campaign launched just two days ago, but Kittyo has already raised nearly $120,000, four times its original $30,000 goal. The size and shape of a small coffee maker, Kittyo is controlled with an iOS or Android app and lets owners play with their cats using a built-in laser beam, give them treats from a dispenser, and monitor them or take videos with a built-in camera, and microphone. 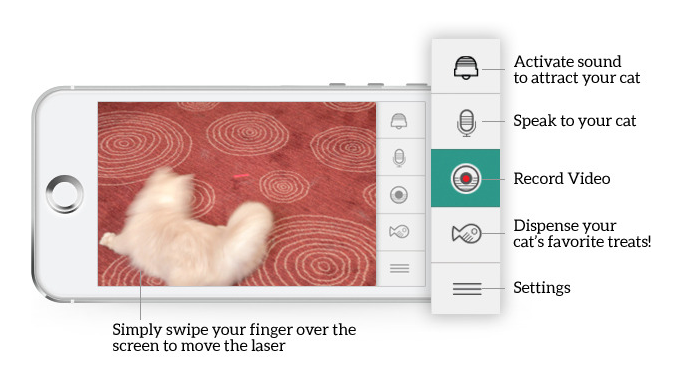 A speaker also lets you talk to your felines, provided they care to listen. Unfortunately for cats, they can’t knock Kittyo over and watch it shatter into a million twinkling pieces on the floor, because it comes with clamps that attach it to walls or a shelf.

Kittyo was conceptualized when its creative director, Lee Miller, took care of a kitten for his friend. When she kept texting him for updates and photos, Miller realized how much smitten cat owners miss their furry friends. The Kittyo was created by Ion Design, a product development studio, and its production is overseen by Eastbridge Engineering.

The U.S. pet care market is worth about $55.5 billion, and the connected devices market is expected to reach hit $309 billion by 2020 so expect to see many more devices that help owners remotely care for and pamper their dogs and cats. Ones that TechCrunch has covered include the PetNet smart food dispenser and Petcube, another toy that lets owners remotely interact with pets.

Kittyo will retail for $189, but Kickstarter supporters can save $50 or more. Its estimated delivery date is in November.