Confr does what it says on the tin: it allows you to create conference calls with a few clicks, a trick that many have tried but few have achieved. How is Confr different? Well, it’s run by former telecom folks and features a team of international engineers who have had to use their own product in order to build it. Aimed mostly at international teams who might not want to make international phone calls, it pairs a very simple web interface with good old POTS.

“We are a nine-person team working remotely from five different locations in Poland, Norway and UK,” said Kamil Roginski, a co-founder. “Our founders previously built Oyatel, a high scale telephony in the cloud SaaS, used by thousands of companies in the Nordic market.”

The team sold Oyatel in 2012 and looked around for a potentially disruptive follow-up. They decided to try their hand at the difficult cloud conferencing market in 2013. Thus far, they’ve done solidly but it’s been a rough year.

“We don’t have impressive numbers to show yet. Although that can change anytime now. A few days ago we signed a paying customer (a worldwide consulting company) with 300 active users and with the chance to add 3,000 more. More deals like this are upcoming,” said Roginski.

The system is simple. You create a free account and then add phone numbers in multiple countries. Those customers get a text message or email asking them to call a local access number – they support hundreds of countries – and the conference begins. Currently the system doesn’t support call recording or “speaking notifications” (little bubbles that pop up when someone talks) but more features are on the roadmap.

You are charged for the time you spend on the calls and new users get 200 minutes free. You can upgrade to a yearly plan and you’re allowed to add unlimited users. 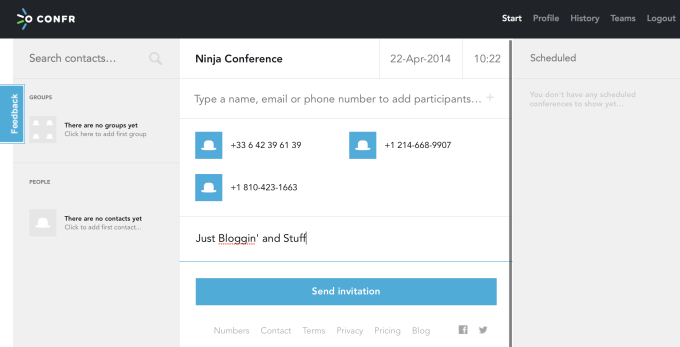 When we tried it, Romain was pleasantly surprised that he received a French access number while the rest of us received U.S. numbers. There were no PINs to enter if you called from the phone that originally received the text message.

“From our previous experiences of building a successful startup, we learned that having a team spread out in different locations requires some excellent tools to be able to collaborate in a good way,” said Roginski. “Google Hangouts and Skype are great alternatives when everyone involved is in an office or home with a good internet connection. But as most businesses know, over different locations and with many participants being on-the-go, these tools don’t really do the trick. Internet connection issues, hardware accessibility or hassle with everyone joining the call are common problems. This motivated us to create Confr – something simple, fast and cost efficient.”

The company is still small but they’re willing to try a few things to get attention. For example, the served “Norwegian brown cheese waffles” at a telecom conference in London, a tactic that helped them sign a big customer. Clearly cheese waffles have a far greater reach than any of us in the U.S. imagine.