Airbnb will finally have its day in court in New York this week, as the first oral arguments related to a subpoena filed by the state’s Attorney General are expected to be heard on Tuesday.

Last fall, the Attorney General filed a subpoena for thousands of records related to hosts in New York in an effort to identify bad actors and illegal activity on the platform.

While Airbnb said that it is also committed to removing bad actors on its website, the company argued that the subpoena is “unreasonably broad” in the amount of information requested by the government, and filed a motion objecting to it.

On Tuesday, the two parties will meet in court to argue each of their positions.

At the core of the dispute are illegal listings that the NY attorney general claims make up a disproportionate number of listings on Airbnb’s platform. While there is a narrowly defined law that allows residents to rent out rooms in their own apartments, the state is looking to go after hosts who operate multiple listings as a sort of virtual hotel.

Airbnb claims that about 87 percent of listings come from hosts renting out their own apartments, in many cases to help them make rent. But a study completed by data extraction company Connotate in late January found that in New York Airbnb had 19,522 listings and 15,677 unique hosts.

While the majority of those hosts had just one listing, the study found that 1,849 hosts had more than one listing for a total of 5,964 listings. In other words, 12 percent of hosts made up about 30 percent of listings in the city.

The company says it has been working to weed out hosts running large-scale rental operations. Data compiled by the NY AG late last week shows that not are there still a number of hosts with dozens of listings, but that since the subpoena was filed last fall, many have actually heavily increased the number of listings that they manage.

One host going under the name USA Stay! has more than 130 listings on the platform, according to that data. Meanwhile, two hosts have added 30 new listings in the months since the subpoena was filed. 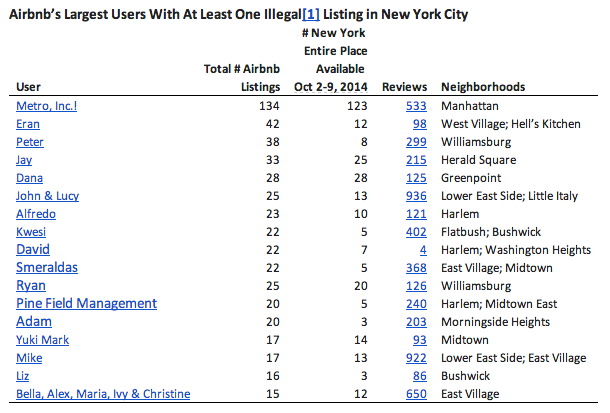 In a blog post and email sent to NY hosts today, Airbnb public policy chief David Hantman said the company would fight the subpoena in court this week. He wrote:

The judge in this case could issue a ruling on Tuesday, or take weeks or even months to make up his mind. He could rule in our favor, or against us. He might ask the Attorney General to narrow his demand. If we are ordered to hand over any data, we will work to ensure you are properly notified before the government receives any information about you or your listing.

Regardless of the outcome, Hantman wrote that the company would hold a community meeting Wednesday at 7:00 PM and a webinar the next day at 11:00 am.