There’s no lack of startups trying to rethink the mobile email experience, such as Mailbox, Boxer, CloudMagic, Triage, or Acompli, to name just a few. Now a new application called Gusto is throwing its hat into the ring, as well, with a smart email application that helps you more easily find files and photos within dedicated tabs, plus a powerful search feature that lets you refine keyword searches through a variety of filters, including file type, account, date, read/unread status, and more.

The company behind the product has quite the history. Originally called Sendgine, it was previously focused on building a secure messaging platform for legal communications, or something of a “Basecamp meets Gmail” type of product, explains CEO Shawn Schwegman.

Schwegman, a technology industry vet with decades of experience and an “appetite for risk,” as he puts it, was brought in to run Sendgine when the company had just two weeks of cash left. (It had previously raised $1.2 million from angels, friends and family.) 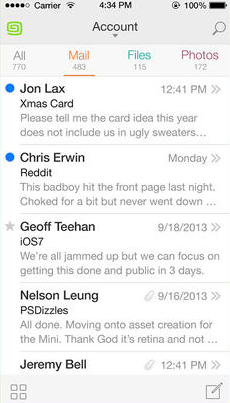 He was originally recruited for the CMO position, having served as CMO and, more briefly, CTO, at both Overstock.com and ChaCha. However, after hearing about the situation, Schwegman said he’d only take the CEO job if available, warning them that they pivot the company entirely, dump the code, launch a new, mobile-first product, and change the name.

The board quickly agreed. Sendgine’s co-founders Jeff Goens and Colin Matthews are no longer involved day-to-day, but Goens retains a board seat.

Since Schwegman joined Sendgine now Gusto, he’s brought in a new team of over half a dozen experienced engineers and architects and raised another $1.3 million ahead of launch. The idea to do mobile email came about because it offered both the “biggest opportunity and biggest problem” to solve, he says.

Schwegman initially thought they could re-use some code from Sendgine, but as it turns out, Gusto had to be built from the ground up. 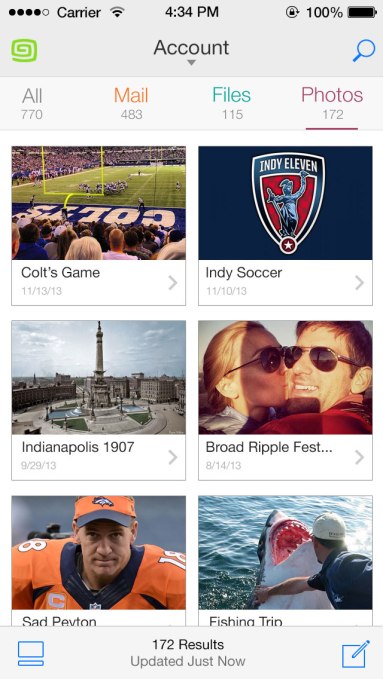 As for the email client itself, it’s fairly impressive for such a young product. The app mimics the default Apple Mail app’s look and feel, with the same font, spacing, the little blue dots indicating unread messages, the bottom-right “Compose” button, swipe-to-archive gestures, and more – all which makes Gusto feel less foreign.

But then it augments the experience with tabs at the top where you can surface just the files or photos you’ve been emailed. You can tap a button on the bottom-left to change the view from the standard list to expanded messages to two rows of smaller thumbnails. You can pinch to expand the message-list view to show more lines of email text and then pinch again to return to the normal view.

You can also more easily attach files or photos when composing new emails, as Gusto can quickly surface the list of all those files already sent to you from the attachment interface. The files are listed by date and are searchable.

And most importantly, you can tap the search icon in Gusto for access to a very precise search feature that lets you narrow down a keyword search by mail account, folder, date, read status, attachments, or other metadata when searching for files and photos.

For now, Gusto only works with Gmail, but a release due out in a few weeks will add support for Yahoo and Facebook. The latter option will allow you to surface just the notifications that are important to you – like the status updates or new photos from a significant other or family members, for example. In later releases, Gusto will add more mail accounts (the app lists Aol, Outlook.com and “other” as coming soon) and other cloud services like Google Drive and Dropbox. 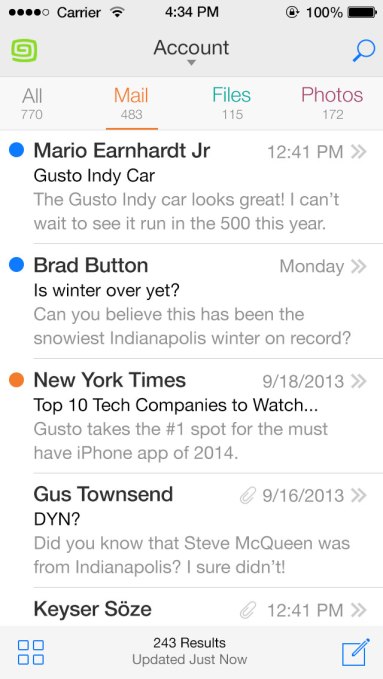 Some of the features Gusto offers are more similar to certain other email apps like Mailbox, which focuses on fast search and integrations with cloud services, too, or Acompli, which also breaks out files into their own dedicated sections, among other things.

But the larger vision for Gusto is to be more than just an email client. “We’ll really provide that one unified view of all files, photos and emails across all your accounts – that’s the goal.”

The app was soft-launched on the iOS App Store a few weeks ago, and hasn’t done any marketing. Of the handful (~2,500) of early adopters, 25 percent are returning to the app daily, which is promising.

The Indianapolis-based company has $1.3 million in pre-product seed funding from Elevate Ventures, which has been on a rolling close since November. Gusto will likely raise another $1 million in seed funding for additional operating capital and marketing.

Eventually, the company will go the freemium route to generate revenue.