SpoonRocket is about to have some competition in the lunch on demand market. Sprig, currently dinner-only, will soon start serving lunch, according to a source who said Sprig now delivers 1000 meals per day. Sprig just raised a $10 million Series A two weeks ago, and is wasting no time in ramping up the fight for our stomachs.

With this info, I called Sprig CEO and co-founder Gagan Biyani and he confirms Sprig is working out logistical details to start delivering lunch. He said it could be ready to go as soon as Monday but the company typically makes decisions last-minute and will launch lunch when it’s ready.

Before we go any further, these meal delivery services are the most magical-feeling startups I’ve experienced since Uber and Lyft. 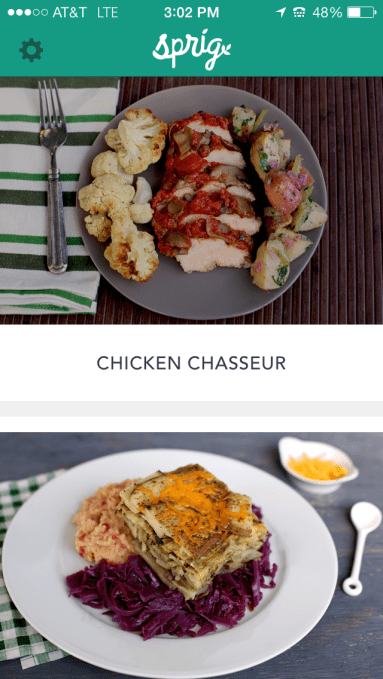 You open Sprig or SpoonRocket‘s app, and choose between two healthy yet tasty meals. It’s $8 plus tax from SpoonRocket delivered to the curb outside your place in San Francisco or the East Bay in about 10 minutes. It’s cheaper and faster but the food can taste a bit dry or rubbery at times, though still pretty good. Sprig is $10 a meal + $2 delivery fee for food brought right to your door in most of San Francisco averages 18 minutes (though I’ve had several deliveries slower than that), and the food is amazing with big portions.

I’ve had SpoonRocket meals arrive in as little as 3 minutes. Faster than I could walk to my kitchen and put peanut butter on bread. The ability to instantly satisfy your hunger with food you won’t feel guilty about and a price that’s cheaper than more restaurants is amazing.

Sometimes I’m hungry right this minute or need food before heading somewhere else, and lunch or dinner, SpoonRocket hits the spot. But if I’ll be around for a while and am craving something especially tasty, I’ll order Sprig. The problem is Sprig doesn’t do lunch.

But it’s about to. A source heard directly from Sprig that today it beta tested serving lunch and will launch soon. The current plan is for lunch to be available from 11am to 2pm, Monday through Friday, though this could change slightly. Lunch will complement the Monday to Thursday dinners it offers from 5:30pm to 9:30pm. The company apparently now has eight distribution centers in San Francisco that supply its drivers with 1000 meals per day to deliver. Job listings on Craigslist and Sprig’s own site confirm it’s preparing lunch. 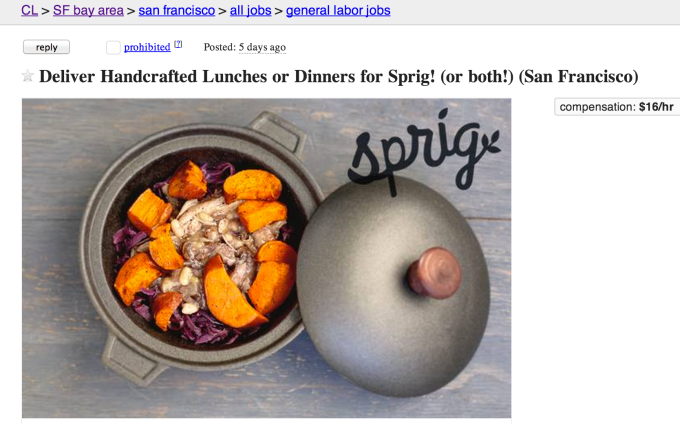 Neither Sprig nor SpoonRocket has achieved mass mind share and both are still confined to the San Francisco Bay Area. Following Sprig’s $10 million raise led by Greylock in late March, SpoonRocket just raised its own $10 million round from Foundation Capital and General Catalyst. Now they’ll both be spending in hopes of hammering out their logistics, growing their customer base, and becoming a household name.

With any luck, this will lead to a price war just like Uber vs Lyft, which has driven down on-demand car service rates in San Francisco. Because when food services battle it out, it’s our tummies that win.