Superb, a new application from the founders of Y Combinator-backed social dining startup Grubwithus, is launching today to people to connect in the offline world. Essentially a “Hot or Not” for local places, users swipe through a list of venue suggestions, including restaurants, bars, museums, parks, and more, registering their interest. Afterwards, they can see who among their friends, friends of friends and beyond also want to go to the same places and can then coordinate an outing.

The idea, explains Grubwithus, now Superb, co-founder Eddy Lu, is not all that different from the goal with the company’s earlier startup, which officially closed up shop at the end of last year. (The company has “years of runway” left thanks to an earlier $7.5 million round of funding, he says.) 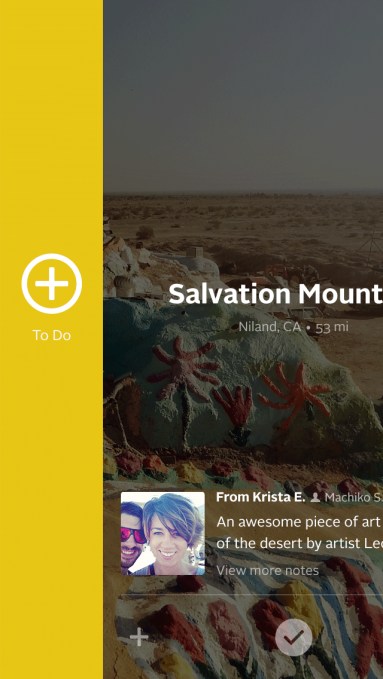 Grubwithus had aimed to send groups of friends and strangers to a new restaurant together by giving the merchant guaranteed business in the form of a prearranged number of seats under one prix fixe bill, but it also faced challenges in getting people to move from interacting online to connecting offline.

The company, at the time of closing, had served over 100,000 users throughout the U.S. and elsewhere in the world.

Similarly, with Superb, the team is hoping for the same overall goal of getting people to interact in the real world yet again.

The app itself is fairly simple to use. As noted above, there’s an element of something like Hot or Not or Tinder in the user experience. After signing up, you’re presented with images of places. (The company pulls venue suggestions from Foursquare and photos from Instagram, we’re told.) You then swipe in one direction to indicate your interest, or in the other if the place is just not for you.

There isn’t much information on the place’s card itself, but if you say you’re interested in visiting that place, you’re then presented with a screen showing the others in your network who want to go. 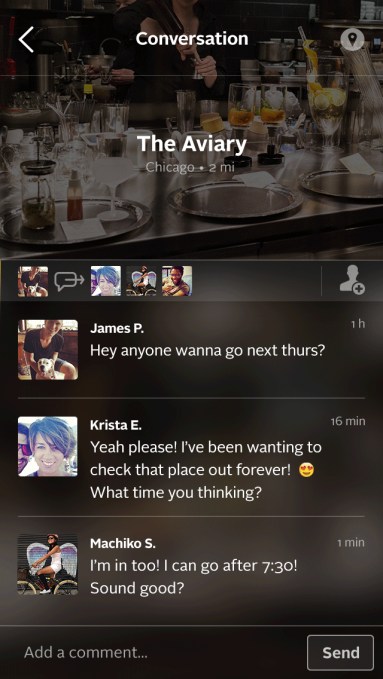 You can then initiate chats in the app with one or more of the interested parties.

“Facebook and Foursquare is either ‘I’m here now’ or ‘this is what I did in the past,’ we’re all about future intent,” explains Lu about what makes Superb different from other social networks.

While the concept also has some overlap with something like Meetup, for example, Lu says the idea is to offer a more lightweight experience. Meetup requires more work and involvement, he says – you have to join groups, RSVP for events, and then when you arrive, sometimes only half those who said they’d go will actually show up. Superb, meanwhile, leaves the planning process to you.

“The biggest use case is connecting you with people you’re connected with somehow, but true to Grubwithus fashion, if you want to meet new people and talk about new places with them, you can,” Lu adds. 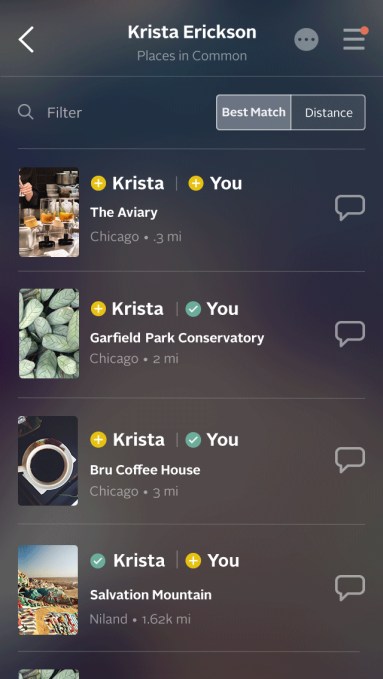 In practice, I found that the interface was better for indicating interest, but didn’t really eliminate the awkwardness of the initial outreach to a friend of friend or stranger – though, of course, people are becoming more comfortable this with kind of thing thanks to the numerous chat and dating apps out today. Still, someone has to be the first to begin chatting.

Users – Superb private beta tested with some 1,000 people – have already been hacking around the system to create new places so they could specify a particular activity, like an art show at a museum, for example. So the team is going to make improvements to allow for adding specific activities in a future version.