Berlin-based app search engine and discovery service Xyo is announcing today a significant deal which will see it powering app searches in Deutsche Telekom’s own app recommendation service, TopApps. The service, the mobile operator’s alternative to Google Play, launched to U.S. users on T-Mobile several years ago, and is also live in Germany, Austria and Switzerland, with other markets, including Poland, to follow. This new partnership puts Xyo’s smart app technology in front of 142.5 million mobile subscribers, the company says, and will also include advertising and Xyo-powered Android widgets.

App discovery has been a challenging business to date for startups who have to compete with the search tools and recommendations offered by the default mobile app stores, like Google Play or the iOS App Store, both which come pre-installed on consumer handsets. But today’s app stores rely heavily on Top Chart rankings, whose algorithms can be gamed by buying downloads and are increasingly hard to break into as the mobile app stores grow in size.

Xyo came up with a different method for helping connect users to apps, which involves a recommendations engine using people’s Facebook likes, their friends’ preferences and hundreds of topics their engine has categorized. As co-founder Matthaus Krzykowski explains, the company is also able to map out views, click paths and search queries in order to build unique “app personas” for its users, even when the user doesn’t provide social or demographic data.

In addition to powering Deutsche Telekom’s app recommendations service, Xyo will also later power other consumer-facing touchpoints, such as device widgets, with more to come. And it marks the first time Xyo is teaming up with a carrier for app search advertising, too, allowing partners to show app install ads to consumers searching for a particular app, indicating their intent to download. Publishers will now be able to book app install ads through Xyo for display on Deutsche Telekom services.

This is not the only carrier relationship Xyo now has, though it’s beholden to NDAs with others. 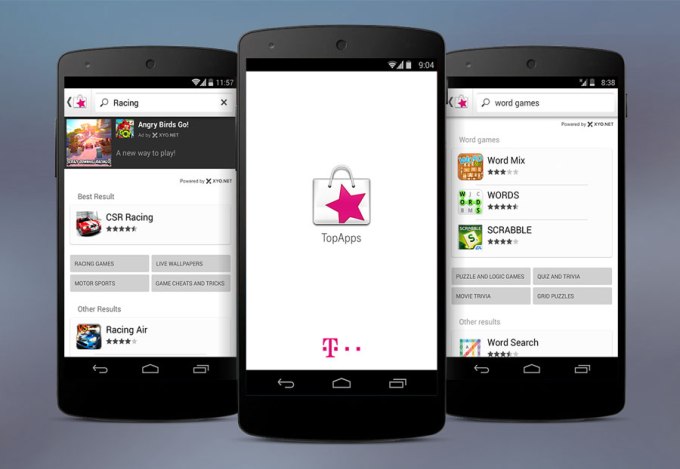 The move comes at a time when Facebook is dominating the app install ad market, with other players, including Twitter and Yahoo, now trying to also get a piece of that action. Even Apple’s recent changes to its App Store, with related search suggestions and select searches beginning with editorialized search results pointing to Apple’s own applications, could eventually be combined to offer prime spot for paid ads, too.

It’s not surprising, then, that mobile operators would also want to tap into the revenue potential the app store and app recommendations can bring.

Notes Krzykowski, “It’s the first time this really such advanced app search – an app search that uses the data from a user’s actions to serve up information before he asks for it – is publicly deployed and monetized by a carrier.

“This means that tons of users will get exposed to a very different – and in our view better – way of app discovery and that publishers will get the chance to buy app search advertising to get in front of these users in a much more relevant way,” he adds.

Xyo, which has also signed deals with Nokia and various carriers in the past, competes with other app search and discovery technology providers, including Quixey, which has deals with select OEMs and operators, too.