How was your last voting experience? Smooth? Perhaps not. The Open Source Election Technology Foundation wants to change that by making voting simpler and more transparent. Its chief effort, called TrustTheVote, is a push to develop airtight, open-source vote casting and tabulation software that can be paired with off-the-shelf hardware.

Open-source code and off-the-shelf plastic mean that TrustTheVote will, if it meets its goals, sell better, transparent voting machines to precincts at a fraction of the current cost.

Each major election cycle in the United States brings the same whispers: Irregularities in Ohio counties, odd voting machine behavior in Iowa, and constant fringe intrigue about which candidate is getting a secret electronic bump due to a distant relative’s relationship with a voting machine company. It’s not healthy for our democracy.

The democracy space is heating up. News came out this morning that Sean Parker has personally invested more than $9 million into a company designed to shake up American democracy. TrustTheVote has raised around $1.2 million to date in cash and a few million more in in-kind contributions. The group is looking to raise much more to staff up and get its product finished, onto hardware and into the wild of elections as quickly as possible.

TrustTheVote expects to have trials in the field by 2016 and a full rollout by the 2018 midterm election cycle. If that feels like a long way off, keep in mind that building voting technology is slightly harder than building other software — given the massive incentive for attack, the stuff has to be more than bulletproof. 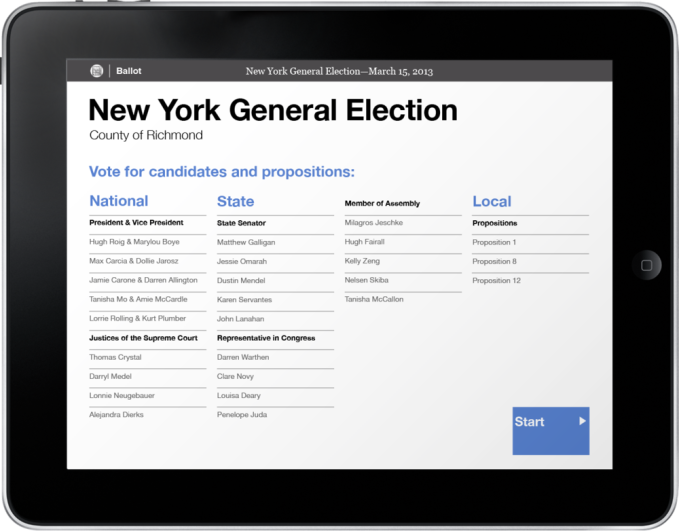 I caught up with Gregory Miller, co-executive director and chief development officer of TrustTheVote, to discuss what ails American voting and his vision for the technology most Americans should use to cast their vote.

(Author’s note: Answers have in some cases been edited for length):

Miller: Current voting machines are not high in quality of usability or ideally engineered for maximum disability accessibility. Many are also poorly designed in terms of ease of administration, leading to instances of election dysfunction labeled as “operator error” by voting machine vendors.

The biggest problem is how these machines are engineered to “pencil out” for commercial viability to the vendors. The majority of voting machines are based on technology (hardware and software) that is well over a decade, and in some cases, 20 years old. The technology employed and the innovation resulting is only as good as necessary to make for a profitable machine with a good margin (i.e., return on cost of goods sold). Accordingly, we would not say they are “inept,” but we do argue they are significantly weak if not downright vulnerable to problems, breakdowns, usability issues and compromise.

TechCrunch: Will TrustTheVote lower the potential of voter fraud?

Miller: The TrustTheVote Project work will significantly to increase transparency of elections operations, enabling greater public trust in election results. That transparency includes detailed information about both election administration and voting results and patterns. That information will enable the public to make their own judgment about fraud — both electoral fraud and voter fraud — as informed, fact-based, intellectually honest judgments, rather than in the province of conspiracy theorists.

TechCrunch: Is voter fraud a chronic problem in the United States?

Miller: Candidly, we’re not convinced that the machinery is the real culprit in elections abnormalities, irregularities or suspect results. You may have seen news breaking about voting machines being impounded for digital forensics in Hidalgo County, Texas, this past Wednesday. We believe the root cause of voter fraud or election fraud is social engineering. Today, it is very easy to point to the black box and make it the scapegoat. The TrustTheVote Project Election Technology Framework will turn black box voting into glass box voting, and we think shift the klieg lights off the machinery and on to the human processes.

Fraud has never been documented as anything other than occasional and rare. The same is true of electoral fraud. Admittedly, the perfect fraud, or hack or theft is the one that goes undetected. So we must be vigilant in monitoring, observing and verifying. The perception of belief of significant fraud persists due in part to the lack of any documentation of the actual events that could reveal fraud.

It’s an interesting moment for open source technology, given the recent Heartbleed flaw in OpenSSL, but I haven’t yet met someone predicting the end of open source as a method for creating software. And, especially since we’re discussing how to collect and tabulate votes, transparency is a good thing.

The alternative, according to Miller, is to re-up with old technology. According to him, “Voting machinery — the vast majority of what is currently installed across the country — will need to be replaced over the next 4-6 years as they reach the end of their life in terms of physical durability and reliability. Replacement choices (without the kind of alternative we’re developing) will continue to be expensive, closed-proprietary “black box” systems with some of the same weaknesses [emphasis original].”

That, it appears, is part of the reason that TrustTheVote wants to move briskly toward building its platform.

TrustTheVote has larger goals than mere vote tabulation, including analytics and demographics, but the core offering in its larger suite is that of making the process of voting itself unimpeachable, in my view.

The group is looking to raise around $6 million this year to fund its operations. TrustTheVote told TechCrunch that it has $1.3 million in commits so far for the year, including money from Facebook’s former Chief Privacy Office Chris Kelly. The group expects that it needs a total of $24 million over a four-year period to pull off its task. So, it’s looking to bring in $6 million yearly to keep itself afloat. It intends on spending raised funds to hire a number of product managers and build out its engineering team.

TrustTheVote has a cadre of old-school technologists on board, including Pito Salas (Lotus), and Hugh Dubberly (Netscape). In Miller’s view, “election technology framework is like an operating system,” so you need the mental capacity to execute something hard.

I don’t know if TrustTheVote will be able to pull off its goals and ship its open source software on large quantities of off-the-shelf hardware. But the organization’s drive is impressive. Miller believes that the majority of American voters will eventually cast ballots using TrustTheVote technology. By his estimation, that could happen as soon as 2020, a presidential election year.

The voting process in the U.S. will change forever if TrustTheVote can pull it off.

IMAGE BY FLICKR USER Charles16e UNDER CC BY 2.0 LICENSE (IMAGE HAS BEEN CROPPED)