Airlines are awful at Twitter, and should leave the platform entirely. I’m not the first person to say this, but today’s knock-it-out-off-the-park fail from USAirways’ Twitter account served as an excellent reminder.

No good can come from an airline being on Twitter, and here’s why:

Airlines are not known for their customer service or product excellence, generally speaking. In comparison to air travel a couple of decades ago, it’s actually very cheap to fly — but in relation to what most people make and what product is being delivered — the price is too high. They have bad customer service, flights are over-booked and uncomfortable and everything is dirty. In essence, very few people love flying. Many of us do it very often, out of necessity, and some of us are more comfortable than others, but there are a select few people who get off by walking through a TSA checkpoint. 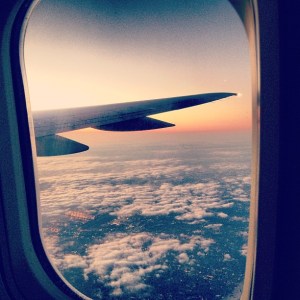 And what do people complain about a lot? The bullshit experience of going through an airport, being delayed without explanation or further details, then being carted onto a cramped tube full of people and recycled air, only to land and have your luggage missing and only airplane-stank clothes on your back. That’s an exaggeration, but almost every experience with an airline ends with at least one bad memory. One pain point. That pain point usually ends up on Twitter.

The third reason airlines should ditch Twitter is because timing simply isn’t on their side.

I tweet more from airports and airplanes and tarmacs than any other place, except for maybe my desk at home during work. I only fly about once a month, but generate an astounding amount of tweets during the travel process. This is because there is nothing to do and no one to talk to while you wait to board a plane. It’s also because people-watching is incredibly interesting at the airport.

The old couple next to me on the plane are adorable. “Bob, hold on. I’m texting. I’ll be done in a minute.” #trytenminutes

“Wonder what this button is for, may?” “It’s a picture of a lady with a cup… Probably the drink button.” #newfliers

Bob and May, studying the informational safety pamphlet as instructed. I love them. pic.twitter.com/5JePAOLYGO

This is all dreadfully boring for my followers, but it’s more exciting than staring at the chair in front of me on the plane.

And finally, things are pissing you off at the airport.

The dude who won’t stop screaming into his phone, who is all but destined to be in the seat next to you on the plane, and the constant updates that your flight is only thirty minutes delayed every thirty minutes for four hours are enough to make a person mad. Crazy mad, and angry mad. Mad enough to need a place to vent.

Plus, airlines have way too many disgruntled customers and far too much information to process to be good at customer service on Twitter. The purpose of being on Twitter, as a brand, is to field as much as you can, but also to be able to make broad announcements to your users. When HBO is having trouble with Game of Thrones, they can tell everyone all at once. When AT&T coverage goes down in the entire North East, they can tweet about it and we all know they’re working on it.

Airlines don’t have the same luxury. They have thousands of customers every day that are all on a different schedule, with a different itinerary. There’s no social media team in the world that can help those customers. They’re on their own.

Which is why when they tweet their rage at the Airline that has wronged them, they get nothing back. For hours. Until they hear some crap apology. Something like: “So sorry about the delay to your flight.” When really…

So, to sum it all up, this is what airlines are saying to people when they’re on Twitter:

“Oh hey guys! How’s it going? You bored over there, waiting for your plane? Got nothing to do but flip through your Twitter stream? You should maybe take out your headphones… I think the lady is making an announcement that your flight is delayed. You know, the one that cost you $400 and is getting you to your sister’s wedding on time? That’s the one that’s delayed.

You can tweet at me, but I can’t really help you that much. See, there are a hundred of you that were just delayed on that flight alone, and that is just one of hundreds of flights happening today. So, as you can imagine, my plate’s pretty full. And even if I could give you my undivided attention, there isn’t much I could do but say sorry. So… sorry.

There’s just simply not enough social media manager attention in the world to deal with all the ire that’s out there. And sometimes those over-tasked social media managers use their work computers to share gross pictures with their friends, and forget that they have those disgusting pictures saved on their clipboard.