Facebook could buy an anonymous sharing app like Secret, or build one, but would we use it? Facebook’s Snapchat clone Poke crashed and burned in part because people worried Facebook would spy on, save, or widely share their ephemeral messages. Facebook’s shaky track record on privacy could similarly scare us away from an anonymous sharing feature.

The problem for Facebook is that like ephemerality, anonymity is emerging as a whole wing of sharing that it currently doesn’t allow. Yes, we want to share things that live forever on our timeline. But we also want to share silly things that disappear, and controversial or emotional things we can’t tie to our names. Yet right now Facebook only supports permanent, identified sharing.

It seems reasonable that Facebook would want to change that. Zuckerberg himself told Businessweek that after insisting everyone use their real names for 10 years, that might have been too extreme. “I don’t know if the balance has swung too far, but I definitely think we’re at the point where we don’t need to keep on only doing real identity things,” Zuckerberg said. “If you’re always under the pressure of real identity, I think that is somewhat of a burden.”

Facebook could add a toggle switch for anonymous sharing to the status composer. “Share Anonymously” or “Share As [Your Name]”. Anonymous posts could appear to friends, friends of friends, or the world if they got really popular, just like on Secret. Or Facebook could bake ephemerality into Messenger.

But Just Because You Build It, Doesn’t Mean They’ll Come

Released in December 2012 after Snapchat rejected its acquisition overtures, Facebook’s Poke is the perfect example. It was even more functional than Snapchat, offering self-destructing video first, and the bonus of ephemeral texting.

However, the public perception of Facebook was firmly rooted in the idea of sharing things your boss or family might see, and that everything posted was tattooed on your profile. Facebook’s Snapchat clone also lacked the indie cool and organically built community of its inspiration. Poke saw so little traction it was eventually deprecated.

We just might not be able to escape the lurking fear that even if Facebook offered an anonymous sharing option, posts would somehow come back to haunt us. 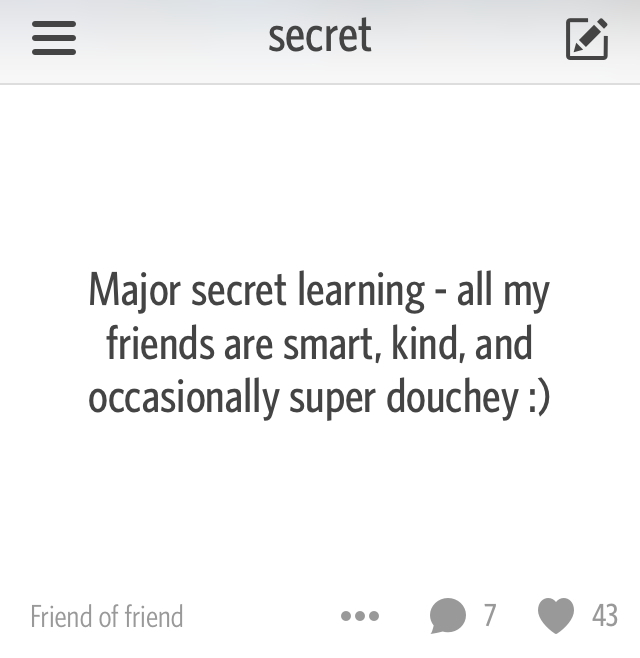 Right now, the fad amongst big tech companies is standalone apps. Facebook built a whole Creative Labs initiative to build them. Twitter launched #Music and then scrapped it. Dropbox just released a photo app called Carousel. And Google has over a dozen apps. The reasoning is that burying a feature deep with a Swiss Army Knife-stye core app makes it too slow to access and easily missed.

Facebook could try to get people on its anonymous train by minting a new perception with a differently-branded standalone app. Its shadow might still loom over this DeFacebook, though.

Perhaps the only way to make people trust Facebook with anonymous posts would actually be to make them trust someone else. Secret’s founders were said to be in talks with Facebook, but Mike Isaac debunked that with sources saying it wasn’t about an acquisition. Dan Primack says Facebook might still make a jaw-dropping offer to convince Secret to sell early and become its stab at anonymity. Zuckerberg has become known for bold launches and rapid M&A, so we might not have to wait long to find out the company’s anonymous strategy.

Beyond making the world more open and connected, Facebook’s recently expanded mission statement now includes “to give people the power to share”. The paradox is that the way it’s empowered sharing for a decade could preclude it from letting us show different sides of ourselves in the future.