Zoove, a company offering a registry of unique mobile numbers for brands and consumers (StarStar Brand and StarStar Me, respectively) is now introducing its third product, a contact-sharing service called StarStar myInfo. Available to U.S. consumers on any of the four major carriers, the idea with the myInfo service is to offer users a way to both share and receive updated contact details from their friends and colleagues without requiring a mobile app.

While the company’s brand-facing product has been used by 150 brands and merchants to date, including big names like CBS, Dunkin’ Donuts, Ford, Hyatt, NFL and Verizon Wireless, for over 500 individual campaigns, StarStar’s earlier consumer product (StarStar Me), while clever, is not exactly a household name at this point. That service lets you create custom vanity phone numbers, like **JANE for example, and allow you to manage how incoming calls are handled (e.g. ring, reply with text, block calls, etc.) as well as share contact info. The service has been adopted by T-Mobile, Sprint, Verizon and AT&T here in the U.S.

With StarStar myInfo, Zoove is looking to expand its earlier offering with a service designed primarily for contact sharing while allowing users to create different personal and professional profiles.

To get started with building a profile, users dial **myInfo (**694636) from their smartphones, which sends them a link via text message. Clicking the link takes you to a website where you can create your separate profiles or sync with LinkedIn to speed up the process.

To then share that profile with others, you can just ask them to dial ** plus your phone number. The recipient is then sent a text with the vCard, which they can click to add the contact to their phone.

In my tests, the first message I received said “Get contact card for [contact], tap [link]” where contact was the person’s name and link was a URL to click. That took me to a webpage confirming the contact details were sent to my phone*. A minute later, I received the vCard. (By default, the sender has to approve the request on their end, so the time to receive will vary).

To use the service, you’ll need a smartphone with a decent web browser and a text and data plan. OS support includes iOS 6+, Android 4.0+, Windows Phone 8+, and Blackberry 10+. All four major U.S. carriers are on board at launch, with others on the way. 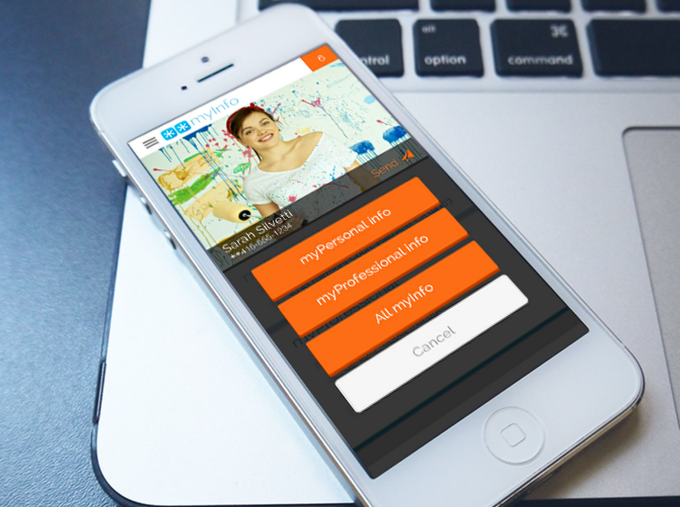 The benefit to sharing the contact info this way is that the sender can fill out their profiles with all the data they choose, including not just their name, number and email – which is what you would generally enter in face-to-face situations when you’re getting someone’s digits – but also things like websites, social media accounts, alternate numbers or emails, addresses, and a photo.

After sharing your profile with a friend or colleague, any time you later update your information on the service, those who had already received your vCard previously will automatically be sent an MMS with your updated contact info.

The service is a clever workaround for the problem with contact-sharing. Today, it’s easy enough to enter contacts into your phone, but they then become stale over time as your contacts change jobs or get new phone numbers or emails or move to new addresses. A number of startups, like recently acquired Cobook or Addapt, for example, have attempted to solve this problem with smartphone applications, where you automatically share updated profiles with others, but they’re limited to those users on iOS or Android who are also using the same application.

But StarStar myInfo shares its own adoption hurdles – contacts are only automatically updated if the user first connects with a friend by dialing their StarStar number initially. And while none of the steps involved in doing so are overly complicated, there are simply more of them than just typing in someone’s digits into your phone.

StarStar myInfo is free to use, but the company will market its paid service (StarStar Me, $3/mo) on its website.

* On T-Mobile and Verizon, you have to first visit the webpage before Zoove sends the vCard, on the other carriers you do not. Zoove is working with carriers to get this changed.