Aarthi Ramamurthy is standing outside of her building talking to her first paying customer, and she’s about to make a product decision.

She’s shipped him a camera across country overnight on a rental program, and he’s so in love with it that he wants to buy one from her. He’s wondering if he can apply his rental fee towards the purchase of the camera.

After quickly running the numbers in her head she replies “Yes!” The customer is happy and she makes Lumoid’s first camera sale.

Lumoid, a Y Combinator-backed startup, is a service that lets you rent camera equipment of all sorts and, if you like it, you can purchase it. There are some comparisons to be drawn between rental companies, such as lensrentals.com and others, and the “try before you buy” services, such Rocksbox.

But the model doesn’t stop there. There’s also a layer of sharing-economy magic built into the back end, as many of the rental units that Lumoid sends come from un-sold or un-rented inventory of brick-and-mortar retailers. This enables them to get use out of their existing stock and Lumoid to satisfy a customer by letting them get their hands on an expensive piece of equipment before shelling out the dough.

The best part? Rentals of lens and body kits start around $15-$25 a day. As a former pro photographer that was always struggling to afford the new gear I needed for the next job — that’s incredibly cheap. And since the fees accrue over a year, you’re not throwing away your rental dollars at the end of the term — which is a sweet deal.

This blend of models makes Lumoid a compelling case in a sea of “ship-to-you” services. Each camera or kit is sent to the customer completely ready to use, with a memory card and a Lumoid strap, if applicable. These can be anything from point-and-shoot units to lenses to holistic outfits that are set up for vacationers, wedding photographers and more. 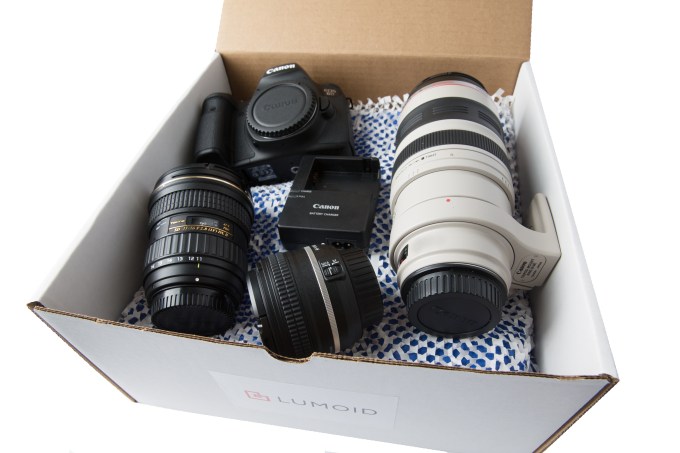 Lumoid is also working with hotels to provide ready-made rental kits that guests can tap into as a premium service. This also grew out of listening to customers, says Ramamurthy. As they began shipping rentals to customers, they got more and more requests to ship out kits to hotels rather than to people’s homes. This way they had a camera waiting in the room for them rather than having to truck them along in baggage with risk of breakage. When they’re done they can just keep the memory card with their images and get charged for it, or download the images and mail it back in the package from the hotel. No fuss.

Ramamurthy is now a serial entrepreneur, having co-founded the custom try-before-you-buy bra company True & Co. Before that she worked on building the consumer devices SDK at Netflix and on the Xbox Live team at Microsoft.

She described to me how Netflix used its massive amounts of data surrounding viewing habits to talk to studios and content creators. They know with such authority what people do like to watch that there are invaluable lessons to be learned about what kind of things studios should be greenlighting.

Lumoid is also gathering a lot of data about what users look at on the site, search for, rent and ultimately purchase. This data isn’t being wasted, either, as they’re already working with some manufacturers like PNY to create a dialog about the data in exchange for better rates on equipment. It’s a cyclical relationship, and one that could lead to better margins for Lumoid and a nice bonus flow of data for retailers.

I spent over a decade in photo retail and using photography to make a living, so the prospect of being able to try out a wide range of cool stuff from a Leica M9 to the latest Canon L glass is enticing enough. But that’s not what’s really intriguing about Lumoid.

The fact is that the photography market is an easy target. Ramamurthy and her team are interested in it and passionate about it, and that makes it a good starting point. It’s also an arena in which a lot of stress goes into making the right choice. But it’s not the only product segment that could benefit from this kind of model.

What Lumoid is doing is applicable across the breadth of consumer electronics, especially as those get more complex and more integral to our lives. The long-awaited “Internet of stuff that connects with other stuff” is only going to make every purchase more complicated and fraught with possible error. Which connected blender do you buy and is it compatible with your smart mixing bowl and fridge? What glucose monitoring bracelet should you get, and is it actually comfortable on your weird-shaped wrists?

This kind of expansion is exactly what Ramamurthy says Lumoid wants to do with its data-centric application of the rental and sharing economy model. If it’s able to capitalize on the photography market enough to become a trusted source for this kind of “comfort rental” then expansion to other verticals is a question of when, not if.