With today’s launch of Amazon’s Fire TV, the e-commerce giant’s first foray into the living room via a small, sleek set-top box offering both streaming media and gaming, the company will also cater to parents looking to better control what kind of programming their children can access and watch on TV. The feature, previously available only on Amazon’s Kindle Fire tablets, competes with Netflix’s “Just for Kids” option, though with some key differences.

While Netflix’s “Just for Kids” interface essentially introduced a section of the streaming service devoted to children’s programming, it wasn’t until the launch of user profiles last summer that Netflix finally answered its users’ desire for more personalized recommendations and real parental controls.

Meanwhile, Kindle FreeTime has long been one of the Amazon’s tablet’s standout features in terms of setting the bar for how parental controls settings should operate. With this option available on Kindle Fire devices, parents can block access to specific apps, services, purchases, social features and more, as well as set time restrictions and even set educational goals before allowing kids to play games or watch cartoons. 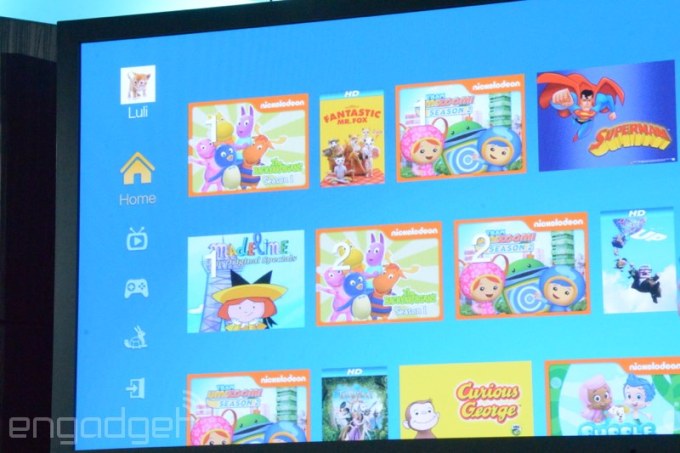 Now ported to Fire TV, parents will be able to take that same sort of control on the big screen, with content from Amazon’s video library. Using FreeTime for Fire TV, parents will be able to choose what content kids can watch, set time limits for the types of content and times of day – something the company says will be helpful to end the negotiating that takes place before bedtime. (Believe me, I know about this one.)

The kids’ interface is colorful and cute, with a bright blue background and easy navigation. The feature also allows for more general searches, which Amazon demonstrated today with a search for keyword “dinosaurs,” for example. 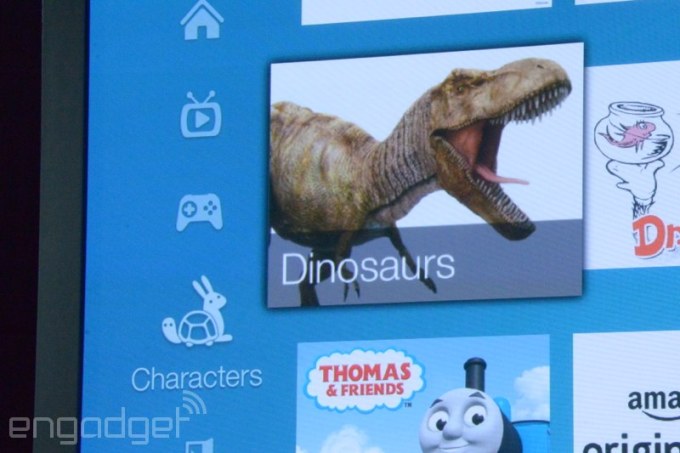 You can also surface content by popular kids’ characters, as well as filter by videos and games.

Plus, like on Amazon’s tablets, customers subscribing to the FreeTime Unlimited service, will receive all-you-can-eat access to movies and TV shows specially designed for children ages 3 to 8, as well as apps. Titles include those from well-known kids’ brands, like Disney, Nickelodeon, Sesame St., PBS and more. Amazon says there are over 2,000 educational videos offered today.

Kindle FreeTime Unlimited subscriptions start at $4.99 per month, while those with an Amazon Prime membership can pay $2.99 per month.

For parents who want more than Netflix’s simple controls which only allow parents to designate a viewer as a “little kid,” “older kid” or “teen,” in terms of what they can watch, without any of the whitelisting options, or time restrictions, FreeTime could end up being a big selling feature for the new device.