There are only a few companies whose mobile apps are so well done or engaging that they actually earn one of the precious few spots on your iPhone’s homescreen. Flexibits, the makers of Fantastical 2, one of the best mobile calendaring apps for iPhone, is among them. And today, the company will have a shot at claiming a spot on the iPad’s homescreen as well, with the long-awaited release of Fantastical 2 for iPad.

The best thing about this newly released, larger version of the iOS 7-optimized smart calendar and reminders app, is that it doesn’t feel like a whole new application you have to learn to use, with a bevy of features designed “just for iPad users,” so to speak. Instead, moving to the iPad-friendly version of Fantastical 2 feels like a natural progression from a smaller screen to a bigger one, where nothing is missing or out of place, and where the few changes that arrive are welcome instead of jarring. 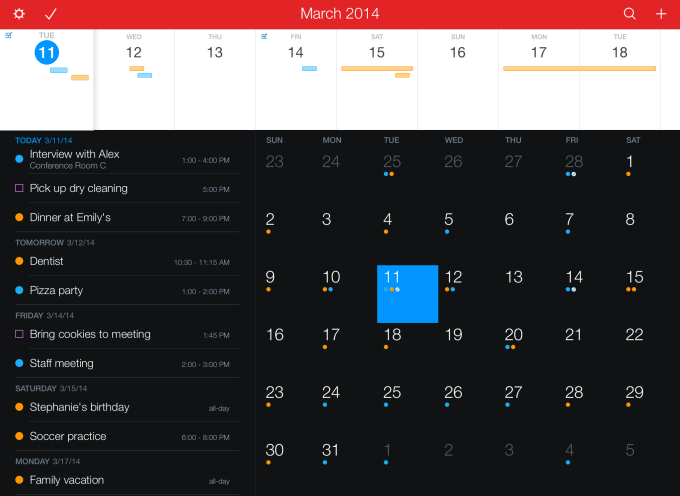 For those unfamiliar with Fantastical 2, the company has grown a devoted user base over the years because of its combination of good design and functionality. On iPhone, the calendar features a scrollable “DayTicker” at the top (which you can swipe to change to a monthly view) with a chronological list of appointments below.

Meanwhile, under the hood, Fantastical 2 uses a natural language processing engine, which allows you to enter events using everyday language and phrasing — like “Meet Craig at Sushi Bistro at 1 on Friday” — and a calendar entry for that event is created on your behalf. This feature also works for creating reminders by starting your entry with words like “reminder,” “to do,” “task” or “remind me,” for example.

Now on iPad, Fantastical 2 has been adapted to the bigger screen, with an option that lets you toggle between the DayTicker, a half-screen week view, and a full-screen week view. You’ll also see the usual event and reminders list alongside the current month’s calendar to the right, which is new. 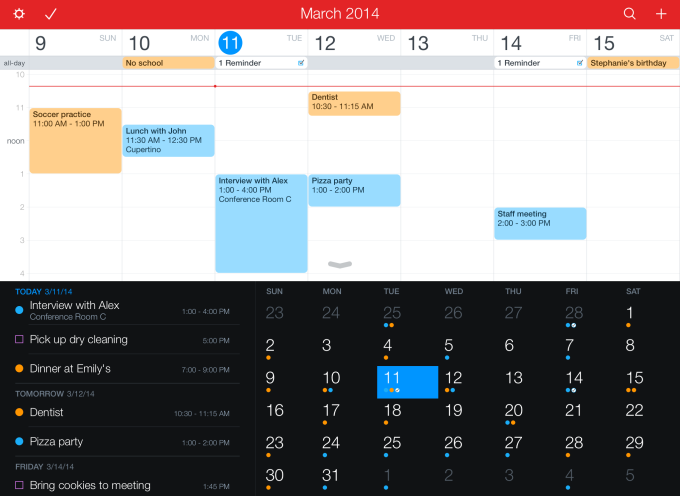 Reminders, which were integrated with the iOS 7-optimized iPhone app release last fall, will appear in the main events list. They can be added directly from either the Reminders list (accessed by tapping the check mark at the top of the screen, or via a swipe) as well as from the “new event” screen where a toggle switch lets you choose between entering a calendar event or reminder.

Meanwhile, swiping in from the right side of the screen brings you to a search view which you can filter by title, location or event invitees.

The iPad app is also optimized for iOS 7, with features like Background App Refresh, Dynamic Type, and 64-bit support for the iPad Air and iPad mini with Retina. And, of course, it looks great in landscape mode where it has so much more breathing room than on iPhone. 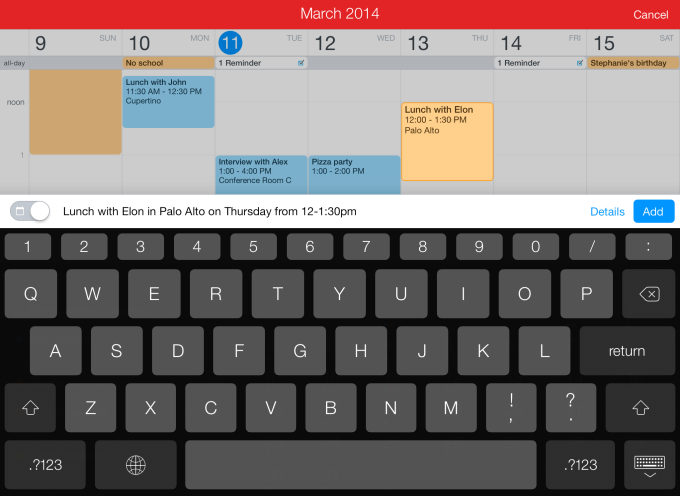 According to Flexibits co-founder Michael Simmons, native support for the iPad has been something Fantastical users have been asking for since the company first brought its previously Mac-only app to the iPhone back in 2012. The app soon became the first calendar app to hit No. 1 on the App Store (in paid apps), and the plan was to introduce the native iPad version next. But a little thing called iOS 7 got in the way.

“We were working on iPad for a while in early 2013. Then WWDC happened in June,” Simmons explains. “Of course, we saw iOS 7 and knew we immediately knew how awesome it was, and that we had to rebuild Fantastical for it,” he says. The company then took several of the features they were working on for the iPad version, including the week view and reminders integration, and released them in the new iOS 7 app, Fantastical 2, which arrived as a paid upgrade in the App Store, eventually hitting No. 1 also. 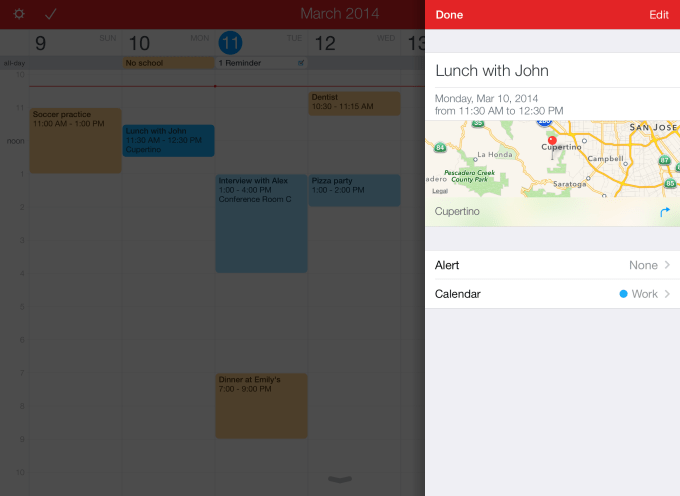 What’s Next: Mac Update & New Apps, Including A Contacts App

To some extent, this is why the iPad version is rolling out without a host of brand-new features at launch — they had already arrived on iPhone first. Now the goal is to get all the Fantastical apps on the same page in terms of their feature set. And yes, that does mean that an updated Mac app is next, though Simmons won’t promise an ETA.

“We do develop [Fantastical] as a single product even though it’s three separate apps – Mac, iPhone and iPad – and even though each app is developed individually and takes time,” he says. “There’s still a common thread that this app needs to feel, and act, and behave a certain way.”

Now that the company has addressed all Apple platforms, desktop and mobile, the question for Flexibits is what comes next, after the Mac app refresh: more apps? Android? As it turns out, the answer may be “both.” Simmons says while obviously they’re loyal Apple fans and developers, they’re considering bringing the Fantastical experience to other platforms, including Android.

But the company is also preparing its next product, a Contacts app which will launch on Mac first. Again, no timeframes were provided on either of these projects, but Simmons would say that the Fantastical for Mac update would be the next to launch. 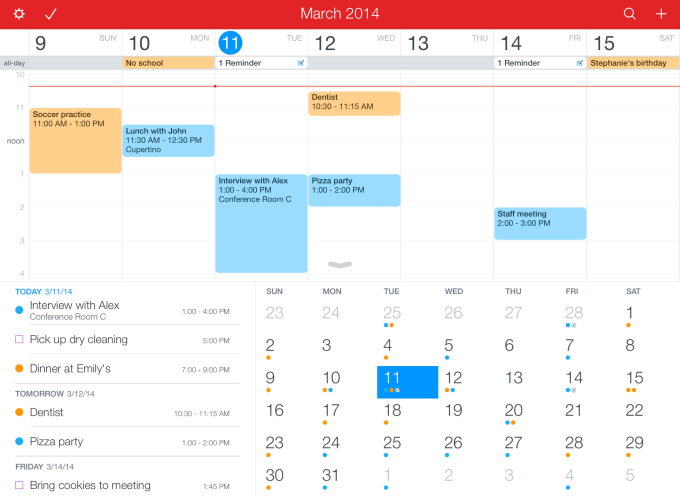 As per usual, the new application is being released as a paid upgrade, starting at $9.99 for a limited time. This is to allow those regular Fantastical users who already paid for the iPhone release a chance to grab the updated app, which is not universal, at a discount before it becomes $14.99.

The company’s decision to charge for each new app release has sometimes been controversial, but keep in mind that the company is self-funded, not VC-backed (though that option has always been on the table, as have been acquisition offers, says Simmons.)  At the end of the day, the company has to fund development, and for those who feel they need the Fantastical 2 app, the $5 or $10 fee probably won’t break them, says Simmons.

“We know we’re competing with free,” he adds. “We need to be the best calendar app we can be, and we need to sell it at a fair price.”

The new app is available for download here on iTunes.