Voxer, makers of a push-to-talk mobile messaging service, is rolling out a significant upgrade today of its iOS application (version 3.0) with the introduction of a redesigned user interface, speed and battery life improvements, plus new features, including read receipts and unlimited data storage.

The company, for background, has long stood out among competing mobile messengers because of its focus on voice.

The app offers the usual complement of mobile messaging features like sharing text, photos and your location, but its main differentiator is a walkie-talkie-like functionality where messages are both sent live and recorded, where they’re saved in an inbox.

This has made Voxer a popular alternative for businesses where walkie-talkies or push-to-talk cell phones were once used, such as in the construction industry, hospitality, field services, and elsewhere. At $10 per user per month, Voxer argues that its business service is actually cheaper than the various push-to-talk options, while also offering a business dashboard for administering employee accounts, and more. 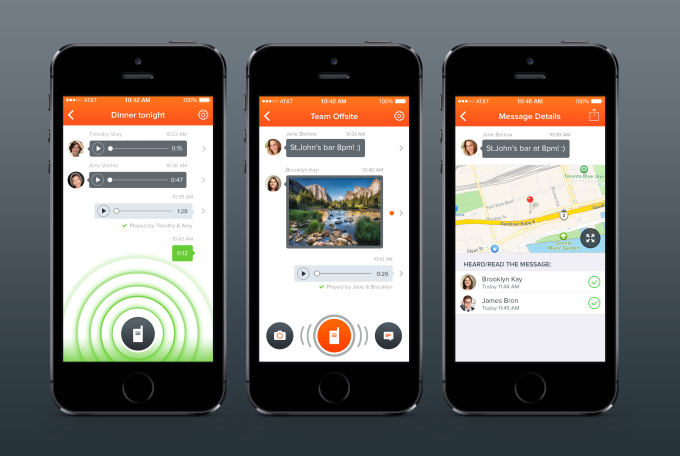 “Voice has been the dominant piece for our app, and in fact, most users message most consistently with voice in our app, which I think is different from other apps in the messaging space,” explains Irv Remedios, Voxer’s head of product, on why Voxer is unique. “The premise is that, although voice is still an extremely good way to communicate, the tools that we have to communicate using voice aren’t the best,” he adds.

Though the company doesn’t share specifics in terms of user numbers, it says there have been “tens of millions” of downloads of the Voxer app, and over 50% of messages on the service are responded to within the first 16 seconds, indicating an engaged user base.

With version 3.0, Voxer has finally updated its mobile app with a flat design that’s more consistent with iOS 7, and made its push-to-talk button 26% bigger for easier access. The company has also taken advantage of improvements in the networking layer (with iSPDY) to lower latency and improve message delivery time. And it’s now pre-loading messages to reduce the time it takes to load the messages once the app is launched.

The company has made improvements to its audio engine, too, in order to better preserve battery life, and has added a couple of notable features, including support for read receipts and unlimited data storage, meaning Pro users can now keep an unlimited number of their audio, text and voice messages.

In terms of real-world functionality, however, probably the best improvement is that the walkie-talkie feature now runs in the background, even when the screen is locked. “You can still receive audio content from Voxer – it will stream through, much like a walkie-talkie will do,” says Remedios. “So you no longer need to be in the application at all.”

That latter feature may make Voxer less appealing to more casual consumer users, since there’s an interruptive nature to walkie-talkies that not everyone wants in a messaging app, but should be welcomed by Voxer’s business customers.

The company, you may recall, shifted its focus last year to cater more to business users after finding the many in the Fortune 1000 were using the service, and were willing to pay for additional features, including the administrative functions and integrations with Active Directory for single sign-on, for example.

The updated iOS app is out now (correction – it’s hitting at 10 AM PT we were told after publication, due to a company miscommunication), as the Android app already saw a refresh last year.