In what seems to be the beginning of a real-life Wall-E situation, Philips has introduced an even easier way to control your home’s Hue smart lighting system. Because, you know, fishing your smartphone out of your pocket when you want to switch the lights will probably exhaust you to the point of hospitalization.

Lazy factor aside, the Philips Hue Tap is actually a clever little gadget. It is a $59.95 device that sits in your home, on a table or what have you, and lets you control the lighting of your room with a tap. Even more impressive, the Hue Tap doesn’t need to be plugged in. It draws zero watts, and instead uses kinetic energy from your tapping to power itself. This little accessory will be on sale in North America and Europe with Philips retail partners starting after this summer.

Of course, to use the Hue Tap at all you need the Hue Bridge, as well as a few Hue lightbulbs. The starter kit goes for around $200 at Apple.

However, you also have the option to purchase a Hue Bridge, the brains of the operation, and get cheaper, LED lights that were also announced this morning. They’re called Hue Lux LED bulbs, and they come with all the same smart controls as the regular Hue lights except the clever color functionality. That means you can use a Jawbone UP to trigger turning them on in the morning, among other neat tricks via third-party apps. They’ll go on sale with the Hue Tap later this year. 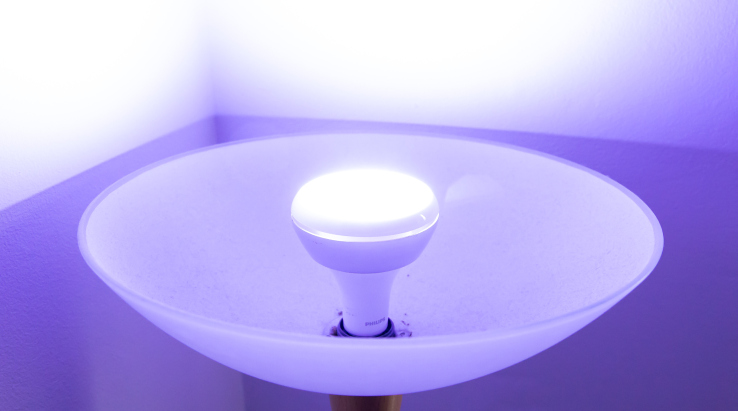 Philips was an early entrant in the smart lighting space, which is now being crowded by other appliance manufacturers like Samsung and LG. However, Philips has a product that is established and reliable, and gives you the option to add a splash of color to your life. Plus, many have already invested in their starter kits, so it makes sense to stick with the same brand.

If you want to get down to brass tacks, the Hue Lux is $39.95, while the new Samsung bulb announced yesterday that does basically the same thing hasn’t been priced, but should be somewhere between that and the $32 LG charges for its own smart bulb, also announced earlier this week. Something tells me these consumer electronics makers knew roughly each other’s plans in terms of the rough timing of these launches. These new bulbs with more limited functionality are much more affordable than the existing Hue bulbs, which cost $60 a piece, making it expensive to outfit a whole home.

Finally, Philips is also introducing the Hue Luminaries line, which is a series of 3D-printed Hue table and hanging lights that will be pricey, Europe-exclusive and more works of art than home appliance. Fancy stuff, but maybe this signals that you’ll be able to 3D print your own Hue-compatible lamps at home in the future, rather than depending on exclusive, high-end and high price designer models.

What more could you want?

Oh, right… A tapper to turn those colorful lights on and off, because you’re so lazy.