A team of ex-Spotify engineers has raised $2.2 million in seed funding for Lookback, a platform allowing developers to record onscreen activity within mobile apps – and even record the user’s face and voice, so they can explain what they’re doing when they encounter a bug or some other problem. The round was led by European investor Lakestar, and saw participation from Index Ventures and other angels, including Ilya Sukhar, co-founder of Parse.

The idea for Lookback actually began at Spotify, when Lookback co-founders Jonatan Littke, previously the lead web developer, and Joachim Bengtsson, the lead iOS developer, were talking to one of Spotify’s user experience designers, who was frustrated about her inability to access what are known as “pure” user experiences.

“Pure,” meaning those experiences where the user is not in some sort of test lab setting or is being told what to do, but is rather using the application on their own in an unbiased way. (That’s also the way I prefer to test startups’ apps, for what it’s worth. It really helps to identify the UX and UI issues, when you’re not given a tutorial – a crutch that many companies too heavily rely on today in order to get their new users up to speed.)

After identifying the problem, Bengtsson ended up creating a software solution that would allow a mobile developer to capture the screen, and the end user behind the screen using the front-facing camera, and the two left Spotify to work at Lookback full time. Littke’s brother, Carl, also a web developer, soon joined the team, as well, and a public beta was launched last September.

Until now, Lookback’s plug-in (an SDK) has been available for installation in pre-release apps, like those distributed on services like TestFlight, where it can be used to help collect bug reports. End users are prompted to activate the service by shaking their device to make a record button appear. After pressing record, everything on the screen is recorded. Meanwhile, the front-facing camera is also activated, so the user can talk about what they’re doing and what’s going wrong. (Here’s a demo). Today, the company is releasing a new SDK that can be integrated into existing apps in the App Store, not just test versions. An opt-in experience, the updated plug-in allows any user to become a UX tester, who can report on bugs and leave comments about the UI and UX issues they encounter. Likely, many developers would like to offer some sort of solution like this, so they can redirect users to help the company collect data about the problems they see instead of having them angrily post App Store reviews.

However, Lookback already has a number of competitors that allow for onscreen recording of user sessions, including those TechCrunch has covered in the past, like Y Combinator-backed Watchsend or UserVOD (now Appsee), for example. There are also established services like UserTesting and Usabilla, which offer panels of users, so developers can watch them interact with their software.

But Lookback is interesting not only because it’s also recording the end user interacting on their own, but also because of the video quality.

The recordings are then stored on Lookback’s servers and organized in a dashboard-like interface, where developers can filter the results to see just those related to a particular section of an app, or those recorded from a specific app version or device, and more. 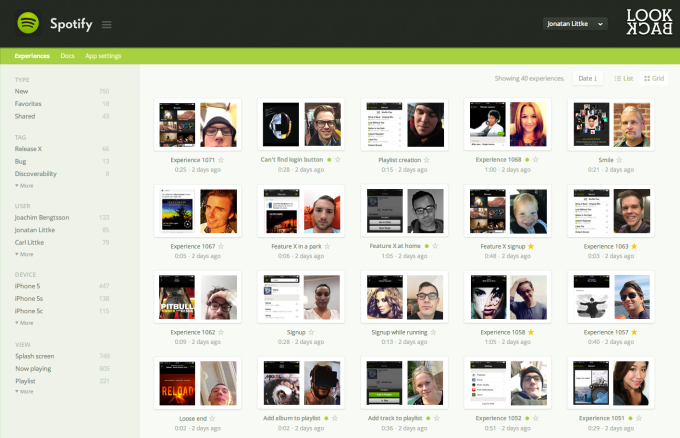 Today, the iOS-only solution is available for free, though the plan is to charge on a subscription basis (pricing TBD) in the future.

Lookback is now being used by 4,000 total companies, including Spotify, King.com, Yammer and Venmo, as well as other large firms, like banks and airlines. Combined, they’ve recorded 15,000 user experiences to date.

The new funding will allow the Stockholm-based team of three to hire additional engineers, as well as designers, product managers, and UX researchers. We’re told the goal is to build a distributed team, with the intention of adding 10 to 15 more employees give or take over the course of the year ahead.