At its Cloud Platform event in San Francisco today, Google announced a number of massive price drops for virtually all of its cloud-computing services. The company has also decided to reduce the complexity of its pricing charts by eliminating some charges and consolidating others.

Google Compute Engine is seeing a 32 percent reduction in prices across all regions, sizes and classes. App Engine prices are down 30 percent, and the company is also simplifying its price structure. 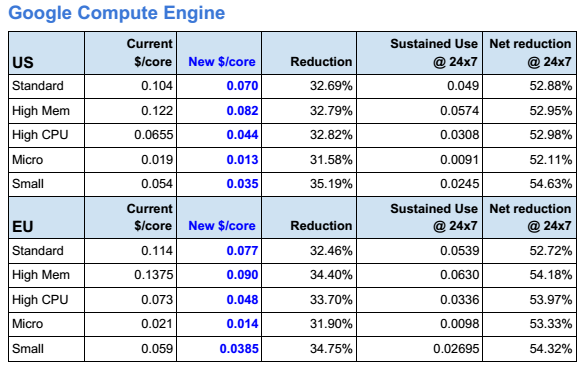 The price of cloud storage is dropping a whopping 68 percent to just $0.026/month per gigabyte and $0.2/month per gigabyte/DRA. At that price, the new pricing is still lower than the original discount available for those who stored more than 4,500TB of data in Google’s cloud.

The prices for other cloud storage options, including Cloud SQL and the Cloud Datastore, aren’t changing in this round of updates. I would be surprised if Google didn’t soon make some changes there, too (or unify its storage pricing across these services).

As Google’s Direct of Product for the Cloud Platform Greg DeMichillie told me last week, the industry has somehow moved away from the original dream of the cloud over the last few years. Provisioning servers in the cloud was supposed to be simple and cheaper than doing it yourself. But setting up a cloud server now often involves plenty of work, and cloud pricing hasn’t exactly followed Moore’s law.

Public cloud prices have dropped 6 to 8 percent annually, but hardware costs actually dropped 30 to 45 percent annually. “It’s certainly true that there is more to the cloud than just hardware,” DeMichellie told me. “We are trying to rest this industry’s prices back to where they should’ve been if they followed this law.”

In an effort to simplify pricing, Google will now offer automatic discounts to users who run sustained workloads on its cloud. Instead of having to deal with reserved and pre-paid instances, which are their own kind of lock-in, Google will now automatically give all developers on the platform discounts when they use a machine over a longer period of time. These discounts kick in automatically after the first quarter of the month and get deeper as the month continues. Then prices reset again at the beginning of the month and the cycle repeats. Even if you just use the service for two separate weeks per month, the discount will kick in for the second week.

On Compute Engine, developers who use the service 24/7 can see price drops of over 50 percent. This way, if you want to change to a different instance type after a month, you aren’t locked in and you don’t lose your discounts. 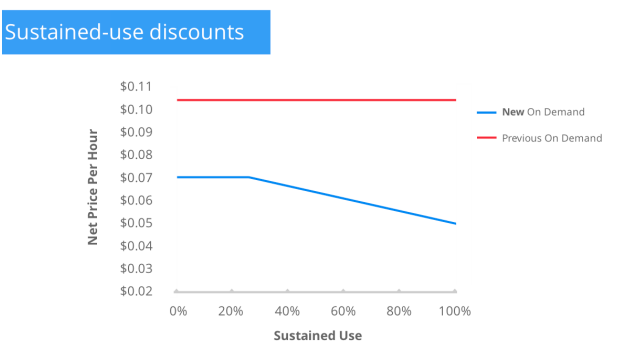 Even without the sustained use discounts, Google’s pricing now undercuts that of its competitors for on-demand pricing and is often lower than Amazon’s EC2 prices for reserved instances, too.

So far, Google, Amazon and Microsoft have always matched one another’s cloud-hosting prices, and chances are, we will see price drops from Google’s competitors in the coming weeks, too. Amazon, of course, is hosting its own cloud-centric event later this week and we will likely hear more from them about pricing, too.