Pantheon is one of the most popular website platforms for Drupal, but today, it’s also expanding into hosting WordPress installs.

The service aims to abstract all of the complexities of hosting away so that developers and designers can focus on what they do best and those who just want to use WordPress as a CMS can focus on content. At the same time, though, it also gives developers full access to their code and features like Git support, while designers can continue work on their templates just like before and then upload to the site.

Unlike other hosting companies, Pantheon made an early bet on a container-based architecture that allows it to quickly scale. The company argues that this technology allows it to scale servers up and down faster and with over 100,000 Drupal installs on its system, it also allows the company to run its infrastructure without having to spin up 100,000 virtual machines on EC2.

As Pantheon CEO and co-founder Zack Rosen told me, the company built its own network-backed filesystem (called “Valhalla“) to make all of this work. The platform also uses a mix of cloud platforms itself and large cache to ensure speed.

What Rosen stresses most, though, is that the company’s users don’t have to worry about any of this. They get separate environments for development, staging and deployment and the service handles all of the backend infrastructure.

Pantheon currently counts about 2,600 enterprise users among its clients, including Intel, Cisco and the United Nations. The company expects that given the popularity of WordPress, it will quickly sign up new users. According to some estimates, WordPress powers more than 20% of all of the sites on the Internet already and Rosen tells me that his users have long been asking for WordPress support.

Because the company’s infrastructure was designed to be flexible, it took the team just over a month to get ready for hosting WordPress sites. “99% of the old part was reusable,” Rosen told me. What needed to be changed were the integration points between WordPress and Pantheon’s cache and other tools. 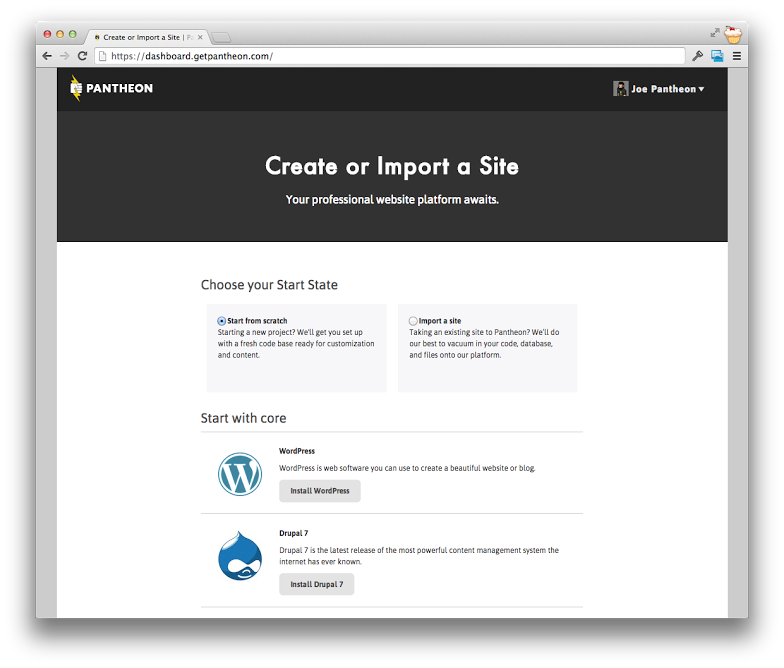 Why did the company, which was founded three years ago, wait this long to offer WordPress support? Rosen argues that because the team came out of the world of Drupal consulting, that platform was the obvious choice for them. He also noted that over the last year and a half or so, WordPress has been gaining significant mindshare with marketing departments and in enterprise companies, so the company felt that now was the right time to make this move.

“WordPress is a mature product that is being embraced by website developers and marketers globally,” Rosen said. “With Pantheon’s Professional Website Platform, developers now have free access to professional-grade tools and services for the world’s most popular open-source CMS. We eliminate hosting to deliver far higher performance, better visibility and ‘enterprise level’ support.”

Developers can get a free account on the service to start working on their WordPress and Drupal sites for their clients (without the ability to link them to a domain name). Personal accounts for a single site start at $25/month, which is in line with what you would pay for a VPS host.

While Pantheon is marketing itself as a hosting service for professionals that is going after developers, designers and marketing teams, the basic paid plan may appeal to individual or small business users who just want a good paid host for their websites, too. Professional accounts with support for multiple sites start at $100/month and users who want to make use of Pantheon’s tools for teams pay $400/month.

While Pantheon didn’t have all that much competition in the Drupal space, though, it now goes head-to-head with the likes of WP Engine, Media Temple (which also charges $29 for its most basic accounts, which include three sites) and others who specialize in WordPress hosting.