Motorola hosted a live Hangout with Jim Wicks, the lead designer of the Moto 360 Android Wear-based smartwatch, and the discussion started with the inspiration for the product and moved to its specifics. Motorola wasn’t yet sharing that much about specs and details for the hardware, but the smartwatch actually works as Wicks used it on camera, proving this isn’t just an ambitious render, and that’s a big load of the minds of those looking forward to owning one.

Wicks was emphatic about the Moto 360’s roundness; he said round at least 1,000 times by my admittedly inaccurate count. The purpose behind this was to get users on board with the idea without having to sell them on something they aren’t used to. 85 percent of watches sold have a round face, according to Wicks, and that’s what people are looking for in a time piece. Wicks also points out that this is a design that’s been associated with telling time throughout human history.

“We’re going to map the tech to the consumers, not the other way around,” he said. “We’re not going to try to make consumers change for this tech.”

It’s a fair point – most smartwatches these days have assumed that consumers would seek them out for their own intrinsic worth, but Motorola looks to be lowering the barrier to entry starting with approachable design. Familiarity might be the best way to break smartwatches out into the mainstream consumer crowd.

Likewise, the team wanted to created a device that used high quality and comfortable materials to make it more approachable, so they embraced stainless steel and genuine leather bands. The bands are also interchangeable, and Wicks suggested different versions would come later to make the Moto 360 more compatible with smaller wrists. He said they’d be easy for users to change on their own after purchase, but didn’t go so far as to claim they’d be compatible with existing watch bands, which makes me suspicious they’ve employed a proprietary connector between band and watch, much like Pebble did with the Pebble Steel. 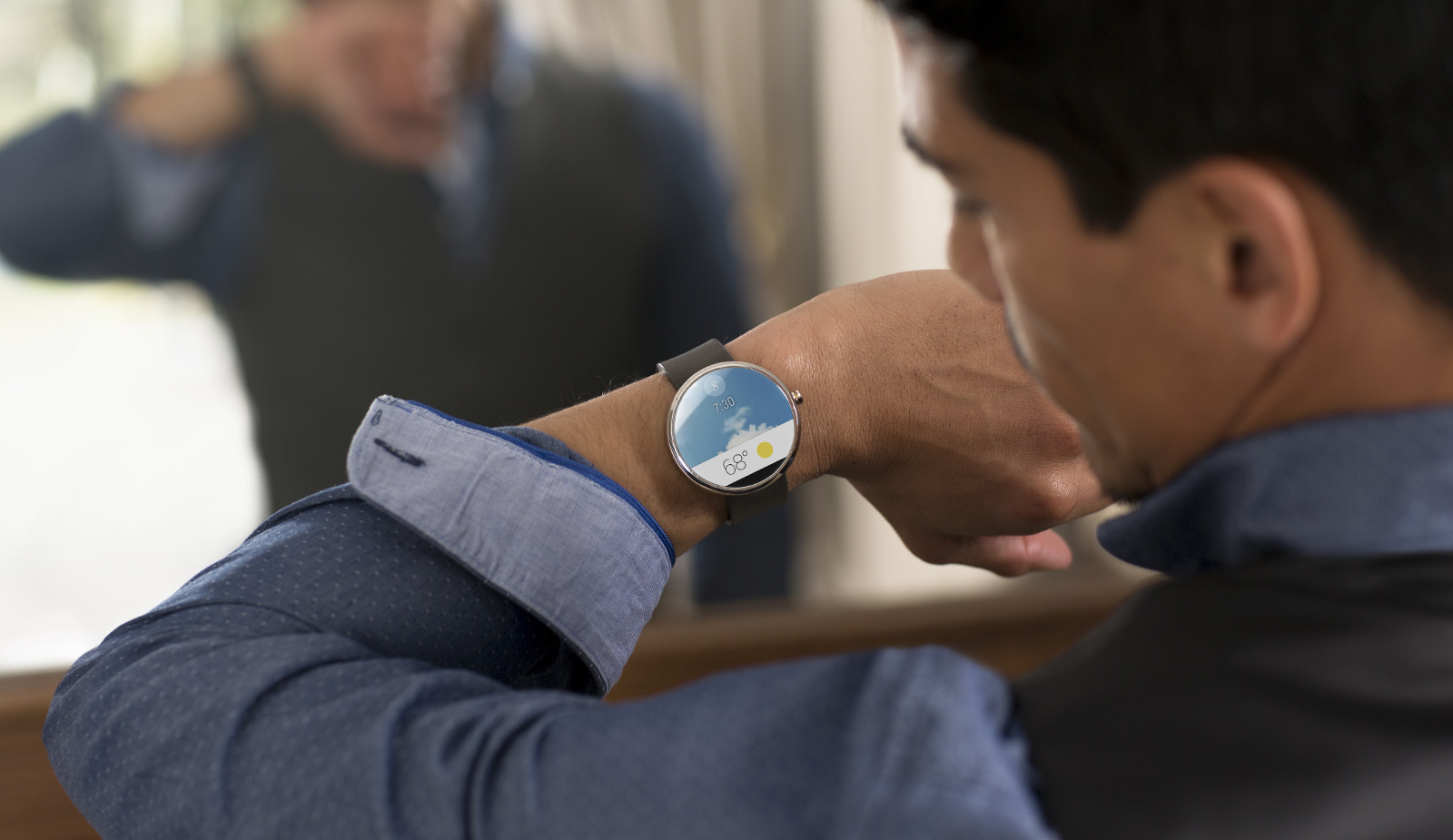 The whole design is aimed at comfort, too, and that’s partially why they opted to go round. Wicks says that the same amount of diagonal screen real estate in a square watch would make for edges that dig into the wrist, so the Moto 360 is actually much more comfortable to wear as a round watch, too. Plus, the display he says is more readable, drawing attention to the center for at-a-glance info, with white space surrounding UI elements in a way that adds focus. The UI is also designed to rotate so that the watch can be worn on either wrist.

Wicks didn’t share much new information around the barebones hardware specs for the Moto 360, but he did say it would be somewhat water-resistant, and that there’s no external ports for charging or data access. Instead, the watch has an alternate charging method that Motorola is keeping under wraps, which I’m guessing is either induction- or kinetic (motion)-based.

The battery is also said to be a primary concern, but Wicks wouldn’t comment on how long it’ll last when it ships. He did note that the design team (which also built the Droid Razr and Moto X) learned a lot from the MotoACTV in terms of energy management, and that those lessons in fact informed the Moto X before this, too, and its ability to intelligently display smart notifications while retaining long battery life. 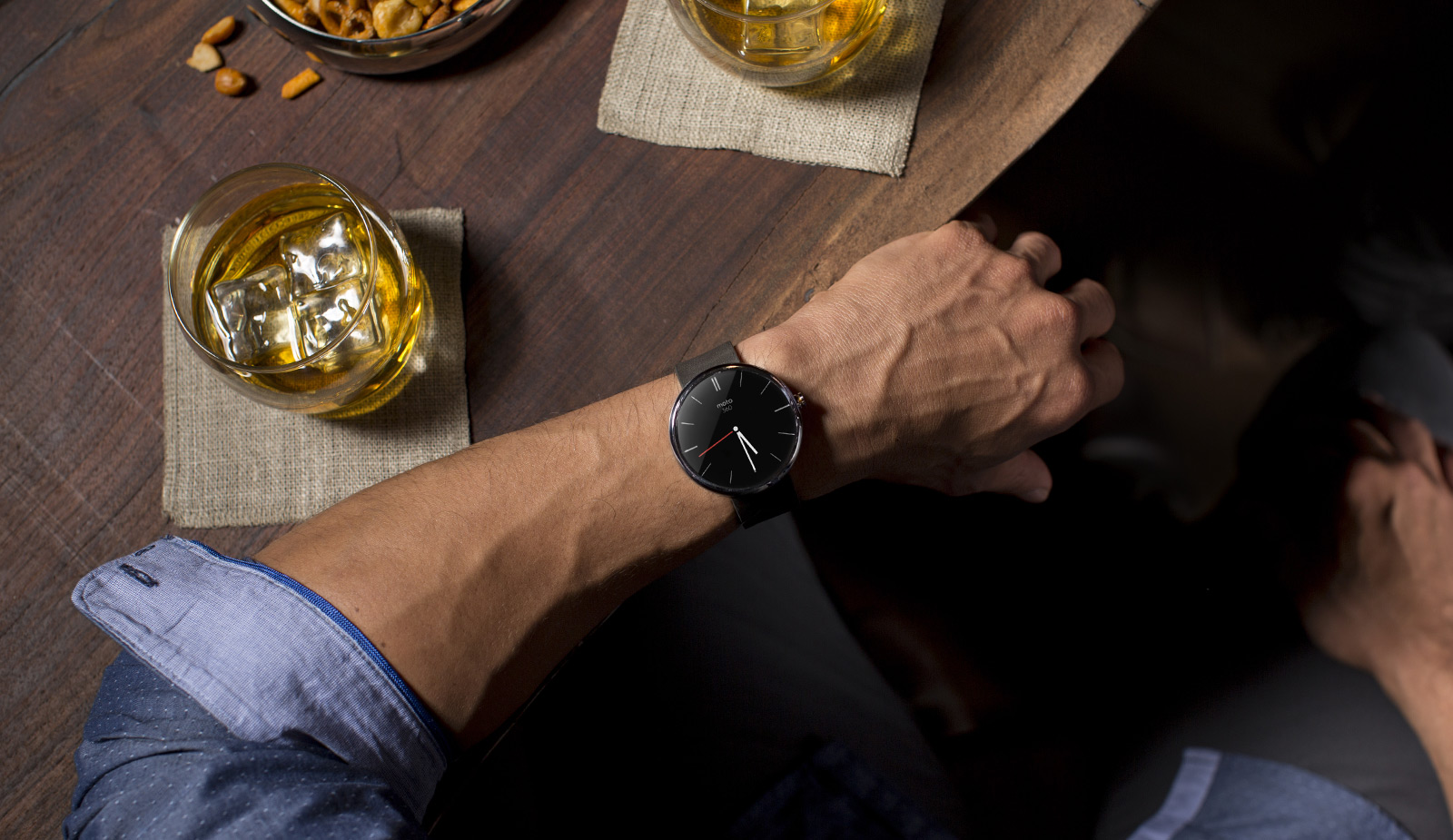 It’ll help that there’s no camera in the watch, as Wicks confirmed, and that it seems designed almost wholly based around the core concept of presenting contextually relevant information from your smartphone when you need it, rather than for cramming as many bells and whistles as possible into a small space.

Pricing for the unit wasn’t revealed, but a question about international availability did prompt Moto to say they plan to roll it out globally in due time, after its initial summer launch. As for device compatibility, the Moto 360 will work with “all Motorola Android smartphones,” and with any Android device running Android 4.3 or later.