Over a decade ago I was a happy man. In about 2002 I bought an Archos Jukebox. It was a 6GB monstrosity, clad in metal and full of huge batteries, and it contained a clicking, whirring 2.5-inch hard drive. I used it to listen to music and even hacked it to run a home-brew operating system complete with games and media controls. For a while I was quite content with my crazy MP3 player and, although the iPod was rising in popularity, I felt no compelling need to replace the Archos.

After all, it worked. 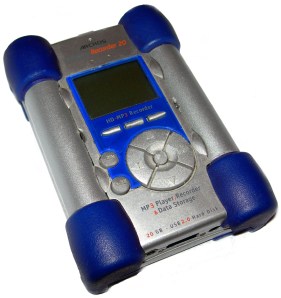 But Apple kept at it and I began using Macs more and, suddenly, splat, Archos was dead to me. The same thing happened to Creative and Sansa and other MP3 player makers. In an instant the market was smashed by a newcomer. If you made MP3 players you were playing a losing game. There was no value in it.

The same thing is about to happen to smartwatches thanks to the rise of Android Wear. Pebble, in other words, is about to get the anvil and be squashed flat, and I say this as a lover of the product and the team who made it. Wearables was a niche that needed disruption but, in the end, will be further disrupted by the biggest players in the market. The company that won the battle will lose the war.

No one is going out of business. There will still be a few orders by die-hards, but as evidenced by the lack of MP3 players on the market there will be a time when the big guys will win out. It happened in the cellphone world. Where once you had myriad feature phones and smartphones, now you basically have the Galaxy line and the iPhone. All other competitors are just treading water.

Wearables, for most of the past five years, have been a mess. The best devices are awful and the worst devices are unusable. This gave Pebble an excellent opportunity to make an amazing product. And they took it, knowing they had a “multiyear” lead on the competitors. Their dedication to simplicity and usability have made them a darling among discerning nerds and no one has quite matched their utility and battery life.

But once Android enters the market, all bets are off. If Android can bring usability and battery life to LG and Motorola-branded smartwatches, it will be over for Pebble. Why buy a niche product when you can buy from a major brand? And everything Google and Android touch is, at the very least, beloved by a subset of users. The same can’t be said of Pebble, no matter how strong the sales.

Luckily not everyone is doomed. Fitbit still owns the “fitness” space and, given the battery requirements of monitoring devices, it will be tough to, say, leave the heart rate sensor on your Galaxy Gear all day long. It can be done — Basis did it — but there are tradeoffs.

Maybe I’ll be wrong. I hope I’m wrong. Maybe Pebble will fit into another niche while the wear devices become popular among Android users. But when a major player with a proven track record smashes into a market, there’s really no hope for the incumbents.