iOS 7.1 has already made its way onto as many as 12 percent of active consumer devices capable of running it, according to online ad network Chitika. The firm found that web traffic hitting its network went from 5.9 percent after 24 hours, to 12 percent after 45 hours, which is roughly on par with the adoption numbers the firm witnessed for iOS 7.0.6.

Apple released iOS 7.1 March 10, and the update brings a number of visual refinements, as well as a host of new software tweaks including support for CarPlay, changes to the way in-app purchases work, and more. The update is the first major (i.e., non-maintenance) update for iOS 7, Apple’s major visual overhaul of its iPhone-powering mobile OS. 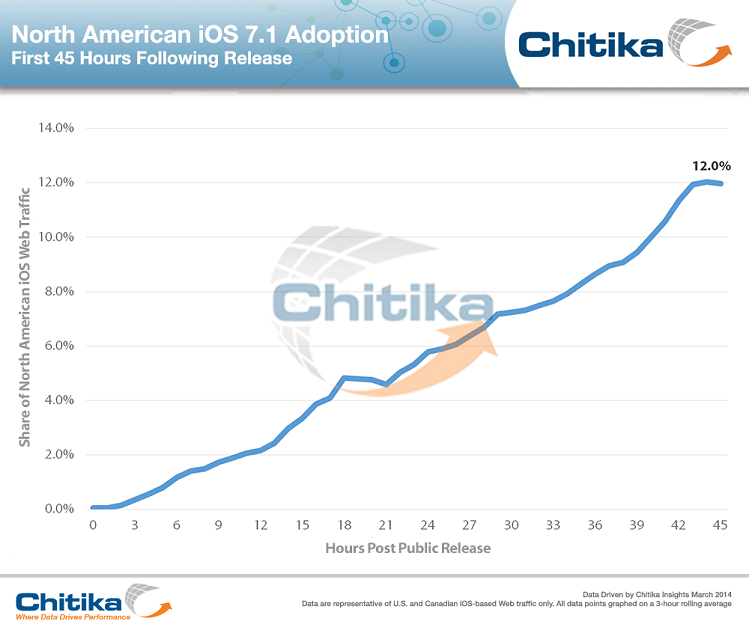 These numbers are not the same as everyone is seeing: Mixpanel’s real-time iOS version tracker shows 7.1 at just 0.24 percent for the current day [EDIT: Correction, the single day stat actually shows just under 16 percent, I’d inputted the dates wrong], which is perhaps down to the different business types. Mixpanel is a mobile analytics firm for a variety of software, while Chitika powers online ads and surveys a sample pool of tens of millions of iOS impressions across the U.S. and Canada specifically.

iOS 7.1 adoption appears strong, and is around as quick to be taken up as the important, security-focused 7.0.6. Chitika says that overall across all versions, iOS 7 represents 80 percent of iOS-based web traffic during the same period, so in general that’s a good sign that the redesign has not proved a major inhibitor to consumer updates.